A Holiday of Giving Thanks: Altered Traditions and New Beginnings

This year, many traditions have been altered due to COVID-19, including the Thanksgiving holiday, which is typically the most traveled holiday of the year. Normally, homes are filled with friends, family, and a feast fit for a king, but 2020 has brought unexpected changes and possibly new traditions to Coronado teens and their families.

Coronado High School (CHS) freshman Keira Sardiello took a short drive to nearby Carlsbad, where she visited family members. Her extended family maintained social distance and donned masks, but those were the only changes to her Thanksgiving traditions.

Others decided not to travel at all during the week-long break. CHS student Andreana Frangos’ family normally hosts Thanksgiving, but a decision was made to keep this year’s celebration to immediate family members. Along with her parents and two sisters, Andreana watched the Macy’s Thanksgiving Day Parade and the Kennel Club of Philadelphia’s National Dog Show online. Broadcasted on NBC, the Macy’s parade was shortened from a two mile-route to a single block. Spectators were discouraged, and the number of balloon handlers were decreased from 2,000 to 130. The National Dog Show was aired at noon, and featured 600 dogs, pared down from the usual 2,000 entries, again with no spectators permitted.

Andreana’s house is usually brimming with cousins, uncles, aunts, and grandparents on Thanksgiving day, but all convened on the communication platform Zoom instead of meeting in person. After chatting and catching up on the latest events, Thanksgiving dinner included turkey, stuffing, peas, mashed potatoes, gravy, cranberry sauce, sweet potatoes, and ham. 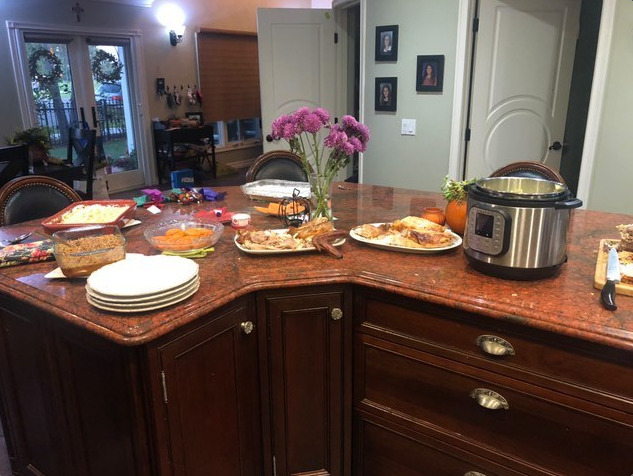 Dylan Berk also celebrated Thanksgiving much differently this year. Normally, he and his family would visit his grandparents and cousins, but they decided to stay at home and gather only with immediate family members. His family opted to FaceTime relatives instead of meeting in person. The Berks then feasted on a delicious raclette, a Swedish cheese dish, instead of the usual turkey.

“This year’s Thanksgiving was fun, but it could have been better. I really wanted to visit my grandparents and cousins but couldn’t. I had a fun time at home, but it just wasn’t the same as Thanksgiving normally is,” Dylan shared.

Dylan hopes that everyone will take precautions to slow the transmission of the coronavirus, and ultimately be able to visit family and travel again.

Sophomore Maddie Cannon is fortunate to have relatives in town; her father’s side of the family lives locally. This holiday was still extremely different than previous years. Instead of spending Thanksgiving with her mother’s side of the family as she normally does, Maddie and her relatives gathered together to prepare the meal, then split the food into portions and ate only with their immediate family members.

“It was a little weird because everyone wore masks while cooking. It was fun but strange not having so many people with us,” Maddie described.

Not gathering with family members was an obstacle most teens faced this Thanksgiving. Although the pandemic cast a shadow over all of our lives in one way or another, Coronado teens persisted and managed to keep some holiday traditions. New traditions were created along with good meals and memories.

If you see a couple of figures, crouched down low on the sidewalk in the early morning hours, don’t call the police -- they...
Read more

‘Tis the Season for Pet Safety

In the midst of the holiday season, it is important for pet owners to keep the health and safety of their animals in mind...
Read more
Crime

The information below is provided weekly from the Coronado Police Department and then summarized for publication. Crimes Reported: Petty Theft on Palm AvenueVictim reported vehicle burglary...
Read more
Sports

The information below is provided weekly from the Coronado Police Department and then summarized for publication. Crimes Reported: Petty Theft on Orange AvenueSuspect shoplifted. Total loss...
Read more
Crime

The information below is provided weekly from the Coronado Police Department and then summarized for publication. Crimes Reported: Battery at Sharp Coronado HospitalPatient involved in a...
Read more
Crime

The information below is provided weekly from the Coronado Police Department and then summarized for publication. Crimes Reported: Vandalism Report on Silver Strand BoulevardBird sanctuary was...
Read more
Advertisement
Advertise Here (Get Rates)