On May 2, 2019, the law firm of Hernquist & Associates, on behalf of Harold DeNardi, filed a lawsuit against the Coronado City Council, Robert Bardin, Edward and Carole McVaney and TPL, LLLP.  The lawsuit alleges bias on the part of Mayor Richard Bailey and that Coronado Council members violated the Brown Act.  The Coronado Times reached out to the City of Coronado for comment on the lawsuit and they responded, “The City has no comment on pending litigation”.

The current issue revolves around a tree on City property that was recommended for removal by the Street Tree Committee.  However, a motion to overturn the recommendation was passed during the February 19th City council meeting by a vote of 3-2.  A 54 minute video of the public hearing (item 8a) can be found here (click on “Public Hearings 8a” on right side of page).

Here is an excerpt from the meeting recap as published in The Coronado Times.

Cliff Maurer, Director of Public Services and Engineering, gave a presentation on the background for this issue. Initially, the homeowner came to the city for a right-of-way permit to install an access driveway between 1st Street and Bay View Estates Frontage Road. The City Engineer outlined the following two conditions to grant the permit:

A subordinate request was to remove a city-owned tree to comply with the first condition, which the Street Tree Committee approved. A neighbor filed an appeal of that decision.  Maurer outlined the reasons to deny an appeal.

Bob Bardon, the appellant, cited that “I hate to see a good tree go down. In the court documents, Mr. DeNardi stated that he would accept another location for access.” He discussed the driveway issue asking that Ed McVaney’s existing driveway be used. Four other residents spoke up in favor of keeping the tree for the aesthetics of the view and said there were other options with regards to the driveway issue.

Johanna Canlas, City Attorney, outlined the rules for this de novo hearing, and stressed that this decision is based only on the tree, not the driveway issue. All the councilmembers shared that they have talked to residents and are familiar with this site. This topic was widely debated among the council, with the mayor stating that the tree belongs to the city and he made the motion to overturn the recommendation. Councilmembers Benzian and Sandke agreed with him and Councilmembers Heinze and Donovan voted against the appeal.

The lawsuit follows an April 5th “demand letter” which alleges that Coronado’s Mayor and each Councilmember violated the Brown Act.  On April 18th, the City of Coronado refuted Brown Act violations.  The initial demand letter and City’s response can be read here.

The Brown Act, originally a 686 word statute that has grown substantially over the years, was enacted in response to mounting public concerns over informal, undisclosed meetings held by local elected officials. City councils, county boards, and other local government bodies were avoiding public scrutiny by holding secret “workshops” and “study sessions.” The Brown Act solely applies to California city and county government agencies, boards, and councils. The Act has been interpreted to apply to email communication as well, leading to restrictions on the number of parties that can be copied on electronic messages. – Source, Wikipedia

The lawsuit is 53 pages in length – click here to view. 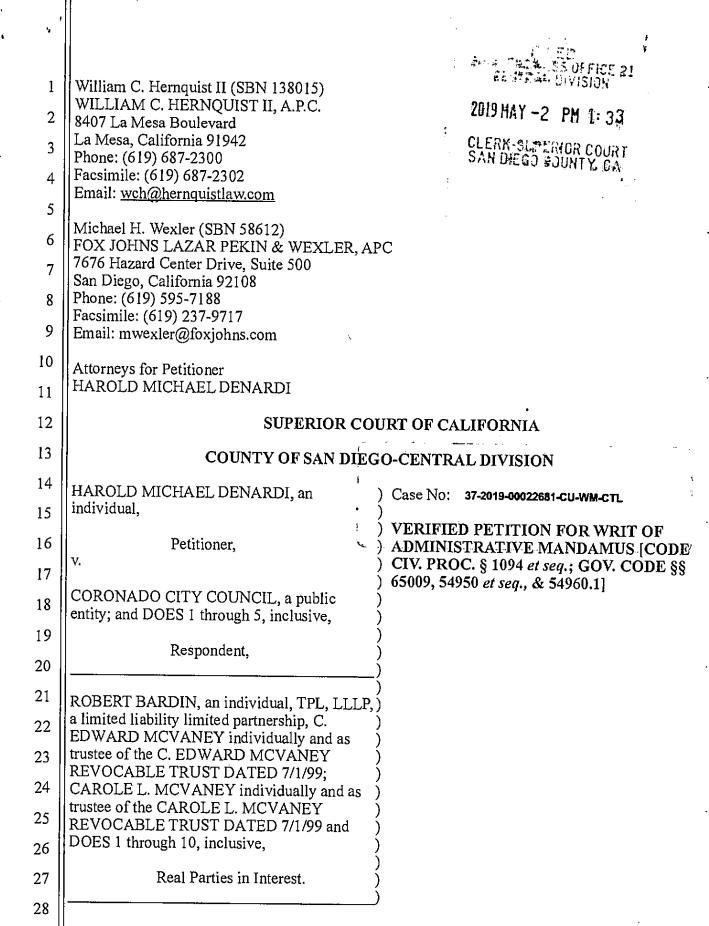