This week’s City Council meeting had a packed agenda with some touching presentations for service and philanthropy, comprehensive reports on the Port of San Diego and legislative advocacy, and some more controversial issues like trees and sewage lawsuits. There were also updates on the mid-year budget, legislative policy guidelines, loan agreement amendments, and candidates for an art commission appointment.

Mayor Bailey presented Duq Duquette with a proclamation proclaiming February 19, 2019, as “Duq Duquette Day” to honor his 20 years of public service as a Pump Mechanic, City Electrician, Engineering Technician II, and the Public Services and Engineering Department’s General Service Supervisor overseeing Street, and Fleet, for the past seven and a half years.

Old Goats and Kids Who Care

The Council unanimously approved a request from the Coronado Old Goats and Kids Who Care to host a recognition reception on November 10, 2019, honoring wounded warriors and to waive the catering fee, security guard requirement for an event serving alcohol, and the fee for use of the Nautilus Room. Councilmember Heinze said that he supports the event but would like to see a process put in place for these types of requests. City Manager Blair King said staff will work to develop a policy for in-kind donations and look at the model the Port uses.

Jack and Grace Elardo spoke about their affiliation as ambassadors with The Old Goats and Kids Who Care, which was founded in 2008 by Ben Hallowell to help transition Wounded Warriors. Jack said, “Through the ambassadorship, led by teachers Nancy Ratcliffe and Casey Tanaka, we have learned about the sacrifices of Wounded Warriors and the importance of helping others.” Grace highlighted that “Each year, The Old Goats and Kids Who Care sponsor or participate in two major events, a weekend retreat over Veteran’s Day for six combat injured and wheelchair basketball game and barbecue in conjunction with Loews Good Neighbor Program.” She also said there are numerous other outreach events to help wounded warriors and thanked the Council for their support.

Oral Communication was mostly regarding the Tijuana sewage lawsuit. Daron Case and Gabriella Torres had just come from The Surfrider Foundation press conference, where they both called on Coronado to join the lawsuit against the federal government. Shannon Johnson and Linda Smith also encouraged the city to join the lawsuit. Carolyn Rogerson voiced her support of Coronado’s current multi-prong diplomatic approach. Dennis Quigley spoke on his opposition to the new Logos College project and would like to see the area remain residential.

Andre Monette, lobbyist, Best, Best & Krieger, presented the state lobbying progress for Coronado on the Tijuana River environmental issues since the firm was retained in December 2017. Having grown up here and having spent hours at the beach, he understands the problem and said, “It’s not just a job, it’s personal.”

He stated that, “There is a benefit to taking an advocacy approach.” He pointed out that there are three branches of government: judicial, executive and legislative, and said “when you pursue litigation, you can only pursue one. We want to ensure that we are touching this problem from all angles. We are aware of what’s going in litigation, but also trying to engage the EPA, IBWC, and the White House to encourage them to take action that would alleviate this problem. It starts with relationships. We worked with Congress, Senator Feinstein’s office, reached out across the border and worked with representatives from Arizona in the House and Senate with Texas and New Mexico. Fundamentally, money will come through Congress.”

He highlighted the recent $25 million designation by Congress as a win, and feels Coronado was a big part of that. And although not all of those monies are coming to Tijuana River Valley, the relationships that Mayor Bailey and Councilmember Benzian have forged with the EPA and White House are important as they decide where the money gets allocated. “It is critical that we be able talk to the EPA in a free and open manner and not be hindered by the Department of Justice. All of these things are a concerted effort to push the ball from all sides. Litigation is also playing an important role in putting pressure on the federal government,” he emphasized. For 2019, they will continue to push to build infrastructure projects on both the U.S. and Mexican side of the border. They will continue pushing the International Boundary and Water Commission (IBWC) to take a more active role.

When Mayor Bailey asked if Monette saw any benefit to Coronado joining the lawsuit, Monette replied, “Litigation is serving a role here and major players in this region are part of it. If Coronado adds its name to the litigation, I don’t know that we get anything out of it. But I will tell you that we will be less able to have open conversations with the executive branch, the EPA, the State Department and the White House.”

Councilmember Benzian reiterated that if Coronado elected to join one of the three lawsuits, and if the lawsuits were thrown out, then it would be a setback. Benzian also asked if they could be involved in legislative efforts and litigation concurrently, and Monette answered, “Yes, but if you are involved in litigation, then the executive branch will be reticent to talk to you. It would limit your ability.”

Councilmember Sandke pointed out that both prongs have the same goal of clean beaches and asked about a White House response, joking “I can’t help but feel that we are one tweet away from some kind of actual real movement on this issue.” Monette said he would love to get that one tweet, and the White House is waiting for the EPA study due out this spring and will then make decisions. Sandke asked what infrastructure projects could be built sooner rather than later. Monette answered that the EPA is looking at a variety of small diversion projects on our side of the border that would move more sewage into the international treatment plant and looking at projects to rebuild pump stations and other infrastructure in Tijuana to prevent spills. He said that grant monies can be used for U.S. projects, but the challenge to build in Mexico is that you need a Mexican contribution. “To get to the heart of this problem you’ve got to rebuild the infrastructure in Mexico,” he concluded.

“I don’t think our residents are aware that we have put $150,000 into this and work daily, weekly, and monthly on solutions for this issue,” said Sandke. The Council voted to continue efforts with Best, Best & Krieger with Mayor Bailey and Councilmember Benzian as designated representatives. 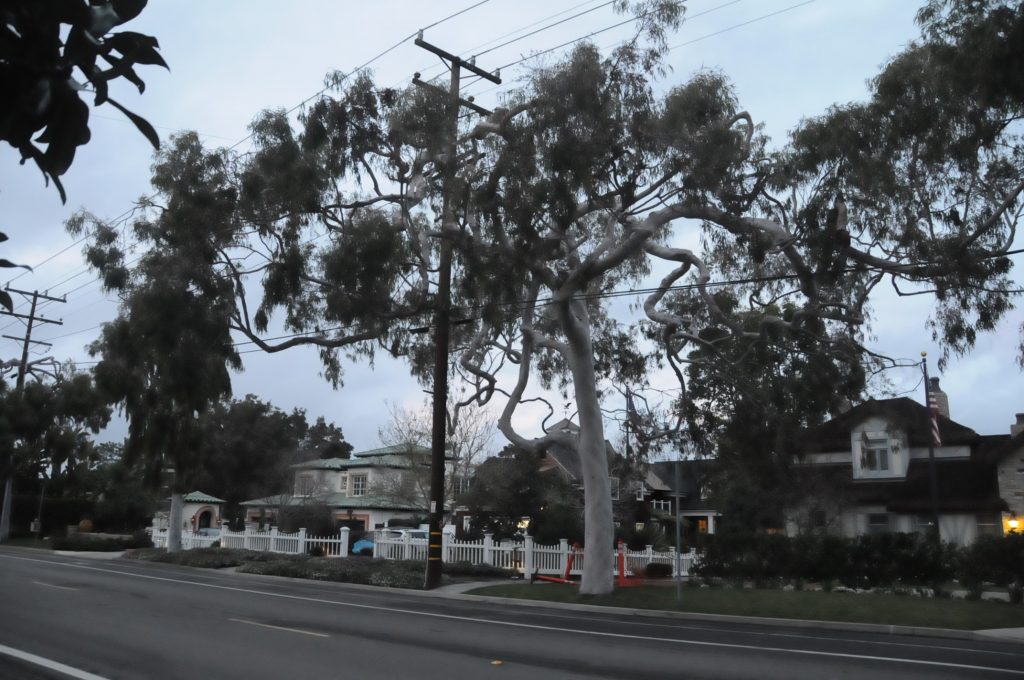 Cliff Maurer, Director of Public Services and Engineering, gave a presentation on the background for this issue. Initially, the homeowner came to the city for a right-of-way permit to install an access driveway between 1st Street and Bay View Estates Frontage Road. The City Engineer outlined the following two conditions to grant the permit:

A subordinate request was to remove a city-owned tree to comply with the first condition, which the Street Tree Committee approved. A neighbor filed an appeal of that decision.  Maurer outlined the reasons to deny an appeal.

Bob Bardon, the appellant, cited that “I hate to see a good tree go down. In the court documents, Mr. DeNardi stated that he would accept another location for access.” He discussed the driveway issue asking that Ed McVaney’s existing driveway be used. Four other residents spoke up in favor of keeping the tree for the aesthetics of the view and said there were other options with regards to the driveway issue.

Johanna Canlas, City Attorney, outlined the rules for this de novo hearing, and stressed that this decision is based only on the tree, not the driveway issue. All the councilmembers shared that they have talked to residents and are familiar with this site. This topic was widely debated among the council, with the mayor stating that the tree belongs to the city and he made the motion to overturn the recommendation. Councilmembers Benzian and Sandke agreed with him and Councilmembers Heinze and Donovan voted against the appeal.

“When I think of the bay, I boil it down to five B’s ~ beaches, bays, beer, beautiful weather and beautiful people,” commented Port Commissioner Garry Bonelli. His theme for 2019 is “Renaissance on the Bay.” Port highlights include:

Other items of interest:

The Mayor thanked the three qualified applicants for applying to be Coronado’s representative to The Port of San Diego Arts, Culture and Design Committee. The three candidates were Mary Hale, Francis Howdyshell, and Pamela Salisbury, and after a vote by the council, Mary Hale was appointed to complete the term expiring on December 31, 2020.

The city retained Capitol Advocacy in April of 2018, to provide lobbying and representation services in Sacramento. Shane LaVigne presented an update on their efforts on Coronado’s behalf. He gave an overview of the climate since Governor Newsom took office. Key topics include housing issues, homelessness, and the recent fire crisis’. The paid family leave has been extended to six months. They have found Assembly member Todd Gloria sympathetic to The Tijuana River Valley issue. His motto is, “Communicate early and often and constant communication.” The Mayor gave direction to look at lowering of the CALPERS rate and to get the government to fully understand the impact of the sewage issue.

With minor changes by Councilmembers Sandke and Heinze, the 2019 Legislative Policy Guidelines were unanimously approved.

When the discussion of the Fiscal Year 2018-19 mid-year budget was discussed, Councilmember Heinze asked about the $80,000 golf course adjustment. City Manager King told him that it was to create a wedding venue, with a flat spot and arbor at the golf course. The budget was unanimously approved.

The City Council voted unanimously to adopt an addendum, including traffic calming and safety measure, to the Active Transportation Plan (ATP).

Jim Krueger, Director of Administrative Services, gave a presentation on amending the existing loan agreement with Feast & Fareway, LLC to fund additional capital improvements at the Coronado Municipal Golf Course. Feast and Fareway is requesting an additional $350,000 loan on top of the original agreement for $350,000 at 3.8 percent.  They are also asking to consolidate the loan with the same repayment terms, which will be paid over 12 years. The first two years will be interest only payments, with 10 years to fully amortize the $700,000 loan. The new interest rate will be 4.4 percent.  The concessionaire cannot get bank funding for this because the golf course building is owned by the city. The council voted unanimously to amend this agreement.