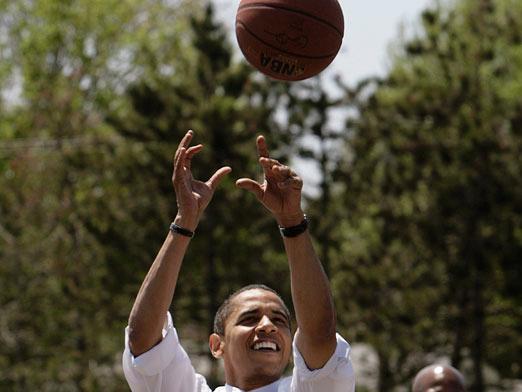 The White House confirmed Thursday that the nation’s basketball-player-in-chief has accepted an invitation to attend the Nov. 11 matchup between North Carolina and Michigan State, the first college hoops game on an active flat top.

The Carl Vinson and its sailors have attracted considerable attention since early May, when the carrier conducted bin Laden’s burial at sea after he was killed by Navy SEALs in a raid ordered by Obama.

“This Veterans Day, President Obama will honor our nation’s veterans by laying a wreath at Arlington National Cemetery and then by traveling to San Diego, California, to attend the Carrier Classic on the deck of the USS Carl Vinson,” the White House said in a statement. “He looks forward to a great game between Michigan State and the University of North Carolina at Chapel Hill.”

Obama is a huge hoops fan. Last November, he needed 12 stitches in his lip after he was inadvertently elbowed during a game of pickup basketball. His brother-in-law, Craig Robinson, is the coach at Oregon State. Obama has filled out an NCAA tournament bracket the last three years for ESPN, which will televise the Carrier Classic.

Mike Whalen, the director of Morale Entertainment Foundation, which is organizing the game, said there will be appropriate security considering the dignitaries who are expected to attend. Besides Obama, top Navy officials and congressional delegations from North Carolina and Michigan have been invited. A postgame concert is scheduled, but organizers haven’t announced the acts.

James Worthy and Magic Johnson will serve as honorary captains for their alma maters.

The game will be played on the flight deck of the carrier, which is surrounded by military bases. The Carl Vinson, which has been in San Francisco for Fleet Week, will be berthed at North Island Naval Air Station. To the south is Naval Amphibious Base Coronado, where SEALs train. Across San Diego Bay is Naval Base San Diego. In case of rain, the game will be moved below to the hangar deck.

Navy officials got the news on the sea service’s 236th birthday.

“We’re honored that President Obama plans to attend the game on the Carl Vinson,” said Rear Admiral Dennis Moynihan, the Navy’s chief spokesman. “The ship is a representative of more than 100 Navy ships that are deployed right now. We see this as a celebration of service for all veterans, and we also see this as a great opportunity to showcase what our Navy does on a daily basis.”

Said Whalen: “We’re excited that President Obama would even consider showing up. We feel like we won the lottery.”

The court will be surrounded by stadium-style seating for about 7,000 fans, with most of the tickets going to active military personnel. Tickets won’t be sold to the public.

Whalen said Obama can sit “wherever he wants.”

Morale Entertainment Foundation, which hopes to help raise the visibility of the Navy with the Carrier Classic, brings notable Americans, such as former astronauts Neil Armstrong, Gene Cernan and Jim Lovell, as well as coaches and race car drivers to visit troops in the Middle East and Afghanistan.

The Carrier Classic is sponsored by Quicken Loans.