Coronado Brewing Company and Pizza Port Brewing Company are two of San Diego’s pioneering breweries, and over the years the two have forged a deep and lasting friendship. “I’ve known Gina, Vince, and the Pizza Port crew since back in the early days of the San Diego beer scene,” says Rick Chapman, Co-founder, Coronado Brewing Company.  “Recently we got to talking and we realized we’ve never brewed together. We laughed and immediately got to work on this collaboration. Both of our brands have a lot of similarities—we’re both laid back, love our coastal lifestyle, and don’t take ourselves too seriously. It seemed like a home run to partner up.”  Gina Marsaglia, Co-Founder, Pizza Port Brewing Co., says,“We are so fortunate to have known Rick and the Coronado crew over the years and when the mere mention of a collaboration opportunity came up we immediately started the creative process. Seeing it come to fruition has been the best way to celebrate the amazing relationship we have built throughout time. Cheers!”

The concept for the two-part collaboration series centered on the theme “beers between piers”—a fun play on words as the two breweries are both peers in the craft industry, and the physical breweries are located to the north and south between beach piers. From there, the concept evolved to have Coronado Brewing releasing the first beer in the series: South of the Pier IPA, and Pizza Port releasing the second installment of the series, North of the Pier IPA. “When we first met with the Pizza Port crew, we immediately knew we wanted to brew two different takes on IPAs. Both of our breweries are known for brewing IPAs, so we thought we’d have fun playing on the idea of North and South with the hop profiles,” says Mark Theisen, Head Brewer, Coronado Brewing Company. 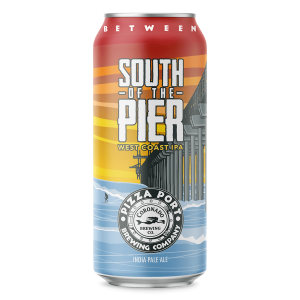 Coronado’s take on the collab, South of the Pier IPA, is a classic west coast IPA brewed with Mosaic, Amarillo and southern hemisphere Waimea and Motueka hops. The beer is dry-hopped with two pounds of hops per barrel for a bright, tropical aroma with lingering sweet orange citrus notes. “What I really love about this IPA is the huge fruit-forward aroma and flavor with a crisp, dry finish,” says Theisen. “We kept the malt bill simple to really let the hops shine and keep in line with that classic west coast profile.” Pizza Port’s take on the west coast IPA will feature northern hemisphere hops to play off the North of the Pier name. “We wanted our version to showcase Pacific Northwest and newer European hops to have a slightly different take on what we brewed with Coronado’s version. It was fun to showcase the difference in northern and southern hop profiles with our two beers,” says Sean Farrell, Director of Brewery Operations, Pizza Port (and former head brewer for Coronado Brewing Company).

The Coronavirus continues to devastate lives and livelihoods all over the world. Many companies and owners have had to react quickly to make the...
Read more
Business

Main Street America is asking small business owners to participate in a survey about the challenges they’re facing as a result of the COVID-19...
Read more
Business

As we settle in for the ultimate staycation, there are a few simple ways we can make our home life that little bit cozier,...
Read more
Business

As a result of the novel coronavirus (COVID-19), the hospitality industry is experiencing an impact to business that will require Hotel del Coronado to...
Read more

Submitted by Anne Boston ParishLemons are simply amazing. Not only do they have a bright and fresh scent, but there are simply so many...
Read more
Business

Main Street America is asking small business owners to participate in a survey about the challenges they’re facing as a result of the COVID-19...
Read more
Education

Letter from CUSD Governing Board

Dear Stakeholders and Constituents,First and most important, the CUSD Governing Board of Trustees hopes that you and your families are well and adjusting to...
Read more
Community News

As of 1:23pm the bridge is open in both directions.At 9:47am Coronado Police Department sent out a Nixle alert that both the eastbound and...
Read more
Letters to the Editor