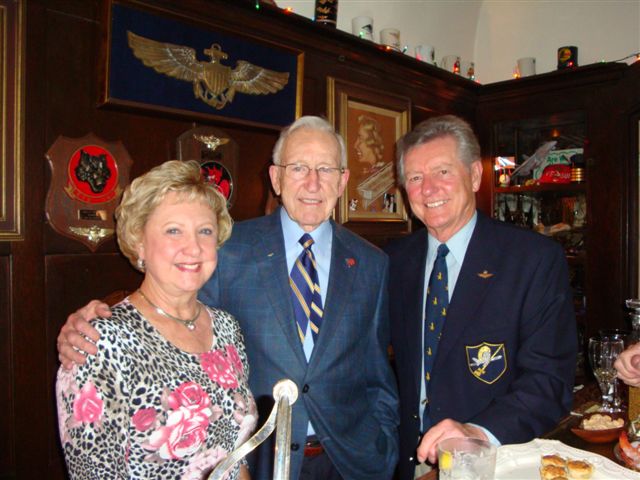 His credentials are something out of a Tom Clancy novel: Naval Academy graduate, combat fighter pilot, and Chief of Naval Operations. How is it that Admiral Thomas B. Hayward, a warrior, would become the recipient of the Golden Rule Society’s (GRS) highest honor: the Distinguished Service Award? Captain Len Kaine, USN (Retired), of Coronado, CA and President of the Golden Rule Society, awarded Admiral Thomas B. Hayward the Golden Rule Society’s Distinguished Service Award, 24 April 2009. Admiral Hayward served his nation as a Naval Officer for over thirty-eight years. Noteworthy assignments included: Navy fighter pilot with 146 combat missions during the Korean War; Commanding Officer of USS America (CV-66); Commander 7th Fleet; Commander in Chief, US Pacific Fleet; and his last assignment as the most senior officer in the NavyChief of Naval Operations. Admiral Hayward retired in 1982 following an extraordinarily accomplished career which earned him the Society of Experimental Test Pilot’s, James H. Doolittle Award; the Distinguished Flying Cross; ten Air Medals; three Commendation Medals with Combat “V”; and the Legion of Merit. It may seem unusual that a man who has dedicated his life to the defense and security of our nation, a tested combat warrior, would also be the recipient of an award from the Golden Rule Society, a non-profit organization dedicated to helping children throughout the world. Thirty-seven years ago, Len Kaine, a retired Navy fighter pilot and airline pilot, fulfilled a life-time dreamthat of bettering the lives of children. He gathered several like-minded advisors together and launched the Golden Rule Society (GRS). The philosophy and mantra of the Golden Rule Society is a simple one,” To better the lives of others is your life’s greatest reward”. “The original mission of GRS was to improve the lives and career opportunities of our nation’s young adults focusing on the children of our military service members and our first respondersfirefighters and law enforcement personnel. Recently, GRS has expanded its mission and its base to include children and young adults worldwide . Progress in helping children, churches, and charities began to gain ground as more people learned of the work and dedication of the GRS team and joined in the effort. Kaine is quite proud to announce, “Children everywhere are now joining what’s called the GRS Success Teamthe fastest growing and soon to be largest team of winners in the world!” What brought Admiral Hayward to the attention (and admiration) of the Golden Rule Society was not, by itself, his military accomplishments, however exceptional. It was also the achievements following the Admiral’s careerhis unsinkable devotion to educate our nation’s young adults, which inspired him to take on the mantel of co-founder and vice chairman of “Voyager Expanded Learning”, an educational services company helping children throughout the USA. As quoted from the DSA inscription, “You have always done the right thing by bettering the lives of others. You have been a model for those who look to you for advice, guidance, and counsel. Your efforts have made a positive impact and a beneficial difference in their lives.” The award ceremony was a festive one and took place at the headquarters of the GRS. As non-paid volunteers, Kaine and his wife of 50 years, Anne are the leaders of the charity’s efforts. It was a heartwarming and uplifting event with plenty of opportunity for two old Navy fighter pilots to trade war stories of days long passed and discuss days in the future in which their similar aspirations to help children worldwide might flourish. See mission statement at http://www.goldenrulesociety.org/ Contact: Nori Watts Phone: (619) 437-4422 E-mail: grsmail@grsmail.com