On Wednesday, January 11th, the Islander girls took on Christian High School. They battled back and forth, with most of the action taking place in the first half, and the Islanders came out victorious 2-0.

Before the game started, Head Coach Mike Costaglio mentioned a few things that he was expecting to see in that night’s game. He said that he wants “more possession in the mid-field, and especially in the attacking third, so that we’re more organized and are connecting balls more often rather than just being single minded and go straight to goal.”

The girls seemed to do just that, and were able to move the ball around beautifully and work very well as a team.

In the first half, both of the only two goals were scored. The first one from Maren Hawley. Maren broke away from her defender and used her speed on the sideline to catch up to a wonderful pass that dropped at the perfect time straight in front of her. As the ball bounced up, she volleyed it straight past the goalie and into the net. This first goal was celebrated, then it was back to business with a 1-0 score.

The next goal would be thanks to precise ball movement and ability to find an open person. That open person was Katelyn McGrath. She received a pass from her teammate, then used her footwork and speed to slice through defenders, leaving them in the dust. She created space, saw the goal, and took a shot. That ball sped right by the goalie and made the score 2-0.

The middle of the field was like a magnet during the second half. Most of the passes and steals occurred in that neutral area. However, the few times that the Christian Patriots got past the brick wall of the Islander defense, there was no need to worry. Goalie Olivia Schoettke was unstoppable. Or better said, specialized in stopping. She didn’t allow anything past her all night.

The game would conclude with the Islanders winning 2-0. The ability to work well as a team and have good chemistry really paid off. The Islander girls are currently 4-2-3 on the season, and 1-0 in league play. 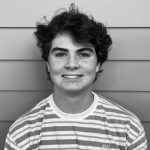