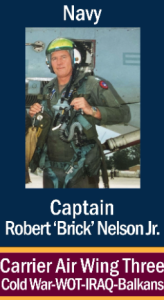 Nelson defines the quintessential fighter pilot. He is a gifted thinker, communicator, planner, tactician, leader and warfighting aviator. His extensive tours of duty, experiences and list of exceptional talents, however, fall short of describing him.

Retiring in 2005, Nelson returned to Southern California as the director of Northrop Grumman’s Aerospace Systems Business Development and Strategy and CEO of Tier One Defense and National Security. He additionally spent time as a board member for the San Diego Navy League, Fleet Week San Diego, San Diego Military Advisory Council, Tailhook
Association and Tailhook Educational Foundation. At the 2022 Tailhook convention, “Brick” received an emotional 10-minute standing ovation as he was given the Tailhook Lifetime Achievement award. Nelson has three children, Robert Nelson III, Ian Scott Nelson, Caitlin (Nelson) Probert, and grandson Robert Nelson IV. He and his wife reside in Coronado.

Nelson was an unrivaled flight lead and patient wingman. He remains a loyal shipmate, astute mentor, fearless warrior and compassionate problem-solver. Mostly, he is an unwavering friend and a devoted sibling, father and husband. Everyone who knows him respects and loves him. “Brick” is our brother and hero.