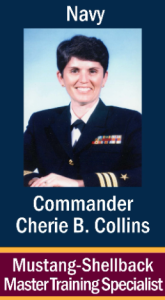 She was a Mustang, a Shellback and a master training specialist. She wanted to go to the Naval Academy, but in the early 1970s that was not an option for women. So, Cherie Bowlin Collins enlisted in the Women Accepted for Volunteer Emergency Service, or WAVES, military unit as a seaman recruit, to do her four years and earn the GI Bill to go to college. Thirty years later, she retired as a commander.

During her enlisted active duty, Collins served as a budget clerk, plane captain, and qualified hurricane evacuation storekeeper, flying in the back seat of the T-2 aircraft, at a primary pilot training squadron in Meridian, Mississippi. She also attended junior college in the evenings and discovered a love for computers. She stayed in the Naval Reserves and served in positions in administration, management and logistics support.

After marrying her husband Jim, a fighter pilot in the Marine Corps, they moved to Hawaii, where she completed a bachelor’s degree in computer science. She accepted a direct commission into the Office of Naval Intelligence following 11 years of enlisted service. The couple’s military service spanned tours in Hawaii, Texas, Virginia, Germany and San Diego. Each move brought her a new Naval Intelligence Reserve unit assignment as well as a parallel civilian career as an intelligence analyst, systems analyst, database manager, program manager or military intelligence computer systems instructor.

Some of the highlights of her military career included becoming a Shellback while crossing the equator onboard the USS Blue Ridge (LCC-19); designation as an Honorary Tailhooker on the USS Eisenhower (CVN-69); and earning her master training specialist certification to instruct the use of a specially configured intelligence workstation while deployed to Alaska with the Army Arctic Warriors. Her final military assignment was as executive officer for a
Joint Intelligence Pacific Reserve unit in San Diego, where she took care of her sailors, the most important job in the military.

Collins and her husband moved permanently to Coronado, California, in 2013 and continue to stay active in the military and civilian communities. Their son Matt is an environmental lawyer for Florida Fish and Wildlife Conservation Commission and a Naval Reserve Seabee. Hoorah!