Come out and watch the Homecoming Parade down Orange Avenue (from Adella Ave to 7th Street) which begins at 4:15pm. See the creative class floats, NJROTC, band, CHS football team, and the homecoming court. Be sure and wear “Islander Green” to be part of the green-out – one town, one team!

At 7pm the Islander football team will take on Crawford High School at Niedermeyer Field, with a halftime ceremony to crown the King and Queen and announce class float winners. 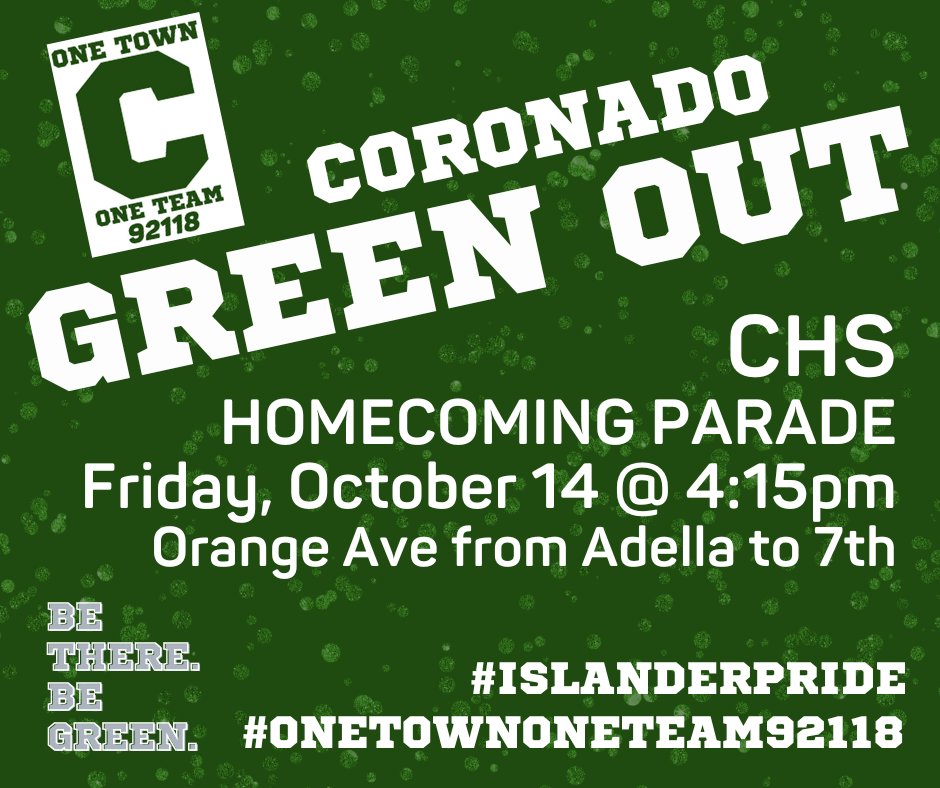 Macarena Borbon: Macarena Borbon is being escorted by her mother Gabriela and her father Rafael Borbon. Macarena has been a part of the Coronado community since the 6th grade and has loved every minute of it. This year she is more than happy to serve as the senior class vice president, as the student representative for the Coronado Schools Foundation board, and as one of the football managers. She enjoys making friendships on and off the field and is excited to see them last and strengthen throughout the year. She plans to continue her education in college and go into event planning or public relations. Macarena would like to thank her parents and siblings Paloma and Rafael for always supporting her and her dreams, and her friends for being there for her.

Gigi Dugas: Gigi Dugas is being escorted by her father, Christophe. She is the president of the civic engagement club, and is working on her own engagement project about overfishing. She loves the ocean and will never turn down wakeboarding or scuba diving. She is also involved with the arts, and hopes to go to USC to study film next year. She appreciates the difference of cultures from growing up in a French/American household and wants to learn her fourth language, Spanish, before leaving for college.

Jesse Hill: Jesse Hill is being escorted by her mother and father, Laura and Robert Hill. Jesse has attended Coronado schools since kindergarten and is grateful to be a part of such an amazing community. She is proud to serve as the senior class president and has been the president of the Emerald Keepers club since her freshman year. She finds joy in spending time with her friends and family, going on hikes, and asking to pet any dog she sees. She looks forward to attending college in her home state to study health sciences. Jesse would like to thank her grandparents and parents for their endless love and support and her older sister and CHS alum, DaniRose, for being her best friend.

Isabella Morton: Isabella Morton is being escorted by her mother Amy Morton. Isabella has attended Coronado schools since kindergarten and is incredibly grateful to grow up here. This year she is excited to be ASB dance commissioner and be one of the managers for the football team and enjoys supporting the team during practices and games. In her free time she enjoys adventuring outdoors, reading, and baking. She is excited to graduate this year and attend college to pursue her dreams of becoming a doctor. Isabella would like to thank all of her friends and family for supporting her in everything she does and never doubting her.

Audrey Slaughter: Audrey Slaughter was born in Arizona but has called Coronado home since second grade. She feels lucky to have grown up in this amazing community. She has been involved in ASB all four years of high school and is so grateful for the opportunities it has given her. She is also president of the Best Buddies and Travis Manion Foundation club. Both organizations hold a special place in her heart. She would like to thank all of her teachers at CHS and beyond for preparing her for the years ahead. Audrey plans to attend college in California to study history and film. She would like to thank her mom, dad and sisters for their endless love and support.

Emma Slaughter: Emma Slaughter is a military child so she has lived in both Virginia Beach and Coronado. She is proud to call both places home. Emma is the founder and president of the Fashion Club and is a varsity discus thrower on the CHS track team. She is also the Commissioner of Publicity in ASB, with a goal of helping people feel represented and heard. Emma plans to study communications, specifically broadcast journalism in college. She would like to thank Ms. Belong for helping her find her love for broadcast journalism through the announcements and ASB Instagram. She would also like to thank her amazing parents, friends, and teachers that she has met at CHS, who have helped her feel supported and loved.

Cooper Cline: Cooper Cline is going to Central Washington University to study primate behavior; he is also known for his love of monkeys. Cooper can be described as the best bench warmer of all time and is still waiting for the duel Mr. Chao owes him. He is not in any clubs because he claims it makes him a “beast” and he is described by a few of his teammates as THE man of all time… whatever that means.

Jared Frances: Jared Frances is being escorted by his father, Bob Frances. Jared has lived in Coronado all his life, attending Village Elementary, CMS, and CHS. He has enjoyed his time as Executive Commissioner of the Student Store during his first year in ASB. He enjoys spending his time as a member of the Fashion Club, Creative Writing club, and as a sailing coach. In college, he hopes to study, and eventually pursue a career in, the fields of physics and computer sciences. Jared would like to thank his friends for listening to his frequent unprompted fun facts and his twin and family for their love and support.

Darren Hopkins: Darren Hopkins is being escorted by his mother, Denise , and father, Dan. Darren is a military child who has lived in four states and two countries. He is grateful for all the people he’s met along the way. He is proud to serve as a varsity captain of the basketball team, a member of ASB for two years, and knowing every lyric of Kanye West’s 138 songs. Darren finds joy in spending time with his dog, Samson, golfing and managing his fantasy football team. He’d like to thank his mom for teaching him how to love, his dad for always supporting everything he does, and his boys for always giving him a good time.

Luke Johnson: Luke Johnson is Coronado local and has been in the CUSD system since kindergarten. Serving as our current ASB president, he has enjoyed being in ASB his high school career. He is also honored being the captain of the surf team and a Younglife leader. All these positions keep him very busy but he still finds time to surf as much as possible. Luke is very grateful for the option of first period off and takes advantage of the extra surf and homework time. He hopes to pursue a surf career and doesn’t like thinking too much about college. He wants to shoutout the YEAHBOYS TV crew, his parents, and grandma for all the constant support. Luke looks forward to what the future will bring.

Stephen Smith: Stephen Smith is being escorted by his mother Lea Adessa and his father Doug Smith. Stephen loves to acrylic paint, play with fashion, dance, and express gender through his makeup artistry. Following high school Stephen is moving to L.A. to attend Art School with focus on Fashion and editorial makeup. Not only is Stephen beautiful, amazing, and talented, but he’s also a third generation Coronado graduate and proud Islander too. He wants to give a special thanks to his friends, parents, and wonderful sisters for their help through his high school years.

Saxton Sylvester: Saxton Sylvester, being escorted by his parents Maureen and Todd Sylvester, has attended Coronado Schools since kindergarten and is a member of the military family community here on the island. Saxton is a captain of the football team, while also playing rugby and track in the offseason. He enjoys weightlifting, being with friends, and traveling with family In his free time. In the future, Saxton wants to follow in the footsteps of his mother and join the armed forces. Saxton wants to thank his two sisters, grandma, and parents for their continuous unwavering support.