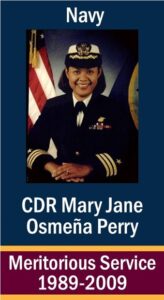 Mary Jane “MJ” Osmeña Perry was born into a Navy family on Sept. 30, 1967, in Great Lakes, Illinois. She grew up in Portsmouth, Rhode Island, and was always too humble to talk about the beauty pageants she won. She graduated from College of the Holy Cross Naval ROTC Unit in 1989, then began her career in the U.S. Navy.

Perry served her country for 20 years as a Naval Officer, first hunting Soviet submarines and later providing invaluable human resource support to thousands of navy service members and their families while stationed in Okinawa, Hawaii, California, and Washington D.C. It was in the navy she met and married her husband, Capt. Ryan Perry. In 2015, they made Coronado their home and the family still lives here.

After her retirement, Perry continued to be an exceptional leader and mentor in Coronado. She was a golf enthusiast, community caretaker, and all-around unstoppable woman. Perry spent her time mentoring fellow female naval officers between tee times at Naval Base Coronado’s Sea ‘N Air Golf Club, and she never missed an Islander football, basketball, or baseball game.

Perry passed away on April 6, 2021, at the age of 53. She is survived by her children L.T. Blake McCrea, Raden Perry, and Malia Perry; her parents Divino and Leticia Osmeña of Portsmouth: sister Divina Bradshaw of Naples, Florida; and many other family members and friends at home and abroad. Her widower, Capt. Perry, is an active-duty Navy Captain and is stationed here at Naval Special Warfare.

At her funeral, several aisles were filled with Coronado High School Islander baseball players, who wore their jerseys to honor her and pay their respects. Members of both the local, and naval communities, remembered “MJ” as devoted, protective and altruistic.

Perry’s daughter is a freshman at Coronado High School. Her oldest son is a helicopter pilot at Naval Air Station North Island. Her second son played several varsity sports at CHS during his four years. Her husband is stationed at Naval Special Warfare Command. He is honored that “MJ” will smile down on the sailors and officers as they drive to NASNI every day, and that the banner will serve as a reminder of her service.