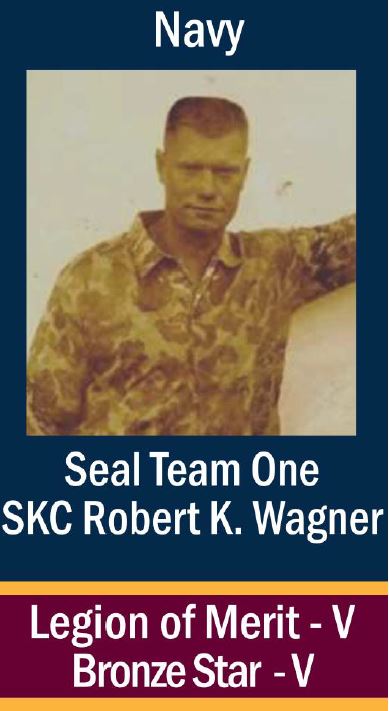 An original member of SEAL Team One, Bob Wagner was born in Kalamazoo, Michigan, in 1933. He enlisted in the Navy in 1950 as a boatswain’s mate. After attending boot camp, he was sent to USS Monterey in Norfolk, Virginia. The ship moved to Pensacola, Florida, where Wagner met his future wife, Helen. While in Pensacola, he was transferred temporarily to the Navy boxing team. At 6-foot, 3-inches and 220 pounds, Wagner was the Alabama State Golden Gloves heavyweight boxing champion.

In 1954, he was honorably discharged and moved to Barstow, California, where he worked at the Marine Corps Supply Depot. In 1959, he reenlisted as a Storekeeper and was sent to Okinawa for 18 months. Wagner volunteered for Underwater Demolition Team training in Coronado. He graduated with UDT Class 28 in 1962. SEAL Team One was being formed at that time and Wagner went straight to SEAL Team One, the only one to do so during the initial years. He attended many training schools, including jungle warfare in Panama where he was selected as the top student.

Wagner deployed to Vietnam seven times from 1963 to 1968. In 1966, he was given an assignment to assist the CIA in improving its counterterrorism program. Wagner was largely responsible for establishing the program. He drew up plans for a training camp, supervised its construction, compiled lesson plans, and set up the curriculum. This program led to the formation of the Provincial Reconnaissance Units, later described as one of the most effective programs ever devised in unconventional warfare. Upon his return to San Diego in 1967, he set up a special operations training program designed to train SEAL personnel in unconventional warfare techniques.

On August 15, 1968, Wagner was killed in action in Vietnam while leading a Provincial Reconnaissance Unit in a raid on a Viet Cong-held village. He was posthumously promoted to Chief Petty Officer, received the Legion of Merit, which is rarely awarded to an enlisted person, and the Bronze Star, both with the Combat “V” for Valor. He is buried at Fort Rosecrans National Cemetery in San Diego.