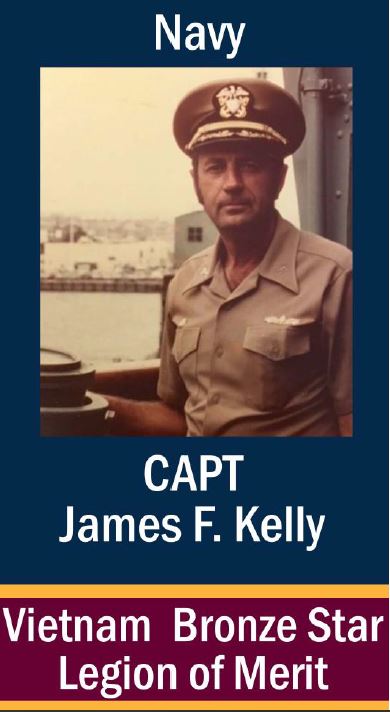 Born in 1930 in New Haven, Connecticut, James F. “Jim” Kelly led a storied naval career, combining years of sea duty, many of which were in command and combat, with studies at the nation’s finest post-graduate institutions and key shore billets, including duty on the staffs of CINCPACFLT and CNO. He was and remains a master mariner, combat veteran, brilliant leader and noted author.

Following graduation from Southern Connecticut University and Officer Candidate School, Kelly was commissioned Ensign in 1953 and served in Atlantic Fleet carriers and destroyers before reporting as Executive Officer aboard USS Westchester County.

Among CAPT Kelly’s highest military decorations are the Legion of Merit (two awards) and Bronze Star with Combat V. Retiring from active duty in 1983, Kelly earned a doctorate in education at University of San Diego; was a senior vice president at Great American Bank; and taught ship handling, seamanship, and navigation at Naval Base San Diego.