Written by The Kelleher Family 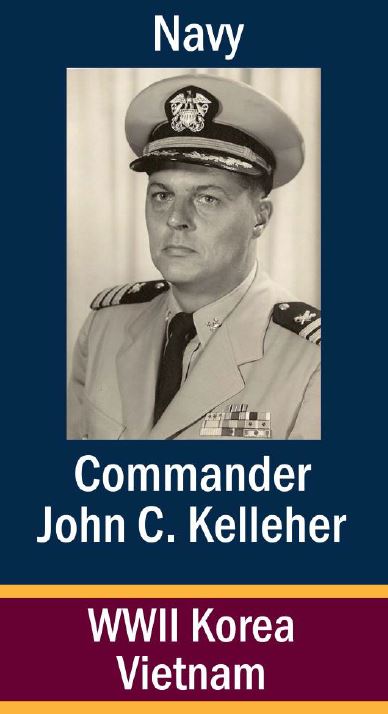 Born near the harbor in New York City, whenever it was announced “The Fleet’s In!” he would hurry to the water, knowing he wanted to be in the Navy.

He enlisted in 1942 and trained in Florida, Newport, Rhode Island and New York. In 1944, he attended the U.S. Naval Reserve Midshipmen’s School at Columbia University, reported to duty in Virginia, and then deployed to the South Pacific. During World War II, he served on two ships, USS Manatee and USS George Clymer. Both were in action in the Philippines, including the invasion of Leyte. Coming under direct attack by the Japanese, Kelleher and his crew shot down a Kamikaze. He also survived typhoon Cobra that sank three destroyers, killed 790 sailors, and damaged nine other warships.

Returning home in 1946, Kelleher married fellow New Yorker Patricia Byrne and made the Navy his career. Being a business major from Manhattan College, he was accepted into the Naval Supply Corps. After four years in the New York area, he was called back to sea for the Korean Conflict.

After a year at sea, Kelleher transferred to the submarine base in New London, Connecticut, followed by two years in London and two tours in Pennsylvania. He then transferred to California, where he made Coronado his permanent home for 50 years. He worked at Naval Air Station North Island on USS Klondike, the Naval Amphibious Base, and in Alameda, California. He had one long deployment during Vietnam, as well as shorter cruises during his last years with the Navy. He retired as commander in 1970.

Active in the Coronado community, Kelleher was president of Kiwanis, and coached both Little League and Pony League baseball, instilling a love of that great game in his children, grandchildren, and many others.

A devout Catholic, Kelleher served as usher, reader and Lay Eucharistic Minister at both Sacred Heart Church and NASNI Chapel.

Kelleher was a devoted and loving husband to Pat for 65 years and a beloved father to his five children.