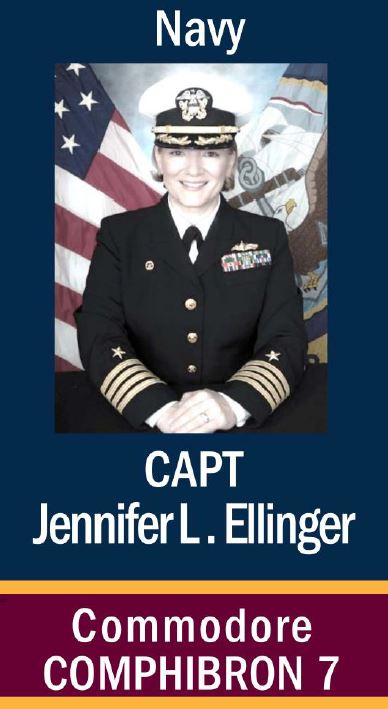 CAPT Jen Ellinger graduated from the U.S. Naval Academy in 1993 and reported to USS Shasta in Alameda, California, where she served from 1994 to 1997. She then moved to San Diego to serve aboard USS Benfold from 1997 to 1998.

From 2002 to 2003, she served as Operations Officer aboard USS Decatur, deploying in support of Operations Enduring Freedom and Iraqi Freedom. She served as executive officer of USS Barry in Norfolk, Virginia, from 2006 to 2008. She returned to San Diego and reported to USS Kidd as executive officer in 2010 and fleeted-up to commanding officer from 2011 to 2013. While in command, Kidd deployed and executed several Theater Security Cooperation missions, and served as the flagship for CTF 151 in support of Counter-Piracy operations off the Horn of Africa. Kidd’s deployment was highlighted by the rescue of 13 Iranian fishermen and capture of 15 Somali pirates. Under Ellinger’s command, Kidd earned three consecutive Battle ‘Es’ and Retention Excellence Awards.

For the past two years, CAPT Ellinger has been leading sailors and marines as commodore, Amphibious Squadron Seven.

CAPT Ellinger’s personal decorations include the Legion of Merit, Meritorious Service Medal, and various campaign medals. She is the recipient of the Arleigh Burke Leadership Award, Knachel Leadership Award, Commander Naval Surfaces Forces Pacific 2004 Tactician of the Year Award, and the 2012 Freedom Alliance ‘Service to America’ Award. She is graduate of both the Naval War College and Joint Forces Staff College. As a long-time resident of Coronado, she and her active-duty Marine husband, Chris Ellinger, are raising their two children in the city.