Cabaret singers, crime, and the Windy City. Two Chicago murderesses are trying to fend off execution while incarcerated at the Cook County jail. Tap dance back to the Roaring ’20s and all that jazz with the CoSA production of Broadway’s longest-running American musical: Chicago. 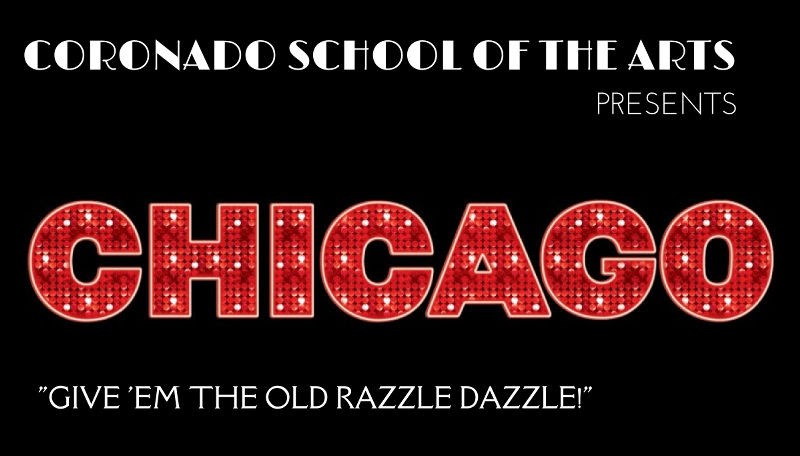 Chicago, the second longest-running show in Broadway history, is a black satire about merry murderesses that argues “in this town murder is a form of entertainment.” Winner of six Tony Awards, it is based on a 1926 play of the same title by reporter Maurine Dallas Watkins, about actual criminals and the crimes on which she reported. This timeless story of crime, greed and corruption opens October 22 at 7pm and features the talented musical theatre and drama students of the Coronado School of the Arts.

Set in the legendary city during the roaring “jazz hot” ’20s, Chicago tells the story of two rival vaudevillian murderesses locked up in Cook County Jail. Nightclub star Velma (Kendall Becerra) is serving time for killing her husband and sister while wannabe starlet Roxie (Mia Perez) has been tossed in the joint for bumping off her lover. Not one to rest on her laurels, Velma enlists the help of prison matron Mama Morton (Sydney Zuckerman) and smooth-talking lawyer Billy Flynn (Gavin Miller), who turn Velma’s incarceration into a murder-of-the-week media frenzy, thus preparing the world for a splashy showbiz comeback. But Roxie has some of her own tricks up her sleeve.

“The show is harsh, cynical and funny and resonates well with an age that understands the concept of the celebrity criminal,” according to Barbara Wolf, Chair of CoSA’s award-winning Musical Theatre & Drama conservatory. “Even if you’re seeing Chicago for the umpteenth time, it’s utterly irresistible.”

The 570-seat Coronado Performing Arts Center Main Stage Theatre located at 650 D Avenue is the venue for this sophisticated comedy with performances October 22 (7pm), October 23 (7pm), October 24 (2pm), October 29 (7pm) and October 30 (7pm). Tickets are available at the box office 45 minutes prior to performance or online at www.cosafoundation.org/events/chicago and range from $10-$20.

New this year to CoSA is MaeAnn Ross, the Conservatory Chair for Theatre Production & Design. A San Diego based Sound and Projections Designer, Ross was born and raised in Texas and holds a BFA in Technical Production from Texas State University and a MFA in Sound Design from UC San Diego. In addition to being a part of CoSA, she is also currently the Post MFA Teaching Fellow in Design at Pomona College.