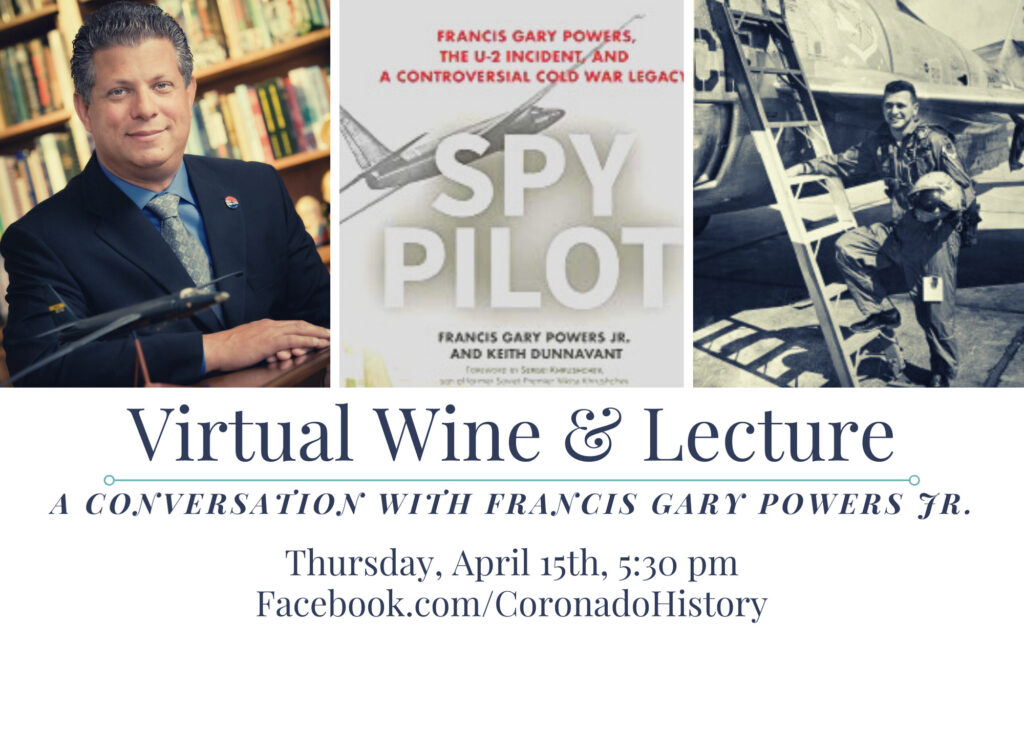 Pre-register HERE, and you can also purchase a signed copy of the book HERE!

CHA’s Virtual Wine & Lecture is not to be missed on April 15th when Air Force Brigadier General R.G. Head (ret.) interviews author Francis Gary Powers Jr. about his two books that talk about his father, CIA U-2 pilot Francis Gary Powers. I had an opportunity to interview the author by phone recently as I wanted to know more about him and what prompted him to write these stories after all this time had passed.

The U-2 incident took place in Russia in 1960. Gary Jr. was born in 1965 after his father’s release and return to the U.S. He grew up in the San Fernando Valley area of Los Angeles, where his father was killed in a chopper crash in 1977 while flying as a reporter for an L.A. television station. After attending school, young Gary went on to college at Cal State Los Angeles taking several years to obtain his degree while doing construction in between to raise money for tuition. After much hard work and dedication, he was able to obtain those much wanted advanced degrees. He held a series of jobs until his grandmother died in Virginia, which prompted his move east to be closer to family. He continues to live in Richmond, VA with his wife and son.

When asked about his writing, he said that he obtained a master’s degree in U.S History in ’92 and has actually been writing articles for 30 years now. He gathered over 70 letters from his father’s time in prison from different family members and wanted to preserve them. He had done this over several years and finally decided to publish this work as Letters from a Soviet Prison in 2017. This was followed by Spy Pilot published in 2019. Gary tours the country now giving lectures on the Cold war, which he states is now a forgotten war. In 1996 he founded the Cold War Museum. Affiliated with the Smithsonian Institute, it started as a traveling exhibit until it obtained a home in 2011 on a former Army communications base outside Washington, D.C. Because of the COVID pandemic, he was forced to cancel over 60 speaking engagements scheduled for 2020. Coronado was one of the canceled events, but we are honored to host him virtually and we look forward to this interesting conversation.

While you are enjoying the lecture, eat local and order takeout from Costa Azul. The featured special is the swordfish tacos! Simply mention CHA to receive 20% off your order on the evening of April 15. Click here to see Costa Azul’s Menu and Order. Or call them at (619) 435-3525 to place your to-go order!