With its combination of shops and restaurants, the Coronado Ferry Landing was one of the places in town that didn’t entirely shut down during the COVID-19 crisis. “We never fully closed the center, but only a handful of places were open with limited operations,” says Property Manager Christian Herrera. Of the 12 eateries – Coronado Coffee Company, Village Pizzeria, Lil’ Piggy’s, Spiro’s Greek Café, Costa Azul, Coronado Coffee Company, Peohe’s, Il Fornaio, Cold Stone Creamery, Coronado Cupcakery, Crown Town Deli, Raspado King, and Burger King – most offered take-out food and delivery options during the shutdown. All are now open to welcome patrons back with state and county precautions and additional outdoor dining.

Several business owners were complimentary on how the landlord handled the crisis. “We forgave April rent for all our tenants and then deferred the next two rent payments to help our businesses continue,” points out Herrera. Port Commissioner Garry Bonelli said that payment for those rents will be delayed until October 2021, to give the businesses time to get back on their feet. This has definitely been a challenging time for the Ferry Landing, and Herrera, a CHS graduate, points out that they are working to follow all state and government guidelines. Hand sanitizing stations and signage have been added, masks are encouraged for everyone, and additional cleaning crews frequently sanitize the tables, chairs, restrooms, and couches. “We are taking this matter very seriously and are also working with MainStreet on ways to help customers stay safe and maintain social distancing,” he comments. 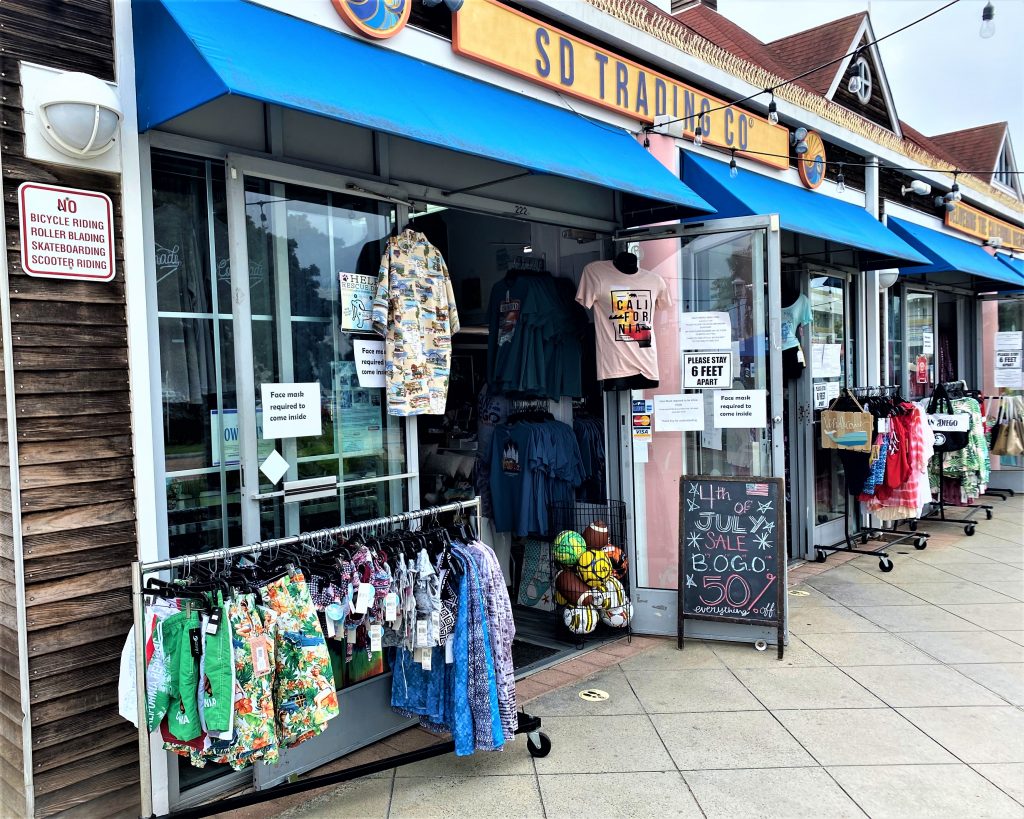 Bustling once again, The Ferry Landing has resumed its weekend concerts on Saturdays and Sundays from 2 to 5 pm, which run through Labor Day, and on Sundays all year. The concert schedule is available on their website www.coronadoferrylanding.com. Special events will be limited, but they are in the process of working with Beer by the Bay organizers and Coronado Flower Lady Shanel Albert to see about the feasibility of hosting the Pumpkin Patch and Christmas Tree Farm later this year. The weekly Farmers’ Market never missed a Tuesday during the crisis, and was a great resource for residents to access fresh fruits, honey, microgreens, eggs, flowers, vegetables, and cheese. The popular event is held Tuesdays from 2:30 to 6 pm at the compass in the middle of the center.

The ferry service to the Broadway Pier and the Convention Center had limited schedules during the stay-at-home orders but have now resumed their full schedules. “We are surprised at how quickly the center is coming back, with people enjoying the beach and grassy areas and boating. Sales are up, but not as good as last year,” says Herrera.

Port Commissioner Bonelli says he is hopeful for the future of the Ferry Landing with the combination of the location and the tenants contributing to its success. He highlighted the difference in gross sales for the center from last year: 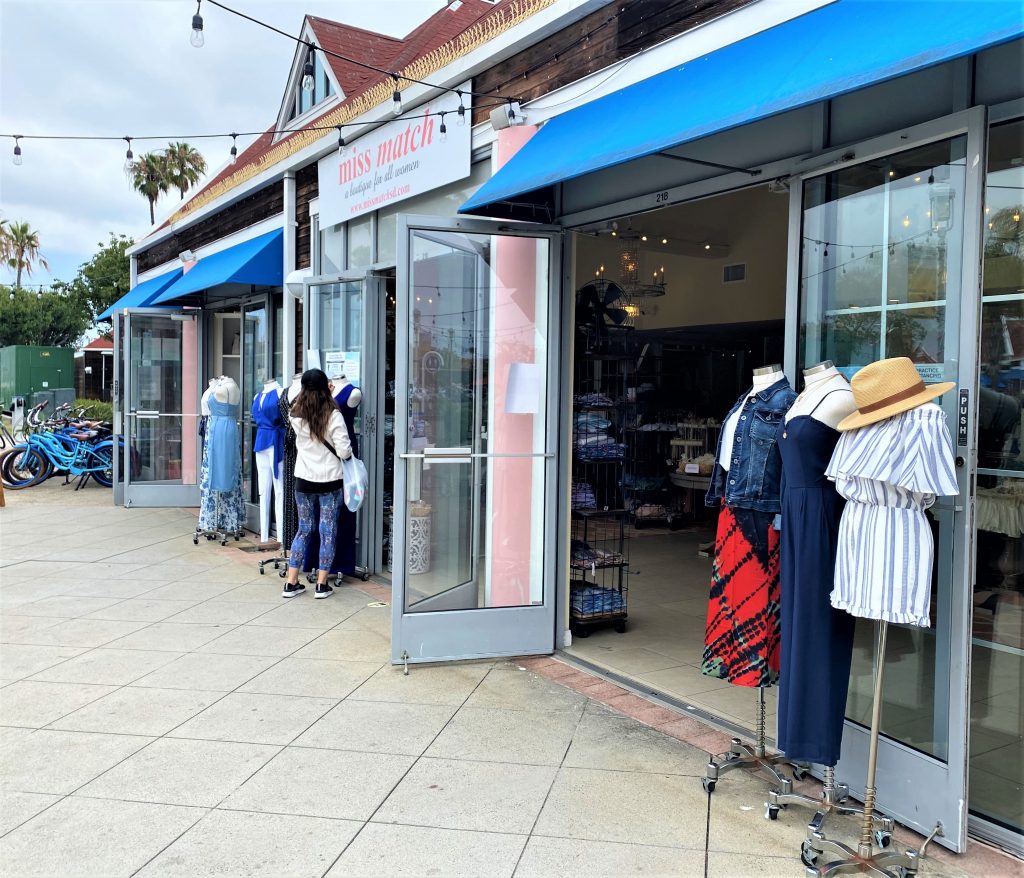 Visitors will see changes as they return to the Ferry Landing, like the consolidation of The French Room and Lisa’s boutique with the same owner. Another women’s clothing store is Miss Match, which only had online sales during the shutdown, but is now back open and fully stocked with the latest fashions. In the former French Room location is the newly opened Vitaltea, which is a health and wellness boutique, featuring a skin care line with plant-based stem cells, lifestyle care products and treatments, organic honey, essential oils, candles, and more. Part of a world-wide franchise group, they are planning to offer a discount for Coronado residents.

Renting bikes and kayaks is popular once again at Bike and Kayak Tours and Holland’s Bikes and Beyond, and beach-themed merchandise and gifts are on full display at SD Trading Co., La Camisa T-shirts, and Casa de Surf. The House of Soles & Shades, which had a closing sign on the door has reopened and will remain until the end of their lease. 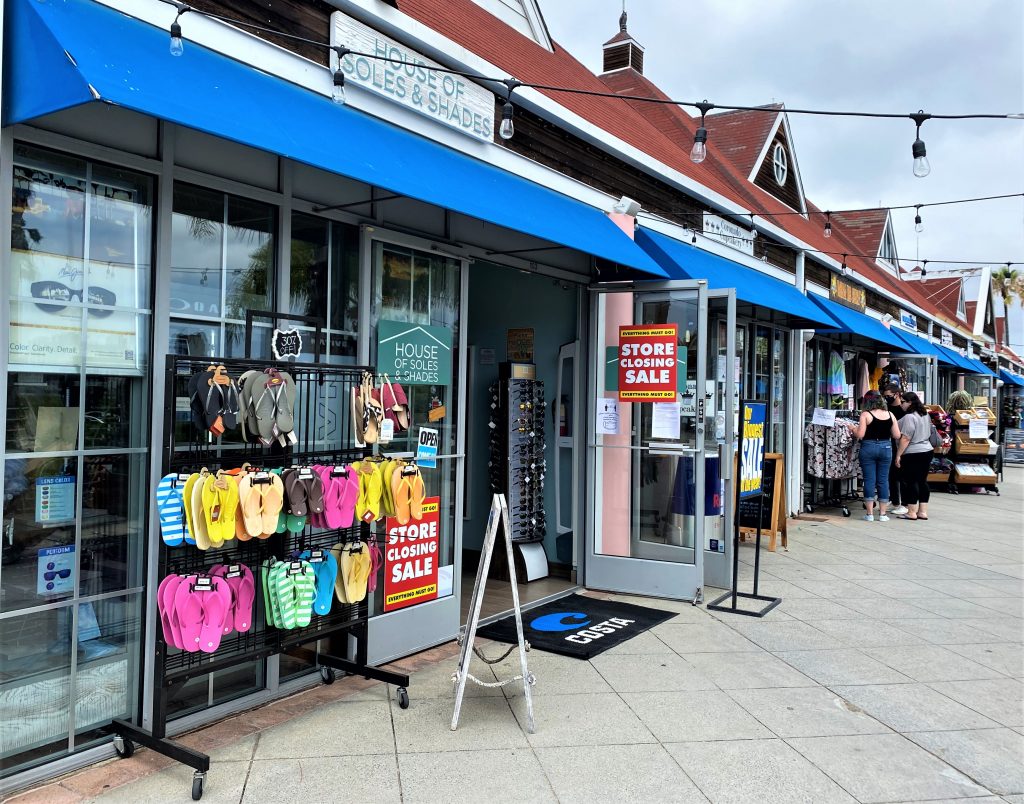 The Art for Wildlife Galleries, which is the only original tenant, will be closing at the end of July, when the owner retires. The gallery will be hosting a closing sale from July 10 through 12.  In its place, local owners Colleen and Jay Cavalieri will open VomFASS Coronado Tasting Room, featuring specialty olive oils, vinegars, wines, beers, and spirits all with personalized tags. The military brought them here 22 years ago and they have mostly called Coronado home since. They recently closed their Hillcrest store and are thrilled to have finally found this location. With the vibe of a European tasting room, they plan to create a wine bar and are exploring ways to continue their variety of tastings and winemakers’ events, whiskey workshops and many others, with the new safety precautions in place. A discount for locals is also planned. To check them out, before their anticipated late September opening, go to www.coronadotastingroom.com.

With regards to future expansion plans of the Ferry Landing, Commissioner Bonelli assured residents that, “We have a track record of seeking input and adjusting as we did last year when the proposed master plan included a hotel and we have now taken that off the table.” He highlighted that the Ferry Landing is divided into two leases and they are hoping to combine that into one, and they expect to get an updated proposal within 12 to 18 months. “At that point, we will once again seek public input, make needed changes and then move forward with future plans to ensure an amazing venue for residents, visitors and businesses,” he concluded. To keep up to date on the Coronado Ferry Landing, check out www.coronadoferrylanding.com.

UPDATE July 28, 2020 - The Planning Commission today denied the request for a Major Special Use Permit that would have set in motion...
Read more
Business

Investors Keeping Faith As confirmed virus cases continue to grow across the U.S., predominately on the West Coast and in the Sunbelt, investors seem to...
Read more
Business

After more than a decade of discussion, the biggest decision of the Council meeting was to move forward on the Road Relinquishment for State...
Read more
People

"We need to start the conversation of racial inequality early at home and then continue it all through school. Education is one of the...
Read more
Advertisement
Advertise Here (Get Rates)