Over the past few months, Coronado residents have expressed opposition to the proposed draft of the Port Master Plan Update. At well attended summer meetings and through letters and emails, the community spoke out and the Port Commissioners listened. Mayor Richard Bailey stated he has also continued reaching out to Port staff and commissioners, “communicating Coronado’s position.” On July 24, 2019, Mayor Bailey, with support of the full Coronado City Council, sent a six page letter to the Port of San Diego detailing Coronado’s position on the PMPU. (Full text of the letter can be found on the city’s website).

On Thursday evening, several of the approximately thirty attendees expressed resentment over outside forces pushing big development and high density housing plans on already densely built out Coronado. There is agreement from many living at The Landing on First Street that the Ferry Landing probably does need a “face-lift,” but major high density facilities of any kind are very undesirable.

Representatives of the Coronado Arts community renewed their wishes to see a performing arts venue capable of serving about 300 patrons built in the Ferry Landing area. Others stated that more open space, environmentally sensitive recreation and access to water activities would be welcome. 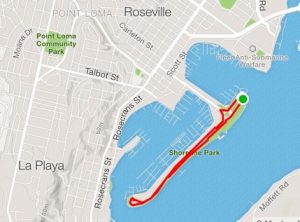 News from Port District 1’s Fight Against the PMPU

Coronado is not fighting the PMPU alone. The Port held a Community Discussion at Portuguese Hall on Shelter Island on Wednesday evening, August 28. The meeting room was standing room only with over 300 attending. While Coronado, District 10, was not on the agenda, citizens of Shelter Island and Point Loma areas adamantly opposed the PMPU Draft. Many residents emphatically voiced their opposition to high rise hotels and increased density on Shelter Island. A long, proud history is something shared by generations from the Point Loma and maritime Shelter Island areas as well as generations of Coronado’s Emerald Islanders. The two districts also seem to share similar visions for their futures.

The Port has received 3,000 letters from people in many of the 10 districts criticizing the PMPU Draft. Every “quality of life” circumstance would deteriorate in already highly built out communities. Just as developers have expressed wishes to build out the Coronado Ferry Landing bayfront with new hotel rooms, retail/restaurant and commercial buildings, they want to do the same on Shelter Island. The Port would reap rewards of high rent revenues, but residents and local business would suffer greatly. Increased traffic along access streets through Point Loma would create a nightmare of congestion and pollution for residents. The increased traffic along the 5 freeway would negatively impact every one of the Port’s 10 districts, including Coronado.

Port Commissioner Chairman Bonelli’s acknowledgement of the impact the citizen communications are having on the Port Commissioners should encourage everyone to always let their government entities know what they want and don’t want.

Save Coronado Wants Your Help

Village Theatre shut its doors in mid March and still does not have a reopening date. Lance Alspaugh of Vintage Theatres laughs, "I wish...
Read more
Community News

Spread of the novel coronavirus has caused the County of San Diego to be flagged by the California Department of Public Health, positioning the...
Read more