Save Coronado Wants Your Help Before July 31

Last week Coronado Responded to the Draft of the Port Master Plan Update. Now, locals are taking matters in their own hands. SaveCoronado.com has been launched by residents Susan Anderson, Kelly Sarber, and Brad Gerbel. This group is not new in protecting Coronado as they were actively involved in the “Save Our Beach Coronado” initiative back in 2015. That movement focused on grassroots opposition to the proposed concrete bike path on the beach. A letter sent to The Coronado Times in 2015 stated that, “We are blessed to live in this community and it is our responsibility to work together to protect our most precious treasure — Coronado Beach.” And they did. When it was time to join forces again for the preservation of Coronado’s unique small town character, the same organizers reached out to the “Save Our Beach Coronado” group that had formed with about 500 people, and found themselves with similar commitments from residents to write letters and show up at meetings to stop a proposed 350 room hotel at the Ferry Landing. Kelly shares that while the trio has complementary skills and a common goal, they are not the only ones fighting to stop the hotel. “Similar to the Save Our Beach, the effort brought us together again and we reached out to the same loosely-based, group of residents who now want to organize around a goal to stop a hotel at the Ferry Landing. We are creating an opportunity for people to join a vocal, resident-oriented group interested in protecting our small town character.”

SaveCoronado.com provides the details on what the Port is proposing and what the environmental and quality of life impacts would be if this zoning change is allowed. It also makes very clear that July 31 is the deadline to reach out to the port. A sample letter can be found online for residents that may want help getting their message to the port planners. Additionally, this same letter was printed on blue paper and included this past Wednesday, July 24, with the local Eagle-Journal publication delivery. All the pre-written letter requires is a signature and stamp and it is ready to mail! Residents are encouraged to formulate their own comments as well.

While a letter may seem inconsequential, Kelly explains the power that everyone’s combined statements have in forcing the port to respond to the specific opposition to the hotel in addition to the political opposition from Coronado city council. When asked how many letters she hopes would be received by the port, she said, “we hope to see hundreds, if not thousands of written or emailed comments in opposition.” Kelly also points out that while other cities were visited by the port’s planners, Coronado had, by far, the most participation and media coverage, from 4/5 of San Diego’s TV stations plus hundreds of residents in attendance.

Kelly summarizes, “the Port should redirect their focus to reflect future plans that are conscious of what makes Coronado unique and not build another massive, shiny tower hotel with limited recreation or public access. The residents have stated they don’t want any hotel, especially a Miami Beach type proposal similar to what’s happening at Seaport Village. Plus we already have three huge hotels. Instead, why not create a unique experience at that property that reflects the Coronado small town feel and creates a hometown visitor experience that compliments our environment.”

As mentioned in the Port Master Plan Update article, Mayor Richard Bailey, who sides with the residents, explained that because the Coronado Ferry Landing LLC is a tenant of, and reports to, the Port of San Diego, the city has no power to prevent development on port owned property. It is up to the port to set policy in their Port Master Plan which includes restricting development along the Coronado side of the San Diego Bay. Every council member and Coronado’s City Manager stands in solidarity with Coronado residents. 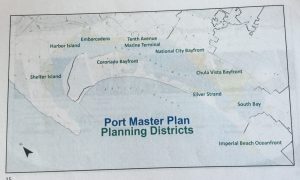 Kelly points out that there may be other San Diego cities that are also part of the port’s district that would love and benefit from having a new hotel, with the resulting investment in the development of their water front property, including National City, Imperial Beach and Chula Vista.

Local sentiment is that the port should not move forward with their plan to build a 350 room hotel at the Ferry Landing with the knowledge that it would inevitably cause a political rift with Coronado, which no one wants. Kelly simplified the process ahead and stated that their grassroots organization’s goal is to make sure the port removes any type of zoning or policy change that would allow a hotel to be considered at the Ferry Landing. She concluded that “if a hotel were to be allowed by right, the port would be in the ironic position of championing the concept through all final approvals with the California Coastal Commission, against the wishes of the City of Coronado and people who live here.” She continued, “the Shores and the bridge forever changed Coronado’s character and the residents didn’t really have a say, so now Save Coronado is taking a stand that any further changes that create traffic and deteriorate the residents’ quality of life are not acceptable.”

Visit: SaveCoronado.com for a copy of the sample letter and additional information.

A VA home loan is a $0-down mortgage option that is issued by private lenders and partially backed by the Department of Veterans Affairs...
Read more
City of Coronado

The City of Coronado is adamant that its ADU (Accessory Dwelling Unit) laws meet state mandated standards, but the city is being sued by...
Read more