At the close of the Friday, July 26, 2019 SANDAG Board of Directors Meeting on RHNA (Regional Housing Needs Assessment) the Directors voted 10/8 to reverse their previous decision requiring Coronado to find land on which to build 808 high density housing units, to an increased 1,000 new units. This stunning reversal came after many speakers rose to complain, and explain why the current RHNA Methodology is seriously flawed. Their pleas were dismissed. The Board decided that the lower number allotted to Coronado (the original 1800 had been reduced to 808) due to thousands of Navy jobs, was not fair to larger communities within SANDAG, even though those communities do have much more buildable land to work with than Coronado’s built out 2.2 square miles.

At the July 12, 2019 meeting which ran long, the Board had decided to postpone the vote on Agenda Item 7 re: RHNA Methodology, to the July 26th meeting. Coronado’s Mayor Richard Bailey had pushed back against the original 1,800 RHNA units assigned to Coronado. Bailey won support from other SANDAG members, including Mayors Faulconer and Rebecca Jones, for consideration to be given for a lower unit number, due to large number of Navy jobs and lack of buildable land in Coronado. Coronado citizens and all Coronado Councilmembers had voiced sound objections to this illogically large unit demand. These combined efforts succeeded in lowering the Coronado RHNA requirement to 808 high density housing units.

Previous articles and letter from Mayor Bailey explain the origins of how RHNA housing units were assigned to each California region by the California State Legislature. And as noted, not all California counties are expected to meet RHNA density housing requirements. Most notably, high density housing proponent State Senator Scott Weiner’s (D) Marin County, Senator Mike McGuire’s (D) Napa, Sonoma, as well as Santa Cruz, and Santa Barbara Counties are exempt. If these wealthy, northern California Counties had not been omitted from the State’s RHNA allotment, the 171,685 units assigned to San Diego County might have been significantly lower. 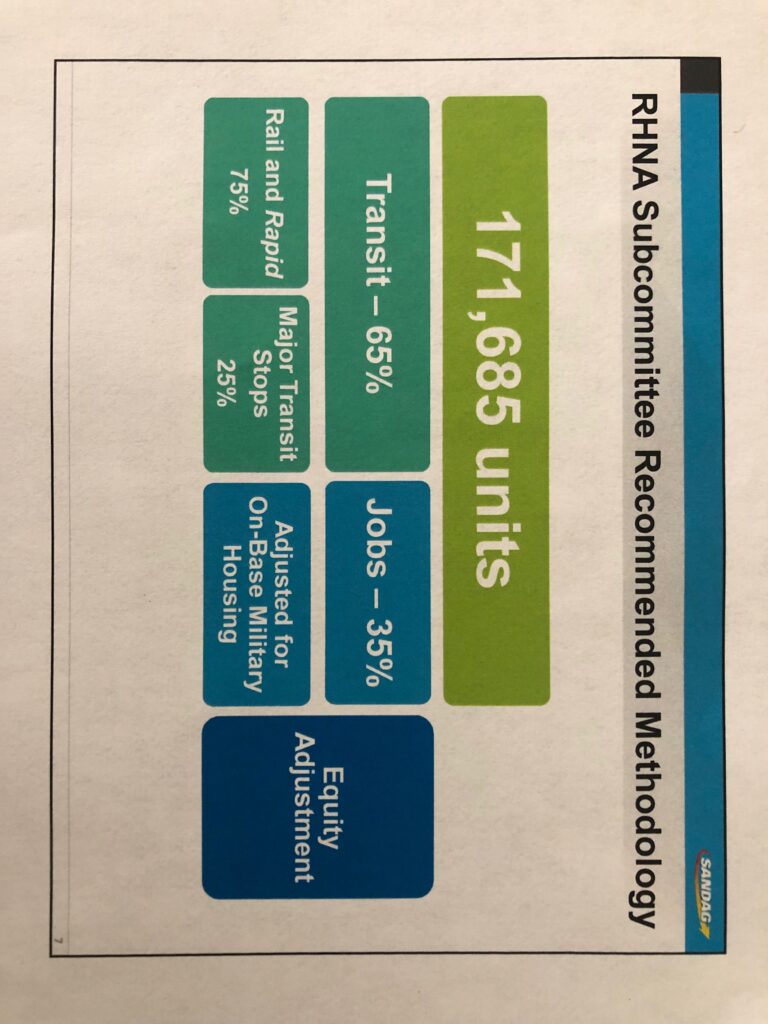 Determining the methodology process included numerous meetings of the RHNA Subcommittee as well as the Regional Planning Technical Working Group (TWG). Differences in opinion were great, expectations were high. The methodology debated and compromised was finally to be voted upon by the SANDAG Board on July 26, 2019.

The RHNA Subcommittee Recommended Methodology to be voted upon is shown in the tables below:

The Public Weighs In

Before the vote was to be taken, several audience attendees addressed the Board. Coronado Councilman Bill Sandke, opposing the allocated 808 RHNA number, brought a presentation of slides showing what Coronado looked like from the air. His point was that there was no available land upon which to build 808 high density housing units. Sandke also explained that smaller single family homes were being demolished and four ‘starter’ homes were going up in their place, which is exactly the kind of development that the RHNA allocation is calling for and Coronado is doing it.

Borre Winckel, President of Building Industry Association of San Diego, presented a Table of Current, Actual, Remaining and Proposed housing numbers from the previous RHNA 11 Year Cycle ending in 2020. During these 11 years the RHNA goal number of 161,980 was missed by 55%. The large land mass County of San Diego had built only 6,415 of their goal number of 22,414. The City of San Diego assigned 88,096 had reached only 39,406 units.  Winckel explained that the State’s untested RHNA Methodology was “seriously flawed because no scientific economic analysis had been done to determine unit numbers needed and where. The problematic Methodology to build high density units was overly reliant upon rapid mass transit that does not exist.”

Winckel continued, “red tape, onerous regulations; very high fees had kept development stagnant during the last RHNA Cycle and would continue to do so. Every proposed project is under litigation.” There is an ongoing disconnect between what the consumer wants and what the planning commissions are demanding. “SANDAG alone is experiencing a 43% decline in permits issued for housing production.”

Further Public Comments included those by Mary Scyocurka of Coronado who clearly explained about the “flawed” RHNA Methodology.

Coronado Councilman Mike Donovan, representing Coronado at the table (Mayor Bailey was out of town due to long planned travel), argued that the number of units assigned to Coronado made no sense. Donovan questioned, “Why wouldn’t we include available land and current density in our criteria? The Navy base is twice as big as our city. We have 2.2 square miles of land that can be developed with residential properties; and that land is one of the highest density cities in the county. I would advocate for that consideration being included [in the methodology.]” He went on to state that in the last RHNA cycle, Coronado was one of only four cities that exceeded its goal.

SANDAG Executive Director, Hasan Ikhrata did not agree. At the prior meeting Ikhrata had stated they must agree upon a number acceptable to Sacramento, regardless of local residents’ needs.

Georgette Gomez (D), representative of San Diego District 9 and current President of the San Diego City Council, did not agree with the opposition. Gomez made a substitute motion that removed the Navy jobs carve-out from all districts, and which increased Coronado’s RHNA number from 808 to 1000. Gomez’s substitute motion quickly received an “I second that,” and a third as well. Alejandro Sotelo-Solis (D), Mayor of National City, was seen giving a double thumbs up to Gomez as her substitute motion passed by a margin of two. Also supporting the substitute motion were Mayor Mary Salas (D) of Chula Vista and Mayor Catherine Blakespear (D) of Encinitas, also the Vice Chair of the SANDAG Board of Directors.

San Diego City Councilmember Gomez believes high density housing, without parking, near mass transit is the solution. When asked though, Gomez did not admit to taking mass transit to her City Hall job from her home in City Heights. No SANDAG member raised their hand to say they had arrived to the meeting via mass transit. But many seem to agree with Sacramento, that mass transit and high density housing should be good enough for their constituents.

The substitute motion, with the higher RHNA housing number, will be voted upon Friday, August 23, 2019. However, it is imperative that opponents to this new motion act by August 9, 2019. Email the SANDAG Board at clerk@sandag.org and pass this information along so that SANDAG may hear objections to the RHNA Draft Methodology from as many as possible.

To hear the full audio of the SANDAG Board of Directors Regular Session on July 26, 2019, click here.

The recent damage to the Ocean Beach Pier caused by the high surf in San Diego brings to mind many of the photos in...
Read more