A highlight from the August 21, 2019 Coronado City Council Meeting was Mayor Bailey’s proclamation of Ashley Hope Linder and Carter Louise Graves Day. These two Coronado super-athletes competed in the grueling 32 mile, Moloka’i -2-O’ahu Paddle Board World Championships on July 28, 2019. Linder and Graves competed in the Prone Stock Division across 32 miles of the Ka’iwi Channel. They both are fitness professionals in local Coronado training gyms.

Councilman Marvin Heinz had requested a presentation of Consent Calendar Item 5 i. regarding spending for additional body worn cameras, licenses, docking stations and unlimited video storage. This gave Coronado Police Chief Chuck Kaye an opportunity to explain that the city of Coronado was the first city in the county to adopt body worn cameras for law enforcement. Chief Kaye said the body cameras, “played a tremendous role in reducing and resolving citizen complaints and increasing transparency.” Use of body cameras also assist in officer training. All patrol members are equipped with a body camera.

After council discussion and public comments, the council unanimously approved a $20,000 budget to co-host a free family-friendly 50th Anniversary Celebration at the Coronado Cays Park on September 28, 2019. The Grand Caribe Causeway Cul-de-Sac will be closed for the event. Programming will include four hours of music by two popular local bands, kid-friendly activities such as obstacle courses, carnival games, face painting and a dunk tank. Local food vendors and three Coronado Cays brewery owners will provide refreshments. Local artisans and vendors are invited to display and sell their items. An aerial photo capturing residents spelling out 50 will be taken and an evening family-friendly movie screening will round out the day of celebration.

Beginning at 5:30, and for the next three hours of the meeting, the council considered the allocation of funds to those community organizations requesting grants. Previously, at the June 18, 2019 council meeting, the budget for Fiscal Year 2019-2020 was unanimously adopted. The City Council agreed to a $1,000,000 cap on grant awards.

Twenty nine grant applications were self-identified into four separate Community Elements – Arts, Community Pride/Sense of Place, Economic Development and Social Services. The Coronado Historical Association, in its final year of a three-year grant contractual agreement, reduced the available grant funds by $381,350, leaving an available balance of $618,650. The Sub-Committee, composed of Mayor Richard Bailey and Councilman Mike Donovan, was assisted by independent graders to help assess and maximize the grants towards the greater good for the community.

The city traditionally awards approximately $37,000 to the Memorial Day and July 4th activities from the Community Grant Fund. It was decided that that $35,500 would be set aside, but not awarded. This brought the available funds to be awarded to $583,150.

Councilmember Donovan and Mayor Bailey provided a brief subcommittee presentation on grant recommendations; the entire council then asked questions of the subcommittee. Councilman Marvin Heinz requested that when each applicant steps up to describe their grant request, they explain, “why taxpayer dollars should be allocated for their entity, why it is a public purpose and how it benefits the community.”

Representatives from 27 applicants stepped to the podium to explain their needs and answer the questions proposed by Councilman Heinz. The applicants’ presentations, and those of their supporters, may be heard in entirety by accessing the City of Coronado’s website video of the 8/20/19 city council meeting.

Most of the public speakers stepped up to support Coronado SAFE. Several heart wrenching statements were made regarding the urgency to be able to address children’s mental health needs without any delay. Mental health professionals as well as Coronado teachers and school staff were among the 14 people who urged full funding of the grant funds requested by Coronado SAFE.

Five speakers rose to support the Coronado Island Film Festival, which falls under the umbrella of the Arts. Camp Able, the Coronado Historical Society, and new grant applicant Emerald Keepers also received support from the public. Although Emerald Keepers have not yet received non-profit 501c3 status for which they have applied, council approved a portion of their funding request, pending status approval.

After three hours of presentations, council discussion, and vigorous debate, Community Grant Funds were awarded to the four Community Elements with $22,395 remaining. Those remaining funds were evenly divided at $7,465.00 each to augment the Chamber of Commerce under Economic Development Element, Coronado SAFE under the Social Services Element and the previously unfunded Emerald Keepers under Community Pride/Sense of Place for a total of $583,150. Further breakdown as to allotment of funds to each entity covered within the four Community Elements was simplified in the City Manager’s Weekly Update and can be seen below: 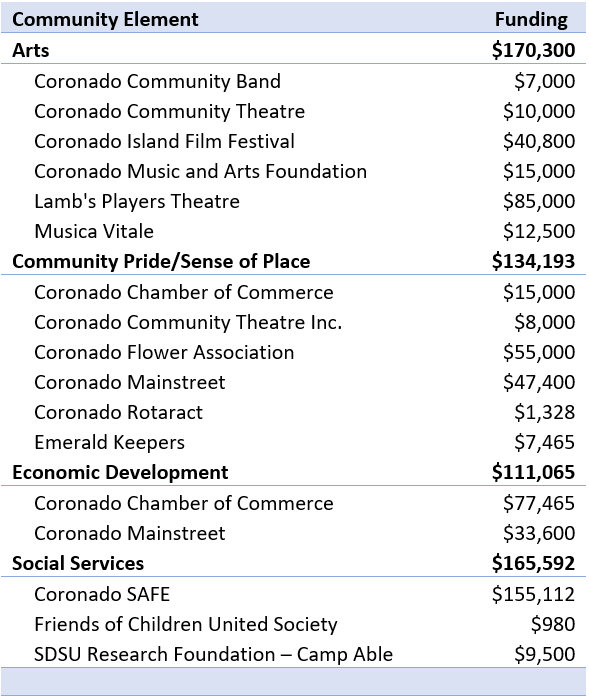 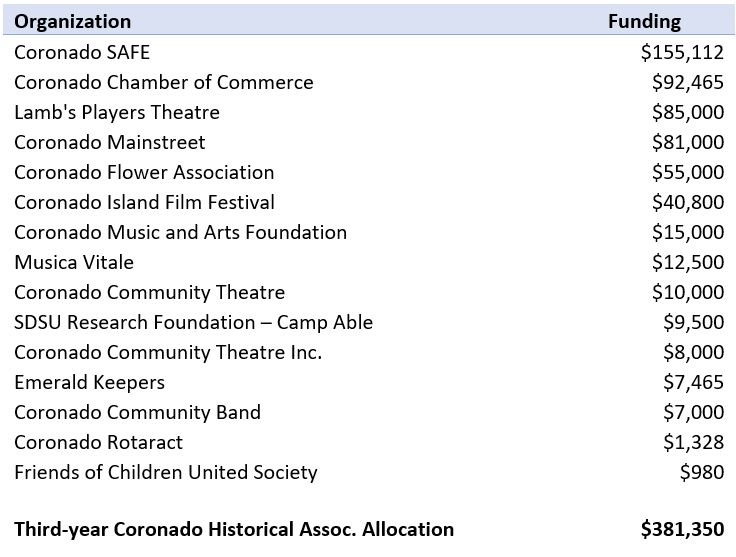 Library Board of Trustees:

Mr. Bill Wilson won unanimous approval to be appointed to serve a full three year term of service to the Library Board of Trustees.

Two requests for Historic Alteration Permits for Remodel and Addition were awarded to:

645 J Avenue, approved, all voting Aye with Councilman Sandke recusing himself due to his home’s proximity to the subject house.

Adopted – A Resolution of the City Council of the City of Coronado Amending its Personnel Authorization and Compensation Plan for fiscal year 2019-20; providing a 2.75% salary increase for self-represented and executive management employees; and providing benefit adjustments of 2.4% to all benefited employees.

The next Coronado City Council meeting is scheduled for Tuesday September 3, 2019.