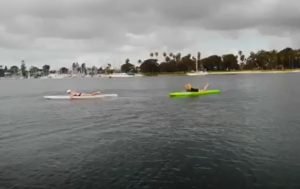 Ashley Hope Linder and Carter Graves, two local Coronado fitness trainers, are competing in the world championship prone paddle board race from Molokai to Oahu in Hawaii on Sunday, July 28. The race is touted as being “The World’s Most Challenging Paddle Race.” The two will be traveling as a relay team across a channel of water spanning 32 miles and have high hopes, as well as months of preparation, to bring the world championship title back to Coronado and represent their home island in the Hawaiian Islands.

Ashley spoke with Coronado Times back in March about how to make the gym a habit; you can read about that here. Paddle boarding is no different for her. Once Carter approached Ashley in January about the paddle board race, Ashley committed to training 2-3 times a week for the upcoming competition. Her training plan alternated between solo practices and training with Carter. 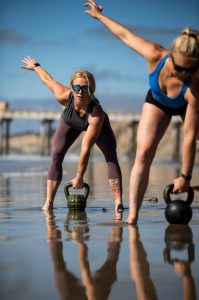 Carter and Ashley are friends along with both being fitness professionals in Coronado. While Ashley runs CrossFit Proteus, Carter spends her time coaching at Coronado Fitness Club. In 2014, Carter won the female stock division in her rookie year. Since then she has paddled the channel two additional times solo. Carter shares, “my favorite aspect of this race is the dynamic nature of the ocean. You can train your butt off, and then get there with conditions that are completely different than expected. My maiden journey was a prime example of this as not knowing the crazy beast of the Ka’iwa Channel actually gave me the space in my brain and body to paddle the race of my life.”

This year she brings Ashley with her to take on the relay division. Ashley believes that having Carter as her partner is a perfect fit. “It’ll be a challenge. I am a novice but I feel confident going in with Carter’s experience.” Carter is equally excited to take this on together, “5 years later [from her 2014 debut] and things have changed as my life has become more balanced and other things have grown in importance including relationships and friendships. This year I am so excited to share this experience as a relay with Ashley as she has become like a sister to me. Because this sport and race have become such an important part in my life, to be able to share this with her is probably one of the most fulfilling things I could imagine.”

At a high level there are a few incredible things to know about the race. The first is that Ashley and Carter are competing in “prone” paddleboard. SUP (stand up paddle) and Prone paddle boards are similar in general shape, but are paddled differently. SUP uses oars, while prone uses the paddler’s arms.

The 32 mile race is also a huge undertaking. Ashley expects the race to last between 7 and 9 hours, and concerns include: hydration, nutrition, nausea, and sunburns. In order to race, Carter and Ashley are responsible for finding their own medical team and photographer.

The relay aspect means that Ashley and Carter will alternate between being on the boat with their support crew and paddling. This takes a tremendous amount of strategy, but also some flexibility as much can change once the pair get out on the water.

Going to the wold championship and representing Coronado has an obvious goal to Ashley – winning. But there are a number of other reasons that Ashley is looking forward to the challenge. “I want to have the stamp of Coronado. I want to show others that we do big things in our small town. Especially in the water based fitness world.” While Ashley wants to show the world how great Coronado is, she also wants to prove to people how great they are themselves. “I’d like people to look at something really big and understand they can do it as well. We are not limited by our fleeting insecurities.”

The biggest lesson Ashley has learned that she shares is, “even if you are scared or intimidated, if you have the support of others and challenge yourself, you can do anything.” Carter admits that this last year has had challenges for her, “The last year in my life has been one of extreme personal growth and change. I honestly never thought in a million years I would be paddling in this year’s race. This year’s journey to Molokai 2 Oahu has showed me that really anything is possible with faith, courage, hard work, and community. Through both Ashley and my stories, we hope to share and inspire others to follow whatever it is that sets one’s heart on fire, and embrace the amazing people and community around us to reach high for our dreams. We are both so thankful for all the support of our Coronado community and cannot stress this gratitude enough.  Here we go!”

To watch Ashley and Carter this weekend, Ashley shares that she will be posting LIVE on her Facebook and Instagram.