Heath Hardage Lee wrote The League of Wives: The Untold Story of the Women Who Took on the U.S. Government to Bring Their Husbands Home from Vietnam. This historical account discusses how military wives banded together to form The National League of POW/MIA Families, which helped bring home hundreds of Vietnam veterans. Mrs. Lee will be in Coronado this week for her book tour and to celebrate to opening of an exhibit dedicated to these women.

What initiated your interest to write the account of POW/MIA military spouses in The League of Wives? Did any current movements like #metoo or equal pay inspire you to pursue this story?


It took me about five years to write The League of Wives. I first discovered the story through Phyllis Galanti. She’s a Richmonder, like me. Similar to the Stockdales in Coronado, the Galantis have many things named after them in my town. Phyllis was a good friend of my mother’s and she passed away unexpectedly. I knew a little about her association with the POW/MIA movement and asked myself—why didn’t I talk to her about it? There was so much history and culture in her story. Phyllis’s papers are in Richmond and when I read them, I thought—oh my god! This is an epic war story! While Sybil Stockdale is the most important person with regard to this movement, Phyllis and her diaries gave me the road map. It told me who I needed to talk to and where I needed to go.

I began writing this book before #metoo, black lives matter, or time’s up movements began. The timing was a coincidence because it does fall in line with those messages. The “keep quiet” policy I discuss in the book was about stopping women from talking about our government publicly. This type of sexism and suppression has been going on for centuries, but the story of these women and their message certainly made it topical [in terms of recent movements].

Some would say these women are feminists, just by their activism and lifestyle changes due to having a POW/MIA spouse. What are your thoughts on this?

I am very well versed in feminism, as I identify as a feminist. But these women would never have called themselves feminists— they identified as humanists. They believed a woman could do whatever she wanted. During their era, feminism was associated with communism. It took me a long time to figure that out. They wouldn’t even let me use the word “feminist” to describe them. Some of these women became feminists later. With their husbands imprisoned [in Indochina], they were the woman and man of the house, mother and father, and activists. They became empowered and more confident.

Your story opens with Sybil Stockdale in Coronado, how did the family assist you in writing this book?


Sybil’s children were kind enough to let me interview her before she passed away. I spent a lot of time with the Stockdale family and we developed a close relationship. Her children gave me access to some of her papers, letters, and journals. After Sybil’s death in 2015, the family graciously allowed me to be the first person to work with her diaries, which had been sealed until her death at the Hoover Institute Library and Archives at Stanford. Her journals played a crucial role in my research. It was the day to day of her life—her emotional state, her thoughts about her children, her depression, and various health scares. I also obtained diaries from the East Coast wives like Jane Denton and Phyllis Galanti. There are so many dairies, letters, videos, tapes, and oral histories that helped flesh out both the book and the exhibit.

Did you visit Coronado while you were writing LOW?

Yes, every January in the past four years to interview these military wives. And the town of Coronado is such a big character in this book—it’s the birthplace of naval aviation and of The League of Wives. It’s very symbolic. What I really loved about the California women was how forthcoming and brave they were, and the East Coast wives followed their suit. Sybil Stockdale is the singular founder of this movement. I wanted to set the record straight on this issue. The history of these military wives was not written down or archived, but thankfully some of these women kept documents. It was a big puzzle to put together and it had a lot of holes. I like a challenge, but it was difficult to piece together.

Tell me about the researching process. There are so many women and facts to keep up with this book. How did you go about keeping all the information straight?

As a historian, I have a number of techniques and systematic ways of dealing with information. I had a binder on each woman. And I did really big outlines that I tacked up on the wall. The main thing I knew I had to focus on was intersections—weaving the stories of East Coast and West Coast military wives together, discovering when they may have overlapped at certain times.

I bet it’s easy to fall down the researching “rabbit hole.”

So easy! And I went down a lot of rabbit holes. I had a few chapters about some side people from the Nixon administration. Thank goodness for my editor! He said “you’ve gotta keep these women (the POW/MIA wives) front and center.” He also allowed me to express my feelings about these so-called “peace activists” and my frustration on how indoctrinated these wives were by the Navy’s “keep quiet” protocol. They were scared that if they spoke out their husbands might die or it might ruin their careers.

The sixties was a really fascinating time. There is the feminist movement going on, but these military wives bound by “social graces” and the “keep quiet” protocol set forth by the government.

“Keep Quiet” was an interesting policy. President Lyndon Baines Johnson didn’t come up with it. It had roots in World War II and was loosely imposed prior to the Vietnam War. But LBJ really enforced the hard line and told these ladies they could derail negotiations or put their husbands at risk if they spoke publicly. He didn’t respect women or what these wives were dealing with at home. These women were coding secret letters to their husbands and they knew the Geneva conventions of War were being ignored. After a few years of “keeping quiet,” the absurdity and impossibility of “Keeping Quiet” is what pushed Sybil and other wives to finally speak out in The San Diego Union Tribune. LBJ knew they were being tortured. He was good at domestic policy, but his foreign policy was a failure.

I love how Richard Nixon is the good guy in this story! All most people remember him for is Watergate, but in LOW he comes across as this genuine, caring person.

A great point to make! In this book nobody is what they seem. You think the “peace activists” would be the good guys, but Cora Weiss is almost villainous. I reached out to her numerous times, but she would not allow me to interview her. And LBJ and his administration constantly belittled the women’s intelligence.

But Richard Nixon was smart enough to see the plight of these women and prisoners as a unifying cause. He was empathetic to veterans, being one himself. To POW/MIA community, Nixon was the good guy. They called him Richard the Lion-hearted. He was so respectful of these women. He gave them a platform and they loved him for it. He had more women in his cabinet than any previous administration. Unfortunately, Watergate will always be the legacy he is known for.

What feedback are you receiving from former and current military wives regarding this book?

The former military wives I interviewed seem to appreciate it. They felt empowered by their activism, but none of them wanted credit for this work. They were very modest in that way. But current young spouses can’t believe this ever happened because technology is so much better now. They did say the “rank culture” in the military spouse groups is still embedded into modern military culture. 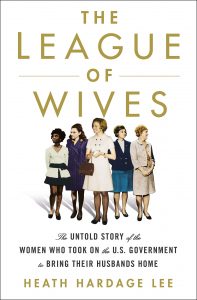 Reese Witherspoon’s optioned your book for a movie. With the Disney buyout and dissolution of Fox 2000 (the studio producing the movie) has this affected the production process? Do you they plan to shoot in Coronado and what is your role in this process?

I actually met with Reese’s Hello Sunshine production team last week in Los Angeles and I’m an executive producer for the film. All I can say is that we have moved to a new studio and production is moving forward. They are still working on the script, but I wouldn’t be surprised if they shot some scenes in Coronado. L.A. is so close, right?

Learn more about “An Evening with Heath Lee” here.