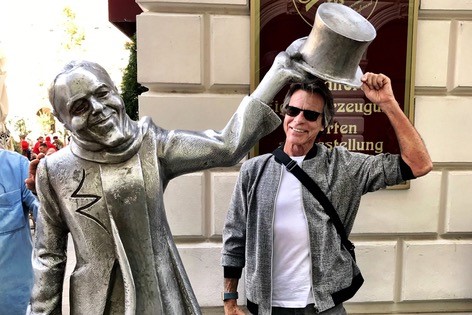 Imagine a world without imagination….

Thanks to newly appointed Public Art Commissioner, Brad Willis, Coronado won’t have to.

Brad, a 26-year Coronado resident is an author and former international network news correspondent, having received multiple awards for journalism and war coverage in Afghanistan, Iraq, Africa, Latin America, and Asia. More recently, Brad has worked with The Coronado Times and the Coronado Cultural Arts Commission as a visual storyteller, with an ever-growing portfolio of video pieces featuring local artists from Lamb’s Players, CoSA, Ron’s Garage Band, and others.

Brad’s newest endeavor is serving as the Coronado Public Arts Commissioner, succeeding Jeff Tyler who served in the position for eight years until December 2019.

Despite Brad’s good-humored insistence that he is “vastly more interested in art than bureaucracy,” he details his decision to enter public office as a way to serve the community of Coronado.

“A little over a year ago,” explains Brad, “I had coffee with Bill Sandke and asked him how I could contribute to the City. He suggested that I meet with Kelly Purvis (Senior Management Analyst, Arts, and Culture) and I was interested. Art is such a vital element of the lifeblood of any community. Its power and potential are far deeper than we realize, so one of my primary goals is to share the importance of public art and create greater public awareness.”

Sharing the importance of public art will be part of a strategic social media campaign, according to Brad.

“First, you need to have a conversation,” says Brad, “to beckon us into a richer awareness. One might think art is a luxury, but it is fundamental to our quality of life. Coronado has so much more to offer than its spectacular beaches. We are immersed in art. It is everywhere. Even the Fourth of July Parade each year is art.”

Brad elaborates on the important partnership between art and public awareness citing the Coronado High School Chalk Walk held in May 2019 as an example.

“The Chalk Walk was so magnificent for our students and community,” marvels Brad, “after I shared the (video) piece online, I had scores of people asking when and where it was. We’ve got a fantastic resource in the online community here. We know when the bridge is closed or the beach is polluted, we find lost pets. I intend to build an awareness campaign the same way – not in words, but in images.”

Brad’s passion for art developed most deeply during his time as a war correspondent. “Witnessing so much collective desperation and suffering,” says Brad, “I’ve come to really appreciate how healing environments nourish us. Take, for example, places like Budapest, Prague, Vienna – which have experienced phenomenal destruction. Yet they have brought back statues and works of art to transform the environment from one that depresses you to one that inspires you. Art connects us, enlightens us, and alters our experience of our environment. Art enhances cognitive development in our children, keeps us growing in our senior years, and is therapeutic with afflictions like PTSD, loneliness, and trauma.”

Brad approaches his new role as Public Art Commissioner with a host of ideas and anticipates a spring launch of the awareness campaign. Above all, his mission is singular – “to inspire vigorous joy and enrich the lives of people who live here.”