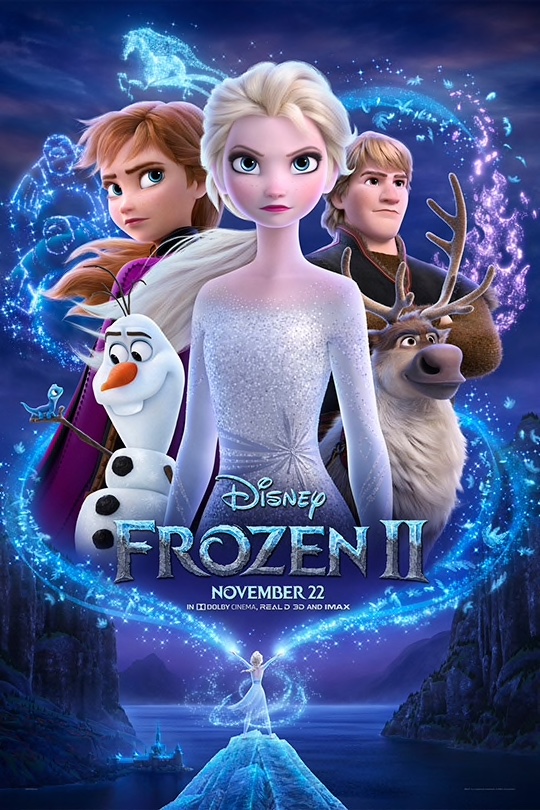 Just in time for the Thanksgiving holidays, Frozen 2 serves up quite the cinematic feast for Disney audiences. Pumpkins, golden-hued leaves, and pink skies brush across the digital canvas of Arendelle kingdom in this long-awaited sequel. Sound like a particular season, to you? (Hint: no it’s not winter.)

Like autumn, Disney’s Frozen 2 is all about change and transformation, and with that comes a sense of fear for the unknown (there’s two songs about that, too). 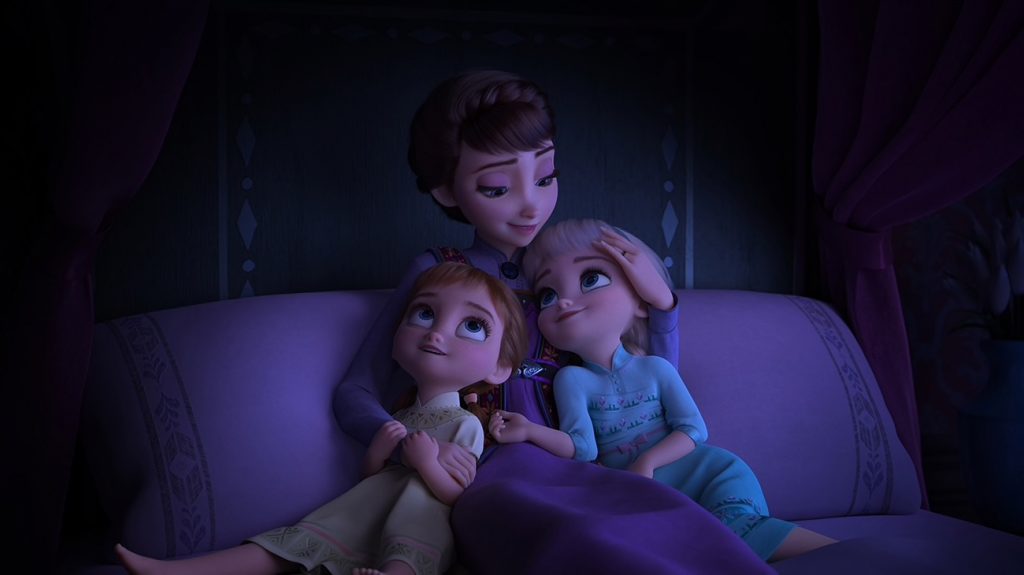 Taking a page from the classic Disney Princess films, Frozen 2 opens with a story—a bedtime story, to be precise. A young Elsa (Mattea Conforti) and Anna (Hadley Gannaway) gather close, as their father, King Agnarr (Alfred Molina), captivates them with a tale about an enchanted forest, a mystical tribe, a sudden betrayal, and a siren’s voice that saves the young king-to-be. Afterward, Queen Iduna (Evan Rachel Wood), the princesses’ mother, soothes her daughters with a sorrowful lullaby, “All Is Found,” about the powers of a river, and of fear and memory. The bedtime ritual is a touching moment between parent and child, and this scene reinforces the tragic loss for Elsa and Anna. 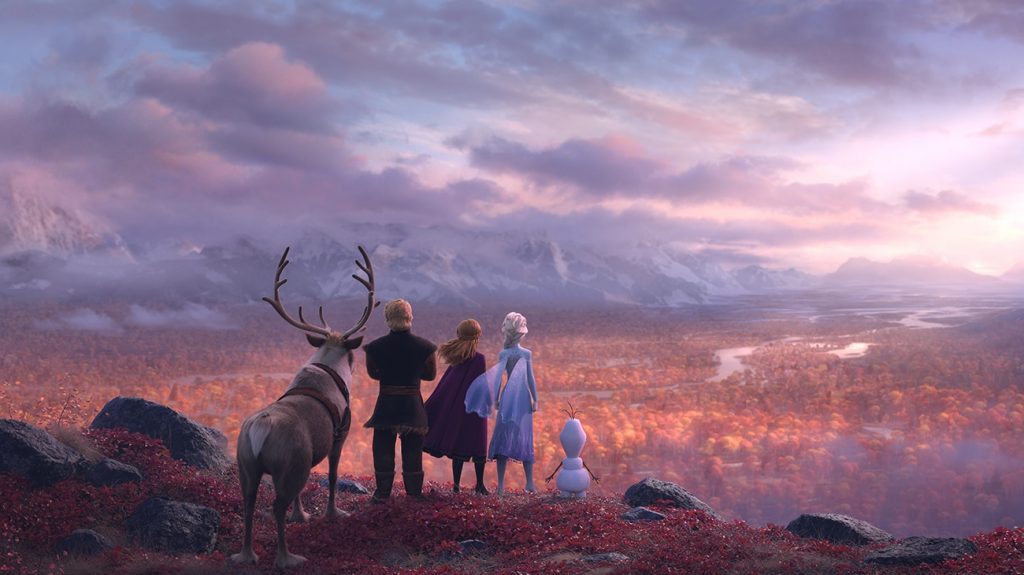 But, adventure awaits! As queen, Elsa (Idina Menzel) begins to hear the siren calling, too. Although she thinks she’s “had her adventure,” she still goes out “Into the Unknown” to discover an unfulfilled piece of herself. She travels to the misty enchanted forest for answers and the whole gang (Anna, Olaf, Kristoff, and Sven) join her in an attempt to keep Elsa out of trouble. 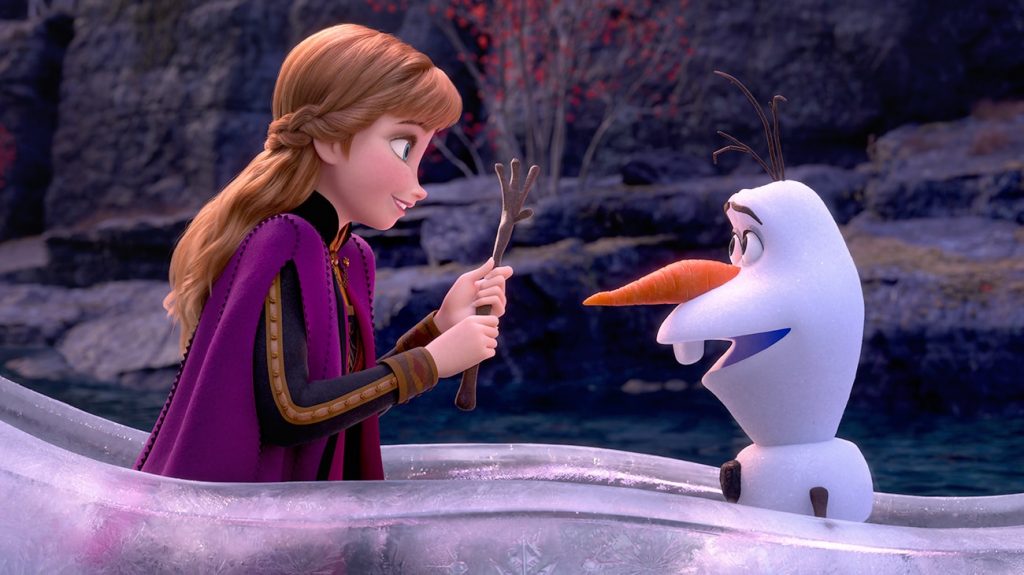 Although Elsa is queen, it is Anna (Kristen Bell) who exhibits regal behavior by acting as savior and protector for those she loves. Olaf (Josh Gad) and Kristoff (Jonathan Groff) provide the comic relief–which my young movie companions took great delight in. And while the songs (did I mention there is a rock ballad in this, too?) were artistic and powerful, something sounded a little off key with so many different genres of music in one film. 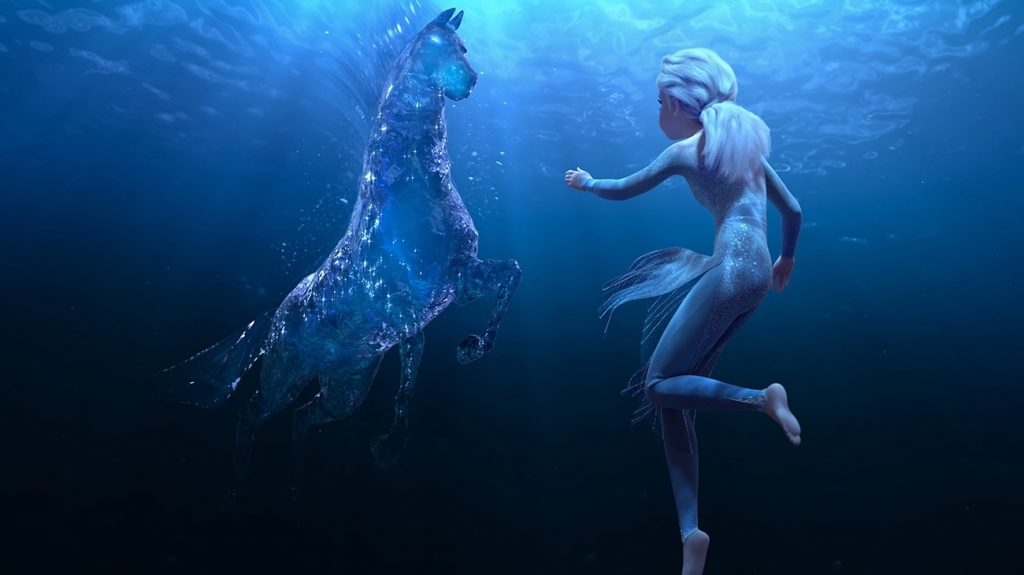 Like most sequels, when compared to the simple story of “sisterly love” in the original, this rather convoluted narrative attempted to tackle too many themes and backstories in its limited timeframe. But the real Disney magic shines in the remarkable digital animation, and overall my young companions thought this Frozen film was “better than the first.”

Sure, this movie takes place in a fictional kingdom in Scandinavia–but Frozen 2 may become America’s go-to Thanksgiving toast we’ve been looking for.

Rating: PG for action/peril and some thematic elements

Winter is coming.So it might be time to lace up your hiking boots, pack up your camping gear, and head for…the desert.About 90 miles...
Read more
Community News

November is National Aviation History Month and The Coronado Times is taking a look at some of the places, planes, and people chronicling the...
Read more
People