Before the New Year rings in, Coronado will be gaining another new eatery–the Boardwalk Beach Club. The former Maretalia restaurant space that abruptly closed its doors in early October will be revamped and rebranded into a “interactive dining experience,” according to David Spatafore, owner of Blue Bridge Hospitality.

With an ambitious timeline to open by Christmas, Boardwalk Beach Club with its motto of “Eat, Drink & Play” will seek to recoup a missing demographic of daytime diners looking for a casual Coronado dining option. Part sports bar, part arcade, and part ode to surfer culture, Spatafore hopes to attract families, dog lovers, and late night patrons into the upper level space located off Orange Avenue and Churchill Place.

The prolific restaurateur and Coronado resident draws his inspiration for the new concept from various surf culture phenomena like Spicoli from Fast Times at Ridgemont High, The Dead Milkmen’s “Bitchin’ Camaro” tune, and a Duke’s Dolls Surf Club poster (the iconic poster was hanging on the wall in the former Italian restaurant space).

At least six ultra-high definition televisions will be placed over the bar with many more featured along the walls. In addition to professional sports, surf videos will also be playing to highlight the new concept’s theme.

The arcade, complete with shuffleboard and billiards table, will be known as The Monte Carlo Room. Named after the infamous illegal gambling and prostitution vessel that became shipwrecked off Coronado’s shoreline on New Year’s Day in 1937, this room is destined to be a hotspot all hours of the day.

Endeavoring to give Coronado something it’s been lacking, a quintessential beach bar without the resort prices, Spatafore observes how “people have certain expectations when they come to a beach town. They just want to drink Mai Tais or margaritas and eat fish tacos.”

The new restaurant’s menu will be a simple fare influenced by coastal Pacific cuisines from California, Hawaii, and Baja Mexico. Like all Blue Bridge restaurants, there will be a daily Happy Hour menu from 3-6 pm and special events throughout the year.

On Saturdays and Sundays, the new brand will open at 9 am to accommodate sports fans interested in watching games on the east coast and allow patrons to feast off the tailored “Pancake Breakfast” menu.

The formal Maretalia furniture and decor will be replaced with a more colorful palette à la The Office on the Beach in Cabo San Lucas. And dog owners will be happy to know that the patio facing Orange Ave will be pet friendly.

“I’m throwing the rules out the window with this restaurant! It all about island vibes–with less rules and a ‘come as you are’ attitude,” says Spatafore. 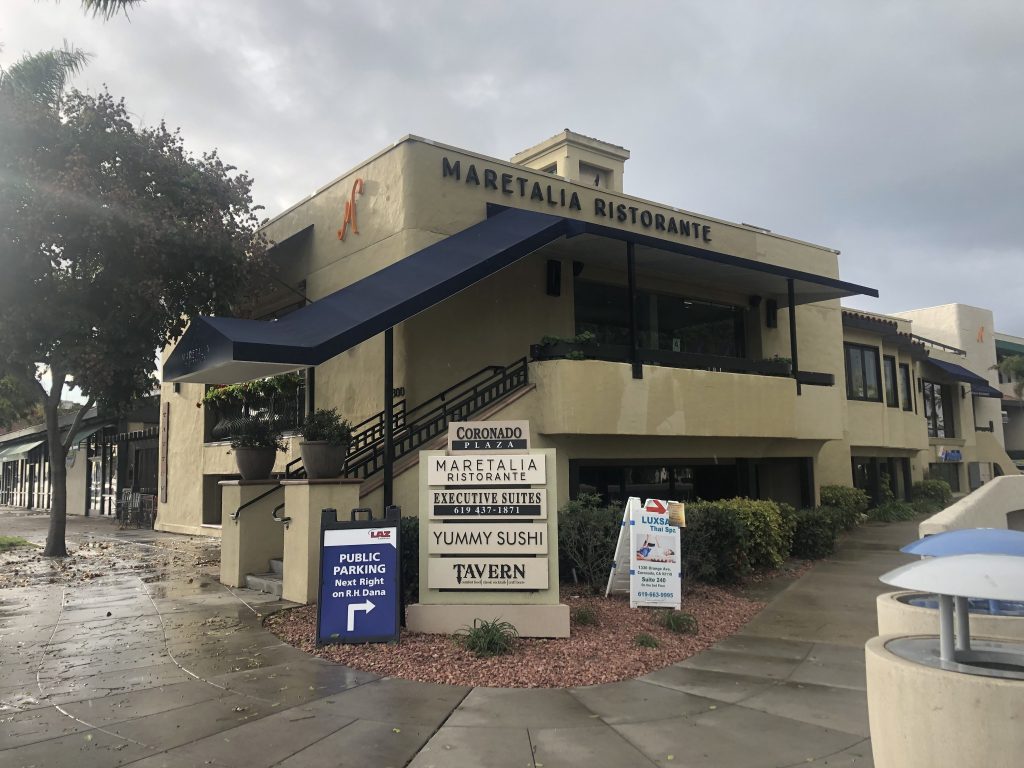