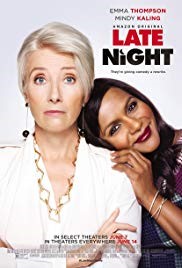 A veteran late-night talk show host, Emma Thompson as Katherine Newbury, has her world turned upside down when leadership points out that she has no women on her writing staff and that is a problem. So a woman, Molly Patel, played by the screen playwright and actor Mindy Kaling, who has no experience as a writer or a comedienne is hired to fill in the gender gap. The women are as different as an apple and an orange. They are separated by generation, culture, education, and experience.

The arrival of Molly shakes up the male writers and in the end turns the failing show around allowing Newbury to keep her show and her job.

I expected this to be hilarious and was very much looking forward to a night of laughter. I disappointingly laughed one time. My guest and I left the theater, looked at one another and at the same time said to one another, “she was trying too hard.” I was actually surprised that we had the exact same impression. The movie was filled with so many hits on subjects that are in the news now, from the Me Too movement to racial and gender issues. There was nothing subtle about the attempt to make points be heard and they were too much (and that’s shocking for me to say). My guest also pointed out that there are thousands of female writers and comediennes looking for work in the United States and the fact that they would hire someone with no experience was sort of a slap in the face to those who “do their time” to get a gig like this.

Emma Thompson and John Lithgow, who plays her husband Walter, are the only two actors who deliver performances with ease and believability. While the story was solid and had a happy ending with personal growth, acceptance, and friendships, it was lackluster and filled with too many cliches for our liking.

Rating: Rated R for language throughout and some sexual references