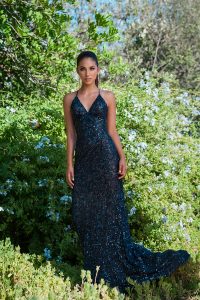 Stunningly beautiful seems like an understatement when referring to Miss Malibu Teen 2019, Coronado High School senior Zoe Hunt. Her beauty on the surface pales in comparison to the beauty of her personality.

I first met Zoe when she attended this year’s “Fashion with Compassion” fashion show presented by Coronado Girl Scouts Troop 6136. She attended to encourage and inspire the girls as well as to serve as a judge for their show.

My first question was: How are you Miss Malibu when you live in Coronado? (Having some personal experience in the local pageant world this was confusing to me). She explained that there is no longer a requirement to live in the community in which you compete; she loves the community and beach of Malibu and there is no longer a Miss Coronado pageant. After winning the title of Miss Malibu she went on to compete for the state title at the Miss California Teen USA pageant and placed first runner. In 2018 she placed in the top 20 for this competition from a field of about 80 competitors. When Zoe was 12 she wore the crown of Miss Coronado PreTeen and then Miss North County Regional PreTeen.

Zoe will be entering her senior year at CHS this fall. She has worked diligently to achieve her many accomplishments. She closed out his year with an overall 4.3 GPA and is a member of the National Honor Society where she was elected an officer as a volunteer coordinator with a goal of making volunteering more fun. She is a competitive sprint flatwater kayaker in the 200m, 500m, and 1000m distances. She has earned medals at Nationals as an individual and with a team. 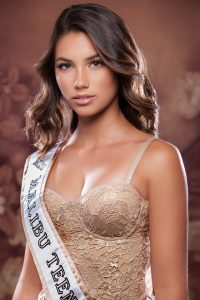 Zoe’s pageant path opened some doors to acting and modeling during her middle school years. She shares that these experiences taught her how to deal with rejection, that not all things are meant to be, and not to let “no’s” bother her. She overcame being shy and is now confidently resilient and motivated to achieve her goals. With all of the no’s, she also had success landing a couple of commercials, a role in a feature film and other modeling and acting opportunities.

I asked how she has been perceived among her peers as a beauty queen. She tells me that many are interested as there is a preconceived stereotype which she does not fit. Those who are interested learn that it takes a big commitment of time and preparation to become a representative on a stage speaking in front of thousands. These skills she has learned from her pageant experiences will empower her throughout life. I found Zoe to be a young woman of grace, kindness, and determination. 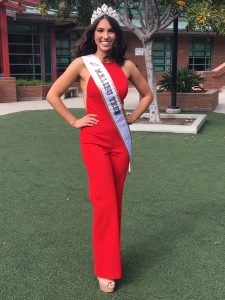 As for growing up in Coronado, Zoe feels fortunate to have had an amazing childhood in a safe, family-oriented beach town where she’s able to bike around town and share adventures with her friends. She did say that it is a bit of a bubble and she knows there is much to learn about street smarts and life outside of Coronado. Nonetheless, she feels very privileged to have been raised here by her parents, with her parents, grandmother, younger brother and their yellow lab Haley.

Zoe will spend this summer training for kayaking and at her new job as a guest relations liaison at Hotel del Coronado. She shared that she would like to see our youth put down their electronic devices and spend more time outside. She feels this is necessary to create memories that will shape them as people.