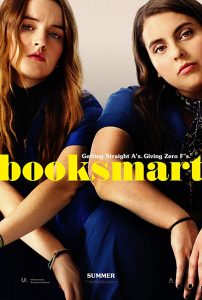 Reading the film description before seeing the movie in no way prepared me for this coming-of-age comedy. Not five minutes into Booksmart, I looked at my friend and whispered, “I am not so sure how this movie is going to go over here in Coronado…”; sixty seconds later an older couple walked out of the theater not to return. The description from the studio, below, sounds like an ordinary “haha that’s funny comedy.” What it doesn’t tell you is the movie is filled with political innuendos, more f-bombs than most films I have seen (and that’s a lot of f-bombs), and a sex scene that wasn’t necessary for the story.

What the movie did deliver was an eyes wide open view of how life is for many in high school. The efforts to fit in, to stand out and being misunderstood. It was also about the value of friendships and how solid relationships are priceless and irreplaceable. There were also a lot of laughing hysterically moments if you aren’t easily offended. I heard fellow islander and writer, Joe Ditler, who was sitting behind me with his girlfriend in law, laughing more than once.

For those who are parents of high schoolers, or younger ones who will become high schoolers soon enough, while it may not be this wild in Coronado, these situations really do happen and in some cases much worse. Be ready! Rotten Tomatoes gives Booksmart a 97% and the online audience rating is 75%. One movie reviewer dubbed Booksmart as Generation Z’s “American Graffiti.”

Academic overachievers Amy and Molly thought keeping their noses to the grindstone gave them a leg up on their high school peers. But on the eve of graduation, the best friends suddenly realize that they may have missed out on the special moments of their teenage years. Determined to make up for lost time, the girls decide to cram four years of not-to-be missed fun into one night — a chaotic adventure that no amount of book smarts could prepare them for.

Rating: R Rated R for strong sexual content and language throughout, drug use and drinking – all involving teens