Beach Access For All is a Reality in Coronado 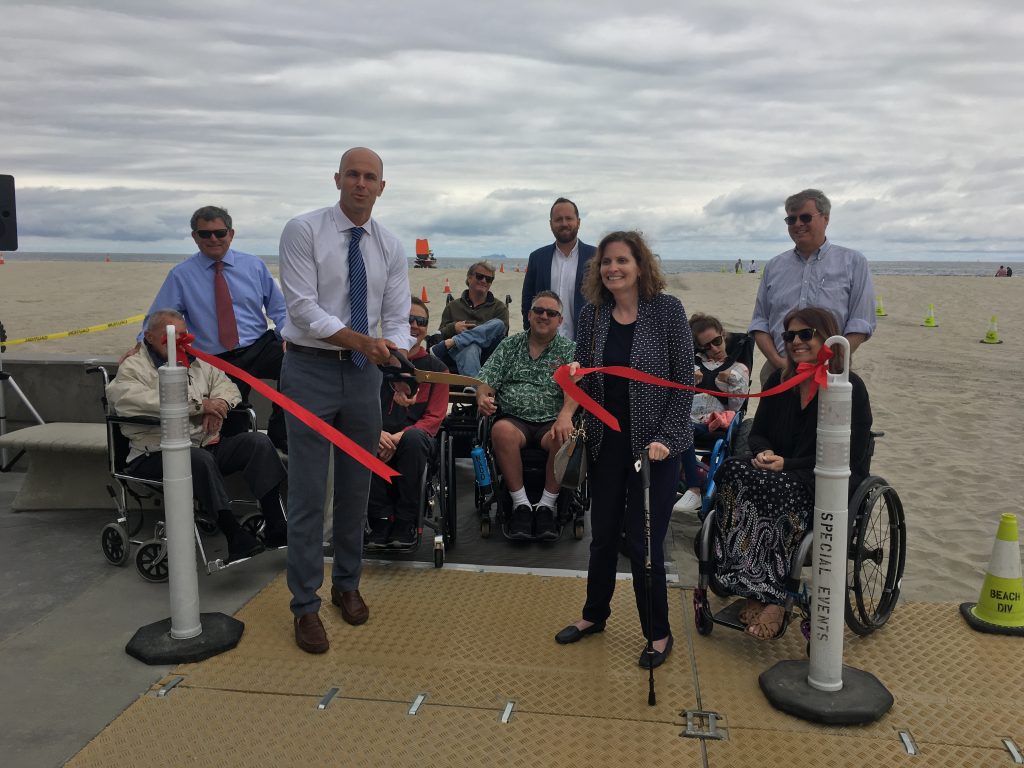 An idea which began a decade ago according to Mayor Richard Bailey became a reality on Thursday, May 9, as the ribbon was cut by him and former City Councilmember Carrie Downey at Coronado’s Central Beach. Getting on the beach and to the ocean in Coronado has now become accessible to more people, specifically people who are confined to a transport chair or wheelchair. The installation of the first of four roll-out mat systems was a success.

The discussion of beach mats at the main lifeguard tower was brought to the city council in July 2018 and on Oct 2, 2018, city council unanimously voted to support the installation of beach accessibility mats. That installation happened Thursday. In the words of Mayor Bailey, “This is one of those special projects that will bring a lot of joy to a lot of people that were previously unable to experience the beach. The entire city council is happy to see this come to fruition and we appreciate all of the input from the community and Parks Recreation committee that made this happen.” Several current city council members and City Manager, Blair King were in attendance to celebrate this special day.

Many of the residents who rallied for beach access showed up to be the first down the runway. Chelsea Fabiszak, whose mother Veleria shared that Chelsea has Rett Syndrome, has always been a beach girl. She was born in Florida and enjoyed the beach before RS stripped her of the freedom she had as a small child. While Chelsea has a very expensive sand chair that allows her to enjoy the comfort, beauty and peace of the beach and ocean, the distance to the water from the street makes it difficult. The mats will allow their family and many others the simple pleasure of accessing the beach. Veleria is also working on getting universally acceptable playground equipment on Coronado.

Others in attendance who celebrated this new freedom included Sherril Altstadt, Andy Cohn, Bill Sandke (father of Councilmember Bill Sandke), Steve Wampler and Stefan Freeman. Freeman told me “he is excited to explore things previously out of reach for wheelchair users or those with mobility challenges.” He has been in a chair for 22 years. He also credits Mayor Bailey for spearheading this important project. After the ceremony, the attendees used the mat for the first time, taking it down to the water. Steve Wampler nearly ran me over as the leader of those racing to the ocean!

The mats from AccessRec are 6 feet wide, made of polyester, and will not fray or rust. They are secured in place by 20” stakes about 6 feet apart down each side in the sand. The mats are easily movable in the event the need arises. The mat is a straight path to the edge of the hard sand where it then extends in both directions for a “T”. There is no concern over high tides damaging the mats during high tides according to Alex from AccessRec. The installation only took a couple of hours by city public services staff. In the coming days, access mats will be installed at North Beach, Dog Beach and Glorietta Bay Park Beach.

Fair warning to everyone that has new access to the beach — beach rules are posted and include “No Nudity”…  And of course motorized chairs are exempt from the “Vehicles Prohibited.” Have some new found fun!

It is expected that the mats will also be used by people with wagons and strollers; if you are not in a wheeled chair, please yield the way to people who are.

High tide occurred late last night and the beach mats came through unscathed as expected. Do take note that when they are wet from water or dew, they are slick if you are barefoot. 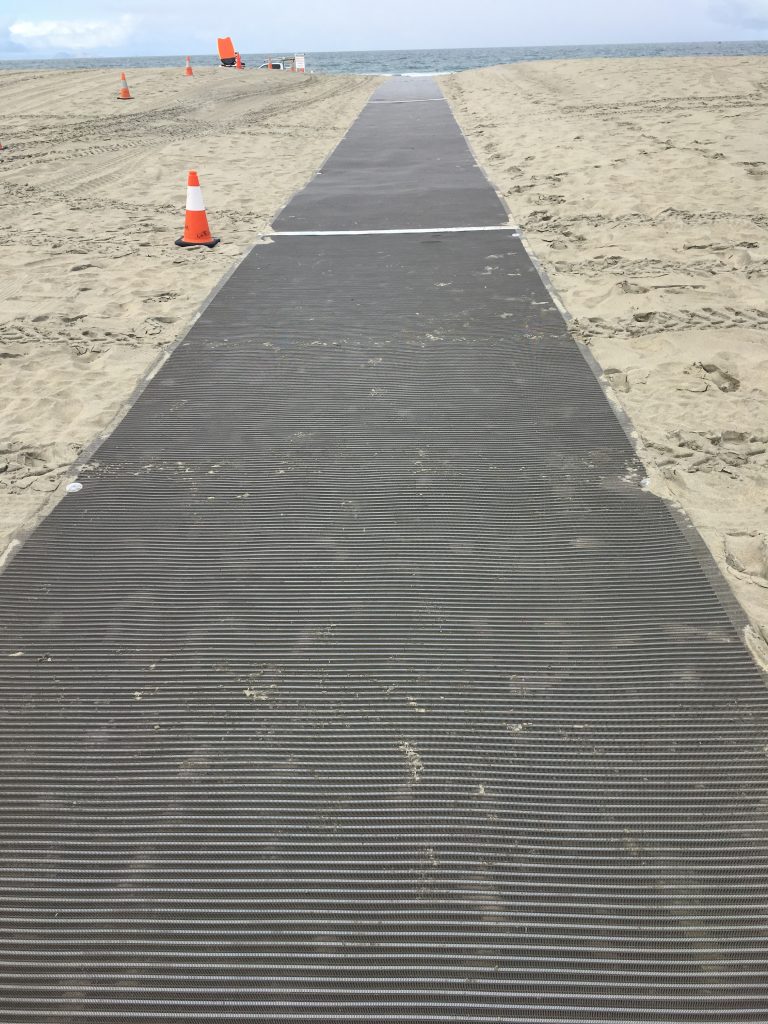