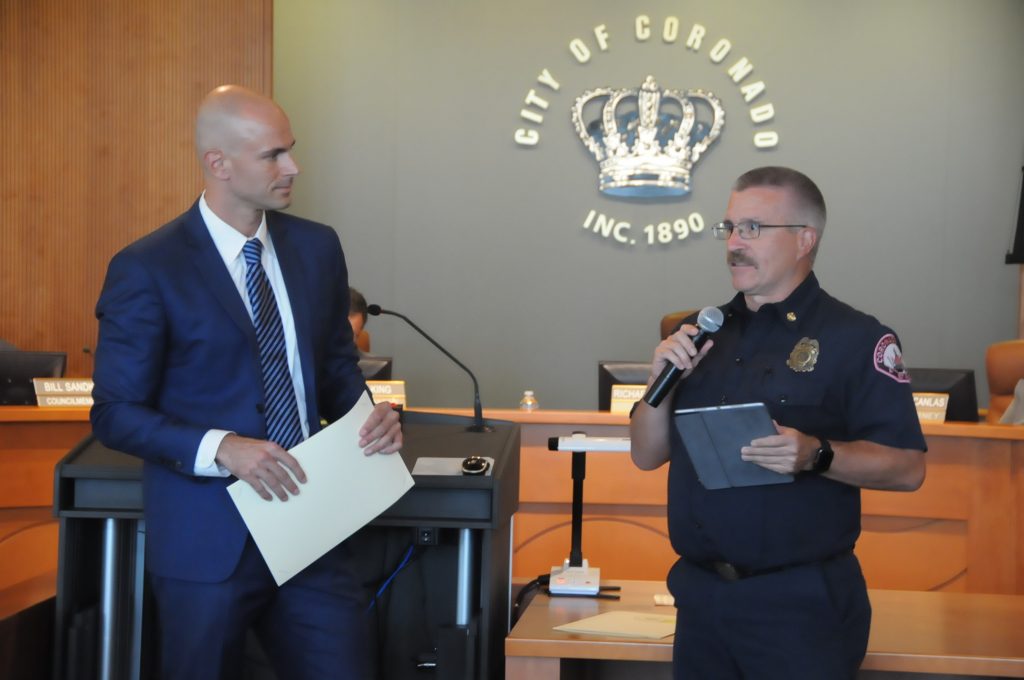 Mayor Bailey presented Fire Chief Jim Lydon with a city proclamation proclaiming October 7 through 13 as Fire Prevention Week. He invited the public to the Public Safety Open House on Sunday, October 7, from 11am to 3pm. The theme this year is ‘Look, Listen, Learn – Fire can happen anywhere.’ 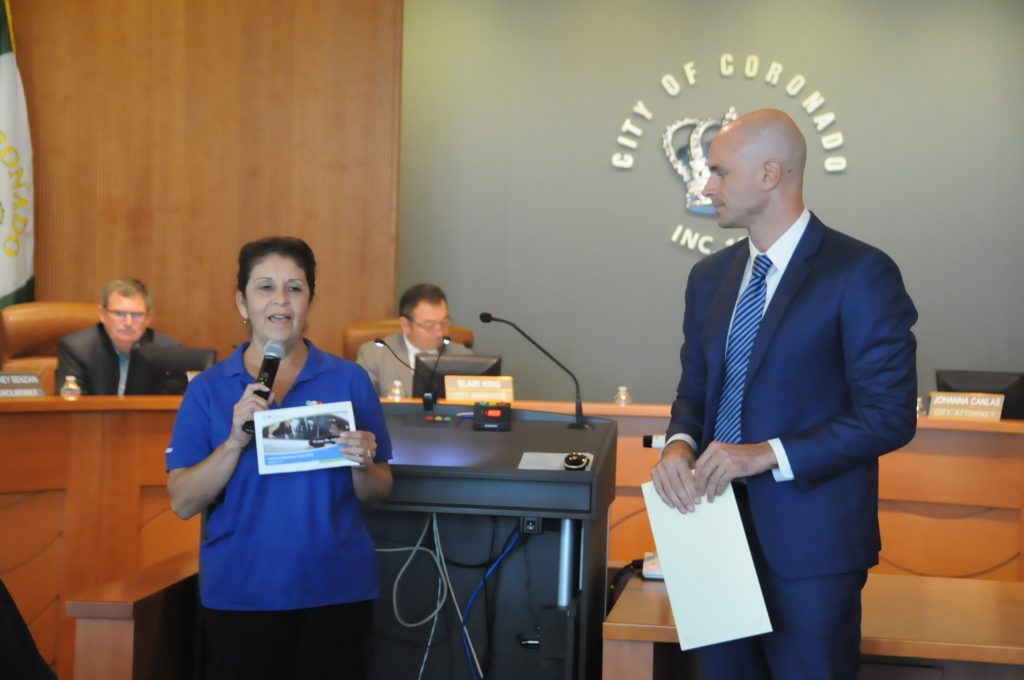 Patty Talamantes, SANDAG Account Executive, accepted a proclamation from Mayor Bailey for Rideshare Week, October 1 through 5. He mentioned that Coronado has been recognized as a Bronze Tier Diamond Award Recipient by SANDAG. She asked everyone to take the Rideshare Pledge and cited carpool, transit or vanpools as viable alternatives to driving alone.

One of the widely discussed items on the agenda was the Second and Orange Parklets Project, which is a project to enhance the bulbouts already installed at the corners of 2nd Street and Orange Avenue. The bulbouts have had the desired effect of decreasing accidents, but now to enhance the aesthetic appeal, parklets will be created, which include raised landscaping bed adn street furniture, such as café chairs and sidewalk medallions. Councilmember Benzian asked if there was any flexibility in the plan if needed in the future. City Manager Blair King said there could be some variance with the landscaping planters. Councilmember Downey verified that the height of the planters would not impede the visibility of cars. Councilmember Sandke suggested looking at other busy areas on Orange Avenue to incorporate parklets. Mayor Bailey said, “I think the items that will lead to the greatest traffic calming are some of the least expensive items of this project and some of the more expensive items won’t have as big an impact, but I certainly hope this works.” This project was approved, with a no vote from Mayor Bailey.

Tricia Olsen, Associate Planner, presented the list of 29 homes recommended by the Historic Resource Commission (HRC) that are up for consideration of Mills Act Approval.  Previously, only seven homes were designated each year, but a clearing of the list was recommended after Councilmembers Downey and Donovan made their Historical Resource Subcommittee recommendations. Staff also suggested waiving the fiscal cap of $15,000 and leave the number of homes up to the discretion of the council in future years.

There were multiple questions of foregone property tax revenue. Councilmember Sandke pointed out that only one-third of property tax comes back to the city. The fiscal impact to the City of Coronado is $91,000, with more to other agencies. The amount of lost revenue is only an estimate and exclusions could reduce the impact.

Jim Krueger, Director of Administrative Services, gave an overview of fiscal implications and answered questions. He explained that foregone revenue is an estimate and is subject to exclusions. There was a discussion regarding the impact of this monetary loss to the city with regards to paying off the bonds for the Successor Agency for the school district to get back to basic aid status in a timely manner. It is hard to project all the variables to get a definitive amount for this action, but Councilmember Downey said, “All the numbers are on the presumption that these properties would be reassessed each year, which is not necessarily the case.”

This issue resulted in two motions. The first was to approve Mills Act Designation for all 29 historic properties on the waiting list. The second was to remove the $15,000 yearly cap for Mills Act designation. After much discussion, both were unanimously approved. “There is an unspoken expectation if you receive a historic designation, you will automatically receive a Mills Act designation, but that is not the case,” commented Mayor Bailey. “With the idea of clearing the deck today, we can send a message that we can re-look at Historic Preservation. I think the benefits of Historic Preservation are numerous,“ said Councilmember Downey.

A presentation of Beach Accessibility Mats was made by Roger Miller, Director of Recreation and Golf Services. Two mats were proposed, at Central Beach and North Beach, and a third mat was added for Dog Beach. City Manager Blair King pointed out that typically these mats last between three and seven years and the council unanimously supported this motion.

The consent calendar was unanimously approved with several items removed from consent for later discussion.

Councilmember Donovan asked for more information on changing yield signs to stop signs on Prospect Place and Second and Third Avenues. Ed Walton, City Engineer, explained that it was a request from a resident to do this to help with traffic issues.

Councilmember Downey requested the adoption of a new Municipal Code to increase the allowable height of hedges to 10 feet in the rear yard overlooking an alley.

Tom DeCaro was reappointed as an incumbent member to serve a three-year term on the Street Tree Committee.

Alexander Fitzpatrick was reappointed as an incumbent member to a second, three-year term on the Bicycle Advisory Committee (BAC).

Todd Little, Discover Coronado, highlighted that they are sponsoring free shuttle service from Black Friday, November 23, through New Year’s Day that will run every 20 minutes, seven days a week. This should help encourage local shopping and reduce parking issues.

Dinah Willier, Public Affairs Manager, and Corey Mitsui, Electric Analysis and Solutions Manager, SDG&E, made a presentation about recent power outages and system reliability in Coronado. They pointed out that in general the service in Coronado is excellent. There were three outages on the Silver Strand, including the Silver Strand Elementary School and the Cays, in August, due to failed equipment. They have worked to resolve these issues. Residents are encouraged to call the Customer Contact Center at 1-800-411-7343 (SDGE) with questions and concerns.

Mayor Bailey, City Manager Blair King and Councilmember Benzian made a trip to Washington DC last week with regards to the Tijuana Sewage Issue. They met with key people, including congressmen, the Western States Caucus, US trade representatives, and the Office of Intergovernmental Affairs, which serves as a liaison between the White House and local governments. “We are cautiously optimistic as we move forward to find a solution for this problem,” said Councilmember Benzian.