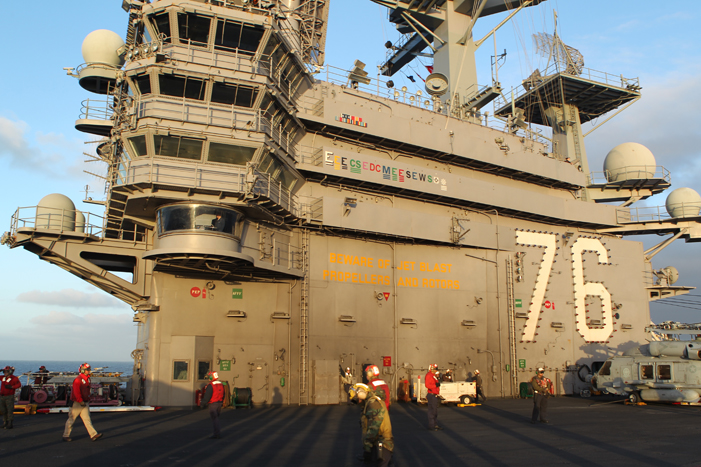 “We are sending our most modern West Coast-based aircraft carrier to support the security, stability and prosperity of the Indo-Asia-Pacific region and our allies,” said Vice Adm. Mike Shoemaker, Commander, Naval Air Forces.

Ronald Reagan, which has been a prominent part of the San Diego community for the past 11 years, was one of the first responders to assist in the aftermath of the earthquake and tsunami that devastated the east coast of Japan in 2011.

“The strong ties that were established between ship and host nation over four years ago will continue,” said Shoemaker.

Nearly two-thirds of the crew members who departed Japan aboard George Washington in May 2015 will return to the U.S. 7th Fleet area of responsibility as members of the Ronald Reagan crew.

The crew swap initiative will create geographic stability for many of the Sailors assigned to each involved aircraft carrier while providing a savings of approximately $41 million in Permanent Change of Station (PCS) costs to the Navy. Approximately two-thirds of each crew will remain in their original homeport while one-third will remain with their ship, including Reactor Department personnel and aircraft carrier Commanding Officers, Executive Officers, and Command Master Chiefs.

For a graphic illustration of the three carrier swap, visit the following website: http://www.navy.mil/management/photodb/photos/150805-N-MH885-001.JPG

“Park Under the Park” – An Unbelievable Parking Garage Under Spreckels Park

APRIL 1st NEWSParking woes. Coronado residents in need of groceries, hardware, pet food, prescriptions, a gift for a friend, or that morning coffee, are...
Read more
City of Coronado

After over a decade of leadership, Blair King announced he will depart from the City of Coronado on April 29, 2021 to accept the...
Read more