Emerald C: A place not only to buy art, but also to create it 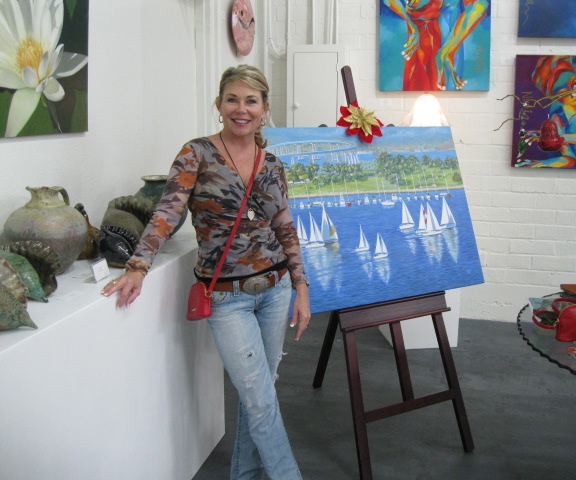 Penny Rothschild, with one of her handcrafted purses slung over her shoulder.

Scarcely before most people knew it even existed, Emerald C Gallery moved to the center of Coronado’s arts community. It opened October 4 of this year, offering fine arts and crafts, classes and exhibitions.

“It’s a place for fellowship, a place for people to come together to share, a place that gives people the freedom to be creative,” said owner Penny Rothschild.

Originally Rothschild planned to open a boutique, but there were already so many on the island. A gallery was her next thought. When she found a space tucked away behind the Brigantine in the 1300 block of Orange Ave, she realized it had potential for so much more.

The space had been a gym for over a decade. The name she chose honored that history. “It was a gym, by the sea. Now it’s a gem by the sea,” Rothschild said. With its cavernous space and high ceilings it resembled an artist loft. Not one that served an individual, but one for the whole community. First Rothschild needed art.

She was new to the galley scene and didn’t know exactly how to go about finding artists, so she placed an ad on Craigslist, contacted the Coronado Art Association and Spanish Village in Balboa Park. From there she assembled works from 35 fine artists and craftsmen.

The objects range from paintings and sculpture to jewelry and ceramic vessels to fabrics and leather goods. The styles are equally eclectic, ranging from contemporary to traditional, set at prices to meet every pocketbook.

With the exception of the Spratling Silver, all are by regional artists and craftsmen. Emerald C and the Mingai Museum Store are now the only local sources for the treasured pre-Columbian inspired jewelry created in Taxco, Mexico. 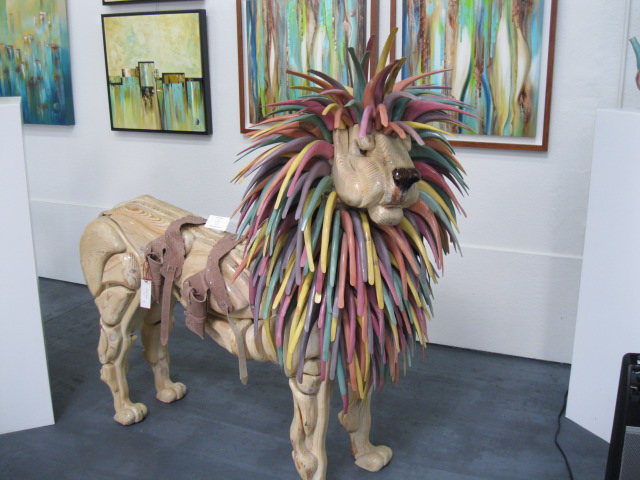 Rothschild also showcases young talent; forging an alliance with the Coronado School of the Arts (CoSA). In April, Emerald C will host the CoSA graduation. There will also be a CoSA reception on April 8 and student work will be featured for that entire month.

Addtionally, there are receptions for featured artists held each month. All are catered with an open bar. January’s featured artist will be artist B.J. Lane.

The idea for a student exhibition sprang from a conversation Rothschild had with Karrie Jackson, an artist and instructor at CoSA, whose work is also on display at Emerald C. “She came in and we started talking,” Rothschild remembers. “It all just evolved.”

This is not the first time CoSA artists have exhibited off campus. They have participated in the Mission Federal Art Walk in Little Italy, Coronado Taste of Oils and a number of community projects sponsored by the Library and the Coronado Arts Commission.

It is, however, the first time that the students have had an opportunity to deal with a gallery owner as professionals. Students will bring their portfolios to Rothschild for her to select work from, just as they would as professional artists. “This is valuable and practical experience that students can use in whatever field they pursue,” Jackson said.

Eventually, the featured student art won’t only come from CoSA. There may be a few who emerge from Emerald C itself. There are classes in various media: taught by artists with experience both as creators and instructors. Many have a teaching credential. There are no requirements or prerequisites. Anyone at any level can attend. “We’ll meet you where you are,” Rothschild said.

For those who have a yen to create, but I have no idea what medium to explore, there are demonstrations. Next month there will be one on metal jewelry; last month Spanish Village potter Paul Linsley demonstrated wheel throwing. He now teaches weekly wheel classes at the gallery.

Rothschild moved to Coronado from Tulsa, Oklahoma, seven years ago. Her son had left for college and Rothschild was ready for the next chapter in her life. During the summer vacations her family would drive down from Orange County and spend the day here. “We used to take the ferry over,” she remembers. “I always wanted to live here.”

She worked at Sharp Mesa Vista as a mental health councilor working with people diagnosed with mental illness and substance abuse after she first moved here. Art was always a part of her life.

“My mother was a painter,” she said. “I grew up creating,” she said. Currently, Emerald C sells Rothschild’s handcrafted leather handbags.

Emerald C not only celebrates visual arts, it also features music and poetry. There is an open mike every month where anyone can play an instrument, sing or recite a poem they’ve written.

While the pun on the gallery’s name was inspired by history, the name has a deeper meaning. An emerald is a gem, but many in the art community see the gallery itself as a gem.”Penny and the Emerald C crew are such a positive addition to Coronado’s art culture,” Jackson said. “They have definitely taken it up a notch.”

Coronado High School will change its bell schedule in the fall. After a contentious board meeting last month, the once-unanimous plan to shift from...
Read more
Community News

The Coronado vaccination clinic, a joint effort by the City of Coronado and Sharp HealthCare, is now accepting walk-in appointments. Priority will continue to...
Read more

At the March 6 meeting, the city council agreed to move forward with the majority of capital improvement projects proposed in the Active Transportation...
Read more
City of Coronado

After a four-hour marathon meeting on February 20 that featured a packed agenda, and the contentious issue of off-leash dog parks, the council has...
Read more