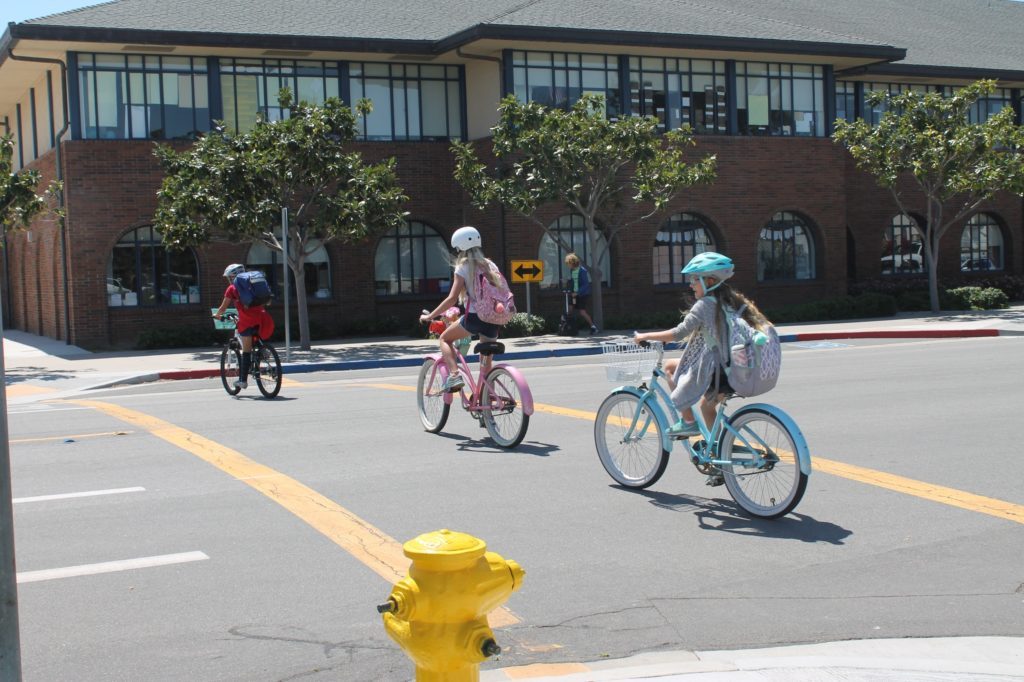 The Active Transportation Plan that will go to the city council for review sometime this spring emphasizes all forms of active transportation – walking, cycling, skating. It seems there was a general notion in many people’s minds that this was a bicycle plan. There is some truth in that notion.

For the most part, “the pedestrian environment works quite well,” said Allie Scrivener, the city’s Active Transportation Planner. “Only minor changes were needed, based on best practice.” This is not the case with the bicycling environment, so more of the planning committee team was focused on it.

Still there was a genuine effort to bring the whole community into the discussion. 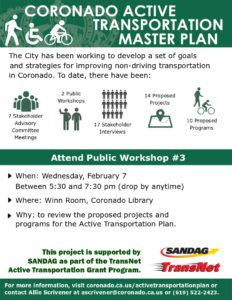 Beginning in July 2017 the planners held seven stakeholder meetings and three public workshops (the final public workshop was last Wednesday, February 7). These were advertised on the city’s website and local media (Coronado Times and Eagle-Journal and facebook’s Coronado Happenings group). The city offered tours of the affected streets. There was also an online survey to which more than 600 responded. A summary of all the comments made online and at the workshop will be available on the city’s website soon, Scrivener promises.

Residents who participated had an impact. “The idea to make the Glorietta Blvd bike path a multi-use path came from residents, as did the plan to install low-level or ground lighting on city streets,” Scrivener said. Residents also dashed plans to put sharrows on Orange Avenue.

The most dramatic response was the change made to the proposal for Isabella Avenue. After residents spoke out at public workshop in January, planners eliminated the median idea and replaced it with sharrows, curb ramps along Ocean Blvd, high visibility crosswalks and flash beacons. “We thought the residents’ objections to the median made sense,” said City Engineer Ed Walton.

Despite the community outreach, some thought more was needed. Eddie Warner took it upon herself to alert her neighbors on H Avenue and 8th Street of a plan to create greenways in intersections along both streets. Greenways calm traffic with curb extensions, medians and mini-traffic circles, along with signs and pavement markings.

Flyers describing the proposal were left at every home on those streets. It brought out several people who hadn’t been involved before. “I had no idea this was happening,” said Jean McGowan. “I don’t like it.”

Others did like the idea. “The team received positive input about the greenway project and where to put them,” Scrivener said.

A cyclist and former bike shop owner, Warner has long been an opponent of infrastructure as a way to protect cyclists. A recent study published by the American Journal of Public Health and an earlier study by the National Institutes of Health said bike lanes were not that effective in preventing accidents.

While the data is not conclusive, most communities throughout California are using infrastructure to make it safer to cycle. San Diego already has an extensive network of bike lanes, sharrows and high visibility sidewalks.

The Active Transportation Draft Plan has a number of bike lane and bike sharing proposals. Warner thinks this is a mistake. “There needs to be a shift from build and paint to education and enforce.”

The proposed plan does include educational proposals, but Warner thinks more are required. “Education needs to be more than a bike rodeo at the school once a year. It needs to be aimed at adults as well as kids. We need to reach out week after week after week to build a respectful and sharing culture.”

Planners hope to have a draft to the city council sometime in March, with a final report to follow. Not all components will go into effect immediately. Educational ones are inexpensive and can be funded by grants. Most can be acted on in short order. Infrastructure projects are capital improvements that are funded by the city. These will be placed on a schedule based on needs and funds available. Each project must be approved by the city council before moving forward.

Those residents who objected to the greenways on along H Avenue and 8th Street will have many opportunities to have their voices heard as will other members of the community who object to specific proposals as they learn about them.

At the March 6 meeting, the city council agreed to move forward with the majority of capital improvement projects proposed in the Active Transportation...
Read more
City of Coronado

After a four-hour marathon meeting on February 20 that featured a packed agenda, and the contentious issue of off-leash dog parks, the council has...
Read more
Advertisement
Sponsored Partner Links