At the March 6 meeting, the city council agreed to move forward with the majority of capital improvement projects proposed in the Active Transportation Plan (ATP). These are big ticket items that require paint, concrete and an environmental review. The vote was 5-0. All educational programs such as bicycling and pedestrian safety courses in the ATP were approved by consensus.

It was clear from the discussion that not everyone was on board with all of the projects. Mayor Richard Bailey and Councilman Mike Donovan questioned the need for a plan in the first place. “We’re bicycle friendly already,” Donovan said. “People can get from A to B if they just follow the rules.”

Bailey reminded people that the bicycle masterplan approved without a full vetting of the individual infastructure projects. The feasibility study for a multi-use path on Ocean Blvd and striping city streets with sharrows generated a torrent of opposition when the council proposed implementing them. “It feels like Groundhog Day,” he said of the ATP.

Other council members were open to aspects of the plan, but none were ready to green light any project without further study or modifications. These included neighborhood greenways along C (6th to 10th), H Avenue (1st to 10th) and Eighth Street (Alameda to C), bike lanes on Tenth, Alameda and Pomona, and curb extensions and pocket parks on Isabella. 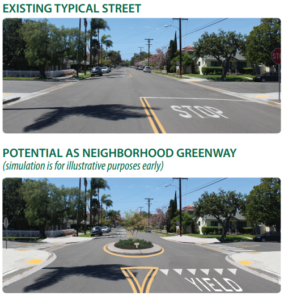 Councilman Bill Sandke liked the idea of greenways or mini roundabouts to calm traffic, for example, but wanted to see the plan modified in some way. The active transportation planners couldn’t offer any without further study. Sandke voted to keep the greenways to allow them to do exactly that.

Two projects were rejected outright. The council saw no need to replace the two-side bike path on Glorietta with a single multi-use path on the golf course side. It also saw little merit in counting bicycle and pedestrian traffic.

Two projects were added: Safety improvements for the intersections along Palm and Olive, and on A Avenue at First and Second streets. “The site lines are obstructive,” Bailey said. “We’ve done nothing to improve the visibility of those intersections.” The council also asked the staff to evaluate whether an elevated crosswalk along Ocean Boulevard made sense.

Based on these directions from the council, the active transportation planners will develop a draft plan and present it to the council in the near future.

Extension of the Decal Parking Suspension

The suspension of decal parking on streets adjacent to, and near, Naval Air Station North Island will continue until June. The vote was 4-1 with Bailey voting no.

The 12-month trial was first proposed by Donovan because changing conditions made permit parking unnecessary. The Navy had relaxed its regulations for vehicles coming on base and added 203 parking spaces in front of the Third Street gate and 111 parking spaces adjacent to the First Street gate. Both lots are under utilized.

A survey of parking space available on the nearby streets before and after the signs were removed showed no change in the number of spaces available. Residents living near NASNI challenged the survey’s findings. Some residents say that the loss of decal parking had made it virtually impossible for anyone to park near their homes.

When the signs came down, Navy personnel began parking on residential streets and were joined by construction and commercial vehicles. Many of these vehicles are exceeding the 72-hour parking limit, several residents reported.

Before jettisoning the trial based on these accounts, Donovan suggested taking a few extra months to find out why Navy personal, who cannot park on base, would choose to park on residential streets, some several blocks away, instead of in nearly empty parking lots abutting the First and Third Street gates.