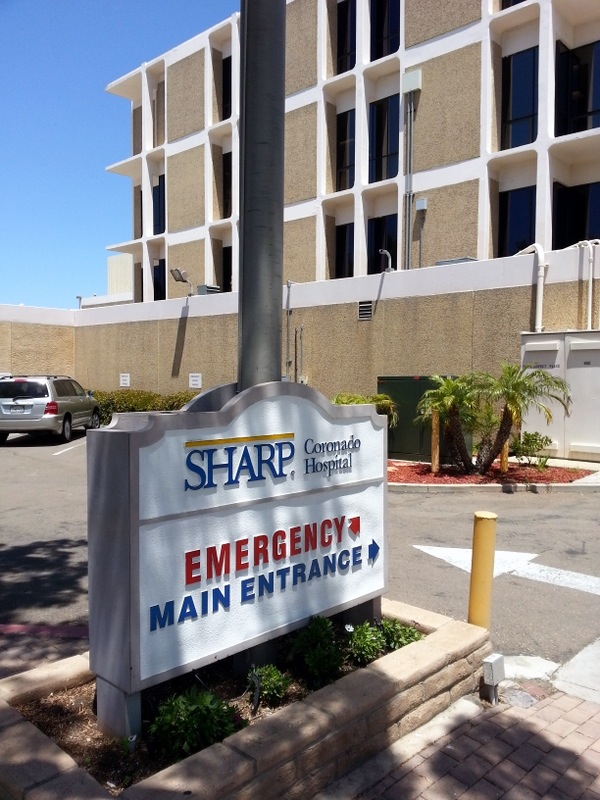 Like most hospitals, Sharp Coronado occasionally has medical supplies and equipment that are due for replacement of upgrading, yet are still usable. Sadly in the past most of it went to the dump, but thanks to the efforts of two women  Renee Huslin and Laura Luxemburg — that is changing. Huslin and Luxemburg are working to ensure that discarded but viable medical supplies from Sharp Coronado Hospital will be sent to health facilities in impoverished parts of the world. 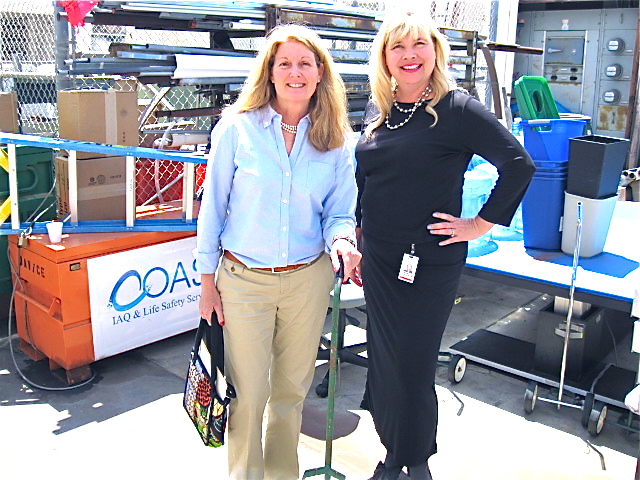 Huslin is the Sharp HealthCare Sustainability Officer for Waste Management. Luxemburg heads Ssubi Foundation www.ssubihut.org, a non-profit that collectings medical supplies and equipment for a Ugandan hospital. The two women met a little over a month ago, and in just a few weeks they had forged an agreement to donate Sharp Coronado’s unusable equipment. Luxemburg and her son, Baron, made their first trip to Coronado to haul away the hospital’s unusable medical equipment and supplies just a few weeks after the ink dried on the agreement.

The first collection trip was a bit of a scramble. Sharp Coronado’s spring-cleaning was already underway and unusable items were already in a dumpster the hospital had ordered months before. “I tried to cancel the dumpster, but was too late,” said Huslin. “We had to do some dumpster diving to recover equipment that could be donated.” Despite the rush, they retrieved over a ton of items, including a shower gurney, walkers, oxygen tanks, I.V poles, surgical masks and catheters. 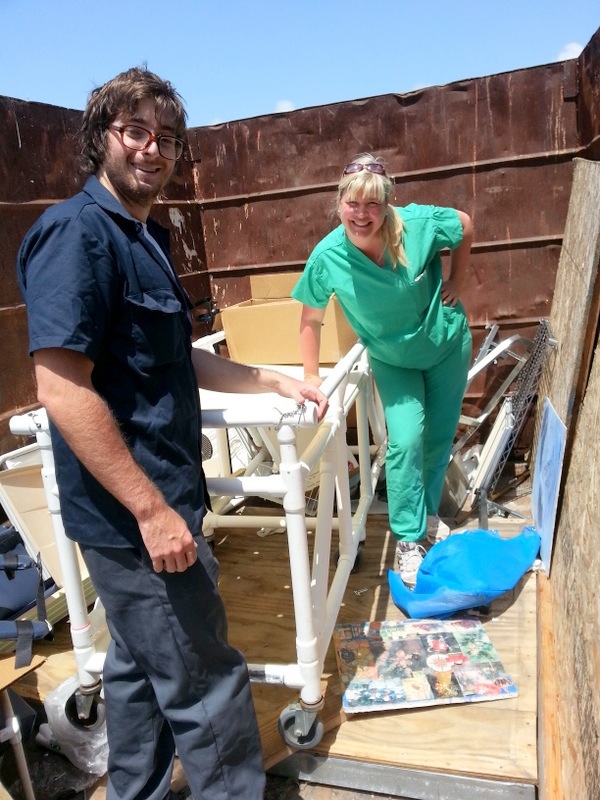 Huslin plans to have a full program up and running in the near future that will include regular pickups and designated bins in certain units. Many of these items will go to The Bishop Asili Medical Center in Luwero, Uganda. It a rural hospital run by seven nuns that delivers care to more than 660,000 people living in 49 near by villages. The center is also major test center for AIDS in Africa. It has the continent’s only CD4 analyzer. “People come from all over Uganda to be tested,” Luxemburg said. And while Catholic nuns run the hospital it isn’t religious based. “They help everyone, Christians and Muslims alike,” she added.

Once the program is established in Coronado, it will expand to other Sharp facilities, starting with the hospitals and moving onto the clinics. Both Huslin and Luxemburg emphasize that there is nothing wrong with the discarded material; rather, due to U.S. laws and regulations, medical equipment cannot be used if it has passed its expiration date or doesn’t meet specific requirements or standards, Huslin explained. For example, Luxemburg picked up some oxygen carts that had rust on them. “Because of the rust we can’t use them,” Huslin said. Luxemburg has someone who can remove the rust and repaint them.

All medical equipment, such as gloves and needles, has expiration dates. Under federal law they cannot be used “because we can’t guarantee the integrity of the material,” Huslin explained. However, as a result, “there is so much waste,” Luxemburg said. For example, it is not uncommon for a surgeon to open a surgical pack, removed the required supplies, and throw away the remainder. Because the pack had been opened, the unused items cannot be used. In the past, those items would have ended up in a landfill.

A self-described soccer mom, Luxemburg wanted “to a make a difference in the world.” She also wanted to be involved with “something she could get her hands on a see what was being done.” A trip to Uganda and a visit to the medical clinic in Luwergo gave her a way. “When I asked Sister Ernestine [head of the hospital] to give me a list of what they needed, she brought out a well-worn medical supply catalog,” she said. 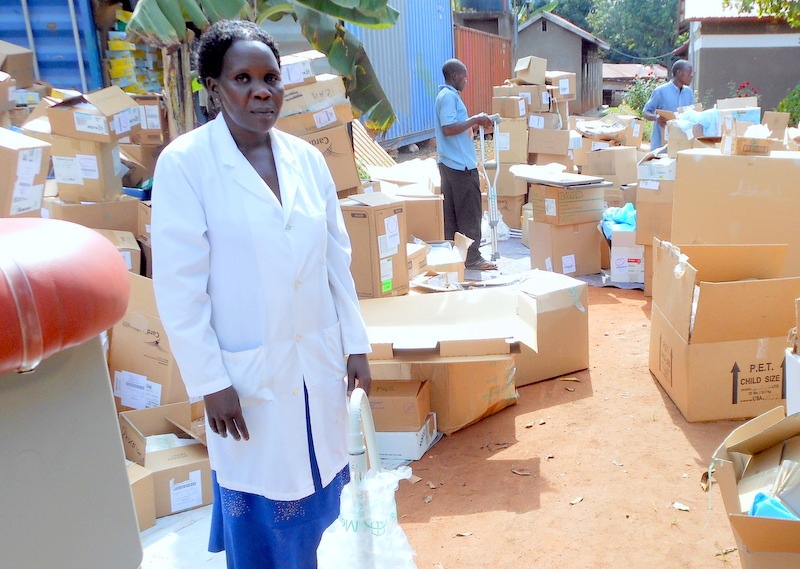 Sister Ernestine standing next to boxes of donated supplies from U.S. hospitals

To help meet those needs, Luxemburg joined forces with MedShare, a nonprofit that sends donated medical supplies to hospitals and clinics in over 90 countries. “The supplies that we collect are actually sent all over the world to needy health facilities,” Luxemburg explained. Items collected are placed on an inventory list. Health workers at centers select items they need.

The hospital is not the Ssubi Foundation’s only project in the village. “I’m also interested in the sustainability side of the equation,” she said. “It’s not enough to give equipment. You find a way to change people’s lives now and in the future.” To do that, she established a range of enterprises including a piggery, grocery store, an organic farm, a sewing and beading program, with all the proceeds going back to benefit the health center and patients. There is even a Ssubi Bank. All these are supported through monetary donations. 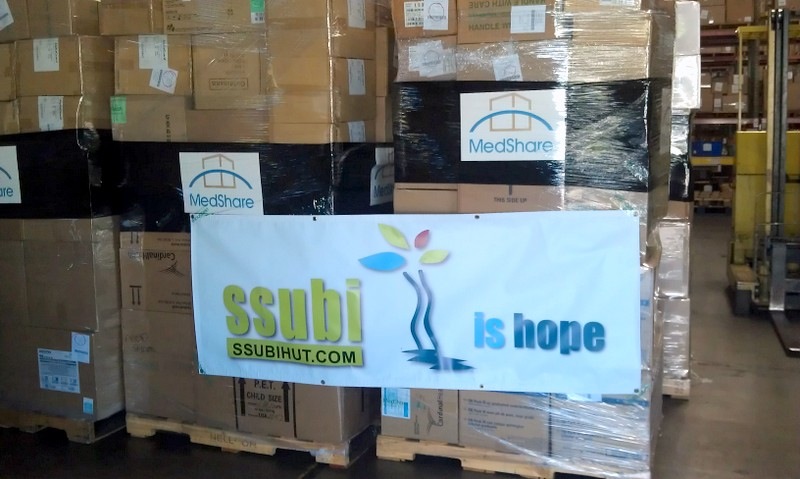 The donor program got off the ground in this March when the VA Hospital in La Jolla joined. It now has weekly pickups and donor bins in the surgical wards, according to Luxemburg. Sharp Coronado was the first Sharp hospital to participate.

Recycling and waste reduction is not new for Sharp Health Care. In 2013, the facility was named Recycler of the Year, an honor they also received in 2012. “We’re already doing a good job, but this takes it to a new level,” Huslin said. “We are diverting waste from our local landfills and by our donations helping the less fortunate in other parts of the world.”