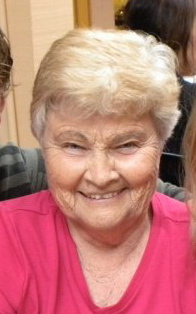 Geraldine Rose Starke (affectionately known as Jerry) passed away peacefully at the age of 83 on December 12, 2012.

Jerry was born in El Reno, Oklahoma on June 29, 1929. She moved to Coronado, CA in 1946 and graduated from Coronado High School in 1947. One of her major accomplishments was attending school with perfect attendance K-12th grade. Jerry was well known to Coronado residents as the Avon lady for several years. She also worked for the Coronado Journal Newspaper as a bookkeeper, manager for the Coronado Cays Yacht Club, and operated the soda fountain at the Coronado Pharmacy Jerry retired from the City of Coronado as a Clerk Typist with the Public Works Department. However, her most treasured job was taking care of her children and grandchildren.

Jerry loved to sit on her porch in the warm sunshine and read. She took pride in the beautiful flowers she cultivated in her garden. She lived her life for her family.

A Celebration of her life will be held on Saturday, December 22nd 1pm at St. Paul’s United Methodist Church in Coronado. In lieu of flowers, the family requests that donations be made to Coronado School of the Arts because one of her favorite activities was attending shows.