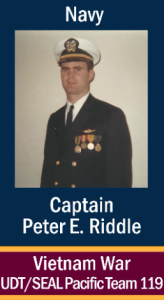 Peter “Pete” Emmons Riddle was born in Chicago on April 2, 1938, the youngest of three boys to Hugh and Katherine Riddle. He was an outgoing student leader and athlete who earned the title of most likely to succeed from his Highland Park High School senior class.  Riddle went on to play football at Yale where he was also a member of the Naval Reserve Officers Training Corps unit.

After graduation in 1960, Riddle was assigned to a destroyer, but soon became interested in Underwater Demolition Teams, or UDT, and made his way out to Coronado, California, to be a part of UDT-Class 28. After graduating in July 1962, he was assigned as a platoon officer at UDT-12. After completion of active duty, Riddle attended the University of Chicago Law School graduating in 1966.

With the Vietnam War heating up, Riddle put his legal career on hold and was deployed to Danang as officer in charge of SEALs assigned to Naval Advisory Detachment MACV-SOG, then engaged in classified special operations throughout Vietnam for which the detachment was later awarded the U.S. Presidential Unit Citation. Riddle’s superiors at the time wrote of his exceptional professionalism, competence and determination and his exemplary ethics.

After the war, Riddle continued to serve in the Naval Reserve including assignments in UDT/SEAL Pacific Team 119 and Naval Special Warfare Group 1. He retired as a captain.

Riddle started a private law practice in San Diego, served on the Coronado City Council in the early 1970s, and raised a family in Coronado.  He was appointed to the bench in 1987 where his assignments in San Diego Superior Court included probate, civil litigation, juvenile delinquency and dependency. Public service was an important part of his life.

CAPT Riddle was not only an outstanding naval officer, attorney and judge, but the most wonderful and devoted husband, father, grandfather and friend.