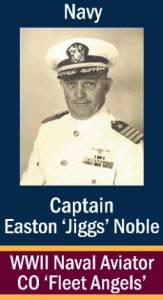 Easton “Jiggs” Boville Noble was born in Los Angeles on Oct. 29, 1903, to William and Blanche (Boville) Noble. After graduating from Hollywood High School and the University of Southern California with a bachelor’s degree in civil engineering, he was employed by Bach Aircraft in Van Nuys, California, and Warner Brothers Studio. In 1930, he enlisted in the U.S. Naval Reserve and in 1931 was designated a naval aviator and commissioned an ensign in the U.S. Naval Reserve.

Following service with Fighting Squadron 6B aboard USS Saratoga (CV 3), he returned to reserve status in 1932. For the next three years, Noble was a commercial pilot flying passengers and cargo across desolate areas of Colombia and Mexico. Returning to the United States in 1936, he performed in an aerial stunt team called the “Hollywood Trio.” Recalled to active duty in 1937, he served as a flight instructor in Long Beach, California, before reassignment as a flight instructor in Naval Air Stations Pensacola and Jacksonville in Florida.

Noble served aboard USS Lexington (CV 2) until the ship sunk in 1942 during the Battle of the Coral Sea. Transferred to Northwest Sea Frontier Command, he assisted in the fitting out of USS Breton (CVE 23) and in 1944 of USS Saginaw Bay (CVE 83). He assumed duties as Saginaw’s air officer and then executive officer.

Upon retirement, CAPT Noble and his family returned to their family home in Coronado. In spite of being stricken with polio, he spent much of his time working at the golf course, driving around in his golf cart and being a friend to all.