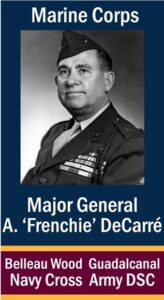 Major General Alphonse “Frenchie” DeCarré was born on November 15, 1892, in Washington, D.C. He entered the Marine Corps and was commissioned Second Lieutenant, serial number 0-230, on his 21st birthday.

In June 1915, DeCarré joined 2nd Marine Regiment, and sailed for Port-au-Prince, Haiti. There, he clashed with Haitian rebels and was promoted to First Lieutenant. He was decorated with the Haitian Medal of Honour and Haitian Distinguished Service Medal.

At the start of World War I, Capt. DeCarré was transferred to the 5th Marine Regiment as commanding officer of Headquarters Company. DeCarré arrived in France in July 1917 and went to the trenches in the Verdun Sector from March to May of 1918.

During the Battle of Belleau Wood in June 1918, Capt. DeCarré commanded a small detachment in the rear of the attacking battalion. He continued forward after the advance battalion had changed direction. Shortly, he encountered deadly machine gun fire but pressed on, alone, capturing two guns. He then brought up his detachment of only six men and captured a machine gun company of 169 Germans.

For his effort, DeCarré was decorated with the Army Distinguished Service Cross and Navy Cross. Subsequently, he participated in the Aisne-Marne Offensive, Battle of Château-Thierry and the Battle of Soissons. He was then promoted to Major in September 1918, and appointed operations and intelligence officer of 5th Marines. DeCarré served in this capacity during the Battle of Blanc Mont Ridge and was decorated with the Silver Star Citation for gallantry in action on October 9, 1918.

DeCarré then served at Camp Pendleton and Quantico. He retired in June 1946 as a Major General. After retirement, he moved to Coronado with his wife Mildred and daughter Patricia. He passed away in 1977 and is buried at Fort Rosecrans.