Saturday morning, May 7th at 10 AM, the Coronado Island Film Festival (CIFF) presents On the Waterfront, the seventh film in The Student Classic Film Series. 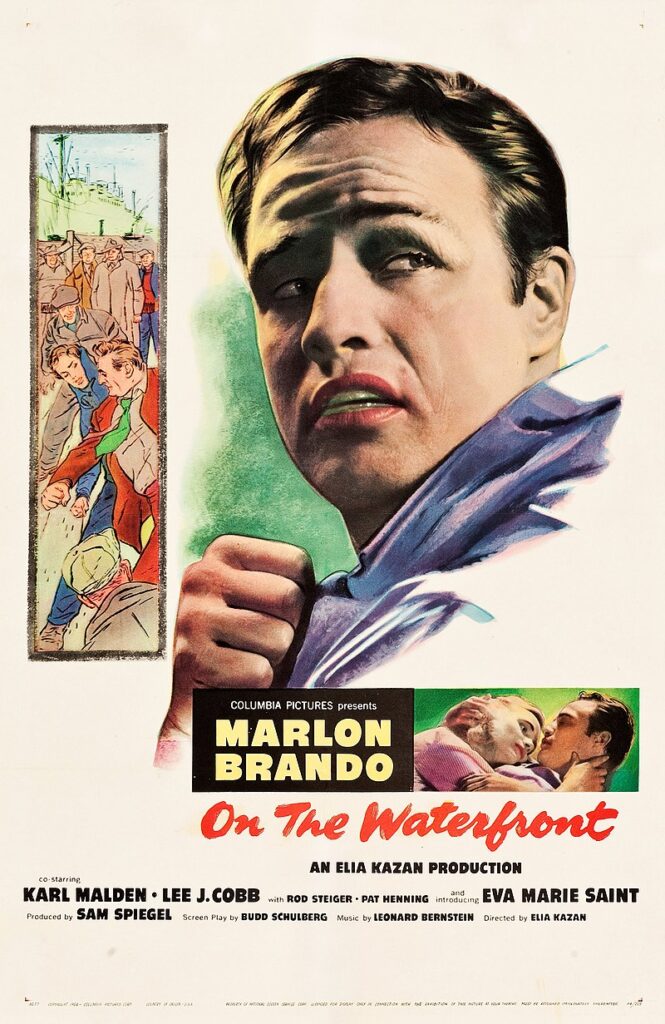 Nearly 70 years after its 1954 release, Elia Kazan’s On the Waterfront remains one of the greatest motion pictures in US cinema history. After replacing Arthur Miller on the project, Budd Schulberg wrote his Oscar winning screenplay based on Malcolm Johnson’s Pulitzer Prize winning 24 article investigative reporting series in The New York Sun entitled “Crime on the Waterfront.” In that series, Johnson unflinchingly recounted his experience investigating the case of real-life, whistle-blowing longshoreman, Anthony DiVincenzo, upon whom Marlon Brando’s character of Terry Malloy was based.

Shot entirely on location in Hoboken, New Jersey, in just 36 days, “On the Waterfront” is a triumph of the filmmaker’s art. Nominated for twelve Academy Awards, the film was awarded eight, including Best Picture. Perhaps most notably, the acting performances in Kazan’s movie stand as exemplars of the enormous power of talented, fearless actors to tell a gripping, realistic story in a way that grabs the audience emotionally from the opening titles and never lets them go until final credits roll. Astonishingly, five actors in the film were Oscar nominated for their roles: Marlon Brando, Eva Marie Saint, Rod Steiger, Karl Malden and Lee J. Cobb; with Brando recognized with his first Best Actor Oscar and Eva Marie Saint awarded the Best Supporting Actress Oscar in her extraordinary film debut. All the principal players had honed their craft at the Actor’s Studio that Elia Kazan co-founded in 1947 with New York theater colleagues.

The Student Classic Series is open to all public and private high school and middle school students and homeschoolers in those age groups. To see the remaining schedule and purchase tickets visit: www.coronadofilmfest.com. The morning of the show only, as seating permits, a special “cash only” seating section is normally made available for parents or youth leaders who would enjoy attending with the students.

The May 7th Student Classic Film Study Series screening of “On the Waterfront” and post-screening discussion begins at 10 am and ends at 1 pm at the Village Theatre, 820 Orange Avenue. Admission includes a small popcorn and drink! Program scholarships are available and confidential; email [email protected]. We invite you to follow us on Instagram @coronadostudentclassicfilms.

The Coronado Island Film Festival (CIFF) is a 501 (c)(3) charitable corporation in good standing whose mission is to welcome makers and lovers of film from all over the world to the storied seaside village of Coronado, California to celebrate the magical art of visual storytelling. Coronado’s enduring love affair with Hollywood began more than a century ago at the iconic Hotel del Coronado, our festival’s Presenting Sponsor. Launched in 2016, CIFF quickly established itself as a unique, walkable, destination film festival. Through year-round events and screenings, Q & A’s, workshops, live performances, informative panels, celebrity tributes, and awards presented by juries of respected industry pros, the festival continues to attract filmmakers at every level of their craft, celebrities, and various industry notables who come to experience the best of independent, studio and student films in an intimate and welcoming environment.