Ninety-seven-year-old Imperial Beach resident and Marine Corps veteran Bill Swanson got quite the surprise recently when he learned that the wartime memoir he wrote decades ago is going to be published. The book, The View from my Foxhole: A Marine Private’s World War II Combat Experience, from Guadalcanal to Iwo Jima will be published in November by Permuted Press, an imprint of Post Hill Press. 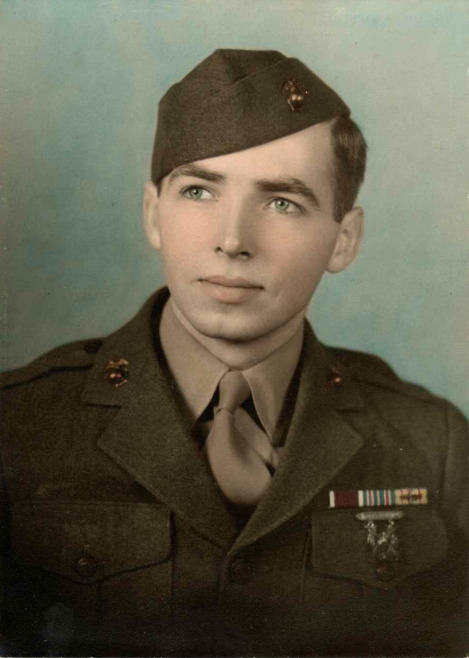 Bill enlisted in the Marine Corps in September 1942 a few weeks after his eighteenth birthday. He was placed in the Second Platoon, C Company of the Ninth Marine Regiment, part of the overall Third Marine Division. He went to scout and sniper school at Camp Pendleton.

His regiment departed San Diego from the Broadway Pier, and thus began a journey that would take him and his fellow Marines first to New Zealand then Guadalcanal and then on to the invasions of Bougainville in the Solomon Islands, Guam in the Marianas, and finally the Volcanic Island of Iwo Jima near Japan. Though wounded on Iwo Jima, Bill was lucky enough to survive and eventually share his memories and experiences in writing, many years later.

After the war, Bill met his future wife, Rita Dolores Rockefeller and they wed in 1949. Bill retired in 1986 and finally found the time to reflect and memorialize his wartime experience. He mainly intended the book for family and friends and wanted to document the day-to-day life of Marine riflemen along with the fear, misery, and disease they endured during the war. He never intended it for publication yet most who read thought it to be a very well written first-hand account. Still, the manuscript sat for many years.

Rita Swanson passed away a few years ago and Bill eventually sold their house and bought a condo in Imperial Beach close to his son Jim and wife Joanne. During the move, the book surfaced again yet no one in the family knew how to get it to a publisher. Enter Joanne’s son Jahn. Jahn and his wife Shelly and children live on a farm in south-central Virginia. Jahn is also a UPS driver. They were visiting IB last summer and staying at Bill’s condo. Jahn read and liked the book and said he had a friend and customer on his route in Virginia who is a literary agent and asked if he could show the book to her. Thus began the book’s journey to Virginia. Jahn handed the book to his friend Lisa Hagan of Lisa Hagan Literary.

Lisa read it and reached out to Alex Novak, an editor with Tennessee-based Post Hill Press, who expressed interest in reading the manuscript. So, Lisa told Jahn who texted his mother that there was interest in the book from a publisher and asked if an electronic version could be sent as they didn’t want to destroy the original. Well, Bill loves Deb’s Cookie Jar’s oatmeal raisin cookies, and the family knew that Deb’s husband Steve runs IB Printing next door, so a quick trip was made for some cookies and a professional scan of the original manuscript which was promptly emailed to Jahn who passed it on to Lisa, who sent it to Alex Novak. 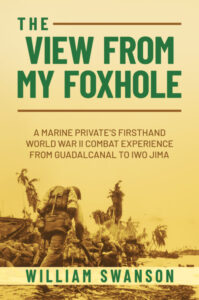 Novak immediately appreciated the you-are-there jungle warfare scenes, but also the gut-wrenching physical and psychological pressures inflicted on men in battle that comes through Swanson’s narrative.

A few days later a contract offer to publish the book was received and then an advance royalty check. So, for Bill, it is official, he is going to be a published author. The book will come out this November. As an eternal optimist Bill is reflective about his newfound success. “I’ve always looked at my life as a series of adventures and this is going to be another adventure.”  A book signing at Bay Books in the fall? “Well, that would be icing on the cake.”