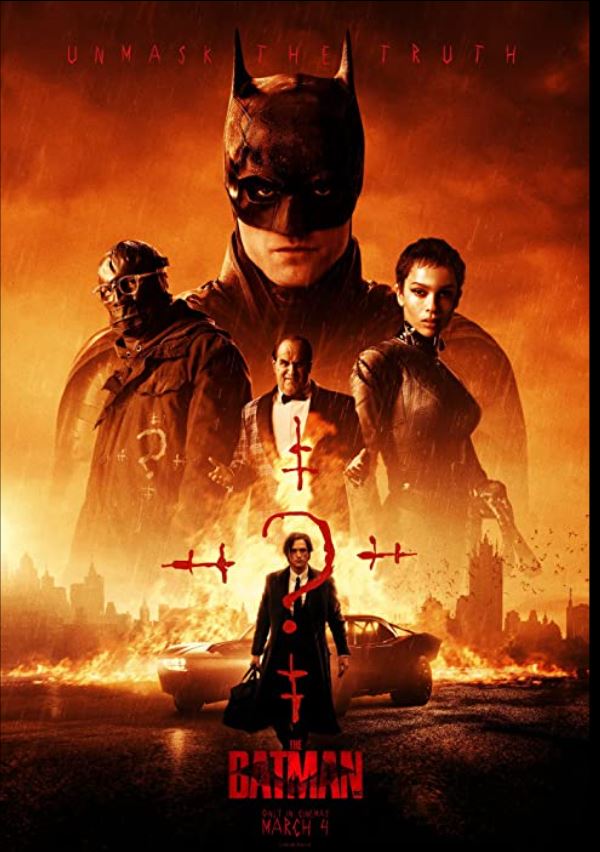 To preface this review, my husband and I don’t get out much. We have a 17 month old and I am 8 months pregnant with our second… But, when I saw that The Batman was playing for another week at Village Theatre, I took it as a sign that I had to get back in movie review game and check it out! Let me tell you, it did not disappoint.

To begin, this dark dismal film gives all the creepy vibes. Robert Pattinson starts out his version of Batman like an emo teenager writing in his journal, “Thursday, October 31st. What is the meaning of life?” Okay, not sure that’s his exact line, but pretty darn close. He then explores the town, during a rain storm, dressed head to toe in black, calling himself “hidden in chaos.” That, I did write down as the exact line. I’m getting serious “You” vibes from the serial killer series with Penn Badgley.

The ominous music sets the tone, as Batman begins his hunt for good. The dark wardrobe for the entire cast has me feeling like I stepped into the Disney Haunted Mansion. Batman arrives on the murder scene where Jeffrey Wright comes in as Batman’s ally, Lt. James Gordon. Psst… If you think you’ve heard of Jeffrey Wright before, it may be from my last movie review No Time to Die in which he is a prominent supporting character. It may also be because he was in The Hunger Games franchise. What all these films could tell you is that Jeffrey Wright is a sucker for a film that’s over three hours.

Back to The Batman. The murder investigation starts with a dead mayor and a cryptic riddle. Now, I thought The Joker was Batman’s nemesis, but for this one it is the Riddler. Sharpen those minds going in, and see if you are able to solve any of the riddles before Batman. I was not.

Although the Joker is not the resident bad guy this film, there are plenty of jokes to be made throughout the film. Such as someone commenting to Batman, “this must be your favorite night of the year. Happy F*ing Halloween.” There are chuckles throughout the film, and for such a heavy storyline the bit of comedic relief is appreciated. Most of it comes from the way Bruce Wayne is treated when he is in his Batman attire versus when he is dressed in street clothes as an emo Bruce Wayne. Also, heavy on the eyeliner. You could have told me he was from My Chemical Romance and I would have believed you.

Batman takes us back to his lair, i.e. The Bat Cave. The Bat Cave has advanced technology, a live-in butler (I think), and a bunch of bats. Shocking, I know. Here he does some of his best plotting and planning to solve the most recent riddle. Thankfully, he does not get far into his mission, before he meets Catwoman (Zoë Kravitz) who is an icon. If Catwoman and Batman met as their day personalities, emo Bruce Wayne would not stand a chance. Luckily for Batman though, she wants to team up to help find her missing friend.

The story goes on through multiple riddles, some Saw-esque scenes that may give you nightmares, a hint of attraction, and a jail friendship that sets up nicely for a sequel. One thing is for sure, I would not want to live in Gotham. My husband Greg shared, “It was a good detective story, more of how the Batman comics were back in the day.” As someone skeptical that any movie needs to be three hours, I thought this film did good sticking with one plot throughout compared to some other films that feel like they have multiple storylines going just to eat up time. I thought Robert Pattinson was a great batman and this film really shook him out of Twilight where he has spent a decade pigeonholed.