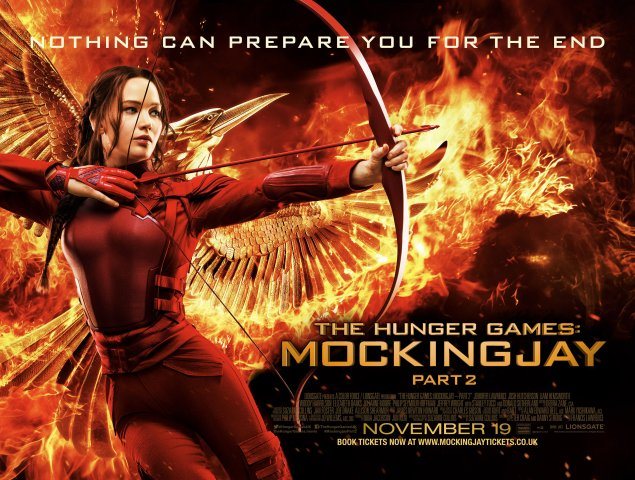 The second part of the final installment of The Hunger Games Trilogy has hit Village Theatre, and it does not disappoint. Fans have been eagerly waiting since last November to see what happens after Peeta’s rescue from the Capitol.

The Hunger Games: Mockingjay Part 2 is not for the faint of heart. It is a wild emotional roller coaster from the beginning that refuses to slow down. The first scene shared between Peeta Mellark (played by Josh Hutcherson) and Katniss Everdeen (played by Jennifer Lawrence) leaves goosebumps on the skin and a heavy heart. As Katniss wrestles with her own emotions and the pressure of being the Mockingjay, the entire population of Panem is at war – and many fan favorites will not survive it.

From beginning to end, director Francis Lawrence keeps audiences guessing; even fans who read the trilogy. Moviegoer Megan says, “As someone who read the books, I think they did a good job making sure that all of the important parts stayed in the movie while changing a few small things so I still felt like I was watching something new.”

In the battle of good versus evil, no extremity is spared. The Game Makers have left a mess of surprises to stop anyone who gets close to the Capitol. Buildings crumble, waves of tar descend, vicious mutts attack, parachutes explode. Will Katniss choose Peeta or Gale? (Will it matter?) Will President Snow continue to reign? Will Effie surprise the audience with more eccentric outfits? Nothing can prepare you for the end. Grab some popcorn and a hand to hold as you make your way to Village to see for yourself the conclusion of this world wide phenomenon.

Rating: PG-13 (for intense sequences of violence and action, and for some thematic materials)