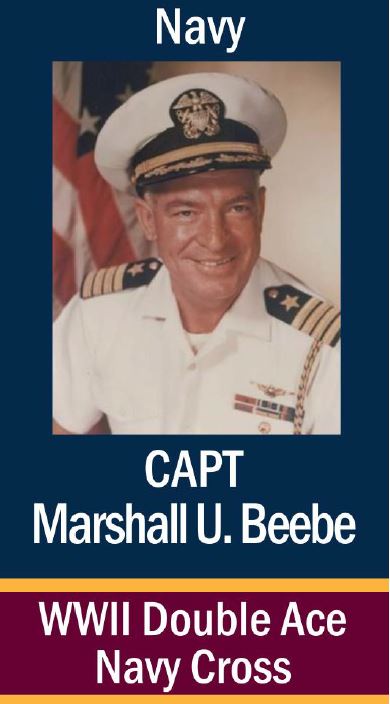 Born in 1913 in Anaheim, California, Marshall “Marsh” Beebe attended Occidental College, graduating in 1935 with degrees in mathematics and physics. A three-year letterman competing in football and basketball, he also served in the California National Guard during this time.

Completing Naval Aviation Cadet Program in Pensacola in 1937, Beebe was commissioned an ensign in the Naval Reserves in 1938. In 1941, he received his regular Navy commission and rapidly began ascending the ranks.

Beebe’s early duty stations included Hawaii, the Philippines, and Long Beach, California. He was assigned to the Bureau of Aeronautics in Washington, D.C., before assuming command of Composite Squadron (VC) 39. Based aboard the escort carrier USS Liscome Bay in the Pacific, the squadron supported the invasion of Tarawa. Surviving the sinking of Liscome, Beebe subsequently commanded V-17, a fighter squadron assigned to USS Hornet. Participating in the first Navy raids on Tokyo in early 1945, he is credited with downing 10 1/2 Japanese planes, five in a single day.

Beebe’s next combat assignment was as commander, Carrier Air Group 5 aboard USS Essex operating in Korean waters. While in command, he met distinguished author James Michener, then a war correspondent who subsequently wrote about Beebe’s Air Group in his famous book, “The Bridges at Toko-Ri.” Michener dedicated the book to Beebe who subsequently served as military advisor for the Oscar-winning movie.

After the Korean War, Beebe commanded USS Pyro and USS Bon Homme Richard and served in senior positions to include assistant director of Flight Test Division, Patuxent River; Naval attaché for Air, Caracas, Venezuela; and head of Airborne Weapon Systems branch of the deputy chief of naval operations. He retired in March 1963 with the rank of captain.

CAPT Beebe lived in Coronado in the early 1950s. He died in 1991 and is survived by his daughter, Kim Duncan.