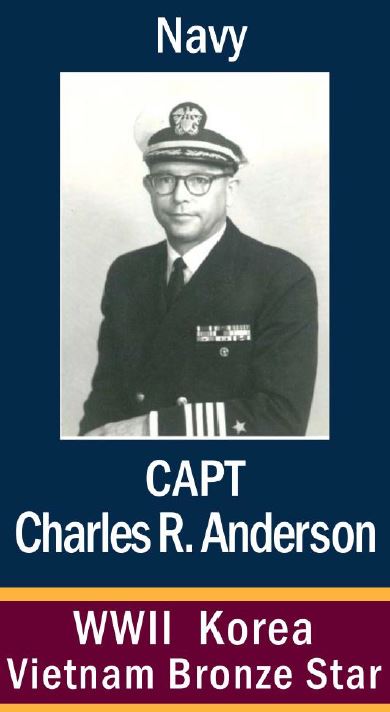 Charles Raymond Anderson was a Coronado resident for 33 years. Born in Long Beach, California, in 1924 to parents Marjorie and Gareld Anderson, he attended Woodrow Wilson High School, California Institute of Technology and the U.S. Naval Academy. He graduated from Annapolis as part of the “Class of 1947 – The Best on the Severn.”

Upon graduation, Anderson taught electrical engineering at the Naval Academy and served on USS Gearing (DD 710). He attended Naval Intelligence School and studied Chinese at the Defense Language Institute. Although he was a surface warfare officer, Anderson, who rose to the rank of captain during his career, had four overseas postings, serving as Assistant Naval Attaché to Taipei and Singapore. He also commanded the Naval Advisory Group of Joint U.S. Military Assistance Group in Bangkok and the Navy Section of the Military Assistance and Advisory Group in Tsoying, Taiwan.

Upon retirement in July 1976, CAPT Anderson served as civilian advisor to the Iranian Navy. He returned to his home in Coronado in 1979 and purchased a 47-foot ketch, “The Resolute,” one of the joys of his life. Sailing, tennis, gardening and travel occupied the rest of his days.

CAPT Anderson loved his country, the Navy and his family; his life reflected this. He is survived by his beloved wife Helen, his two children: daughter Susan Read Anderson, son Dr. Gary Anderson, MD (Debby Crane Anderson); and his two grandchildren, granddaughter Lesley Michelle Anderson, and grandson, Sgt. Brian Christopher Anderson, U.S. Marine Corps. His was a life well spent and his legacy was manifest.

Student Learning and Well Being