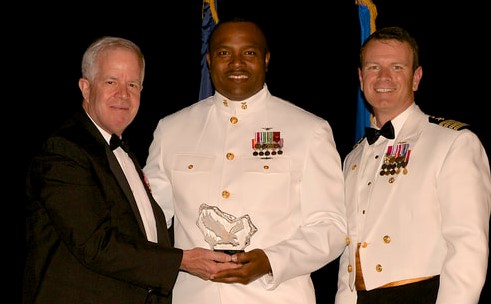 Much of Coronado’s glimmering reputation as the Crown Jewel is due to its rich military history. From active-duty families to retired multi-generational service members, almost every home in Coronado has a direct link to the military.

The Coronado Chamber’s Salute to the Military began in 1985, when United States Navy Captain Ron Kennedy wanted to make a special effort to recognize active fleet military officers and their wives. The formal ball would take place at the iconic and historic Hotel del Coronado. Civilian and retired military Coronadans would host the active-duty couples, for a night of recognition, celebration, and camaraderie.

The Coronado Coordinating Committee had just been formed and the idea was put into reality. The incoming Coronado Chamber of Commerce President, Dennis McCormick, Hotel del Coronado General Manager Scott Anderson, as well as owner Larry Lawrence invested into the idea and the first Salute to the Military was hosted in 1985. USMC BGEN Ret. Ed Meyer had the original idea of a military recognition event, and CAPT Ron Brandquist of NAB invited the active-duty couples.

Today, three distinguished awards are presented. The Captain Harry T. Jenkins Memorial Award recognizes individuals who illustrate principles of courage, sacrifice, discipline and faith. The Vice Admiral James and Sybil Stockdale award recognizes Navy couples who have demonstrated their leadership qualities both professionally and personally. The Vice Admiral Edward H. Martin award honors a current Coronado resident who has served in the military and exemplifies both service to country and community.

Thirty-six years later, the tradition remains Coronado’s only grand gala thanking our local military. This year’s theme of the 2021 Salute to the Military is “The Young and the Brave: Applauding Our Military Kids.” The black-tie affair will be held on the newly renovated Windsor Lawn at Hotel del Coronado on Saturday, August 21st beginning at 5:00 pm. Please visit www.CoronadoChamber.com/Military-Ball or email Kerri Dowling at [email protected] for more information and tickets. Active duty members should contact their command regarding tickets and attendance to the event.

Leadership During A Pandemic: The Coronado Chamber’s Executive Director Sue Gillingham Proves It’s All About Community

Shop Local and You Save More Than Just Money