Coronado High School’s (CHS) mock trial team has participated in the annual San Diego County Mock Trial Competition each year since 2010. Beginning as a club, it is now an A-G approved elective with 17 students dedicated to learning about the law and justice system. Supported and coached by CHS English teacher Ms. Heather Bice along with three lawyers, Ms. Sam Park of the city attorney’s office, Mr. Bob Balfour of the Balfour Law Group, and Mr. Todd Haas, the team practices critical thinking, organization, written and verbal communication, and learns how to reason their arguments and persuade an external party.

“I enjoy teaching the class because I get to work with students as they take ownership over their side of the case, work collaboratively to build an argument, and practice authentic professional skills,” Ms. Bice, who has been the teacher representative ever since the club started, shared. “The students are wonderfully supportive of each other and we have a lot of fun figuring out how to win against the other teams.”

This year, the competition centered around a fictional criminal case involving a social media influencer and a violent break in. Defendant Lee Croddy was accused of burglary, aiding and abetting, and accessory after the fact, which is defined as someone who knows that an offense against the United States has been committed, but comforts or assists the offender in order to prevent his trial or punishment. Essentially, the court debated whether Croddy had influenced one of a YouTuber sensation’s followers, Remi Montoya, into stealing government documents from inspector Drew Marshark.

In the fall, the San Diego County Mock Trial Committee provided this same case to all schools, as well as witness statements, rules of evidence, pretrial materials, and exhibits. Schools then split into two teams to review: a prosecution and a defense team. The case argued was called People v. Croddy in which the defense represented Lee Croddy, the defendant and the accused, and the prosecution, which represented the people. There were nine roles involved in the case: one pretrial attorney, three attorneys, four witnesses, and a bailiff as part of the defense or a court clerk for the prosecution.

Freshman Abraham Berke was one of three defense attorneys representing Croddy. “We spent the better part of the first semester learning the case and everything about it,” he described. “Once we were comfortable with our knowledge of this case, we divided the work that needed to be done.”

His job for the trial was to cross-examine the main prosecution witness, direct examine a lower level defense witness, and deliver the closing statement. Direct examination involves asking a witness a series of open-ended questions intended to develop a logical sequence of events and have the witness tell their side of the story. Cross examination normally occurs after the direct examination, and questions are more specific where the response is either a “yes” or a “no.” This presents another opportunity for an attorney to examine a witness and perhaps discredit the truthfulness of the witness’s testimony, credibility, or knowledge.

After months of each member practicing their assigned role, the class was at last prepared to compete. The competition was formatted so that defense teams were paired up with opposing schools’ prosecution teams and vice versa. After arguing in front of a real judge, each school’s performance was evaluated with three to four scores on a point scale. The top two out of twenty-eight schools moved on to the semi finals. The set days were January 26 and 28, and February 1, 3, 9, and 17. In preparation, the CHS team had scrimmaged online against Torrey Pines, Mission Bay, Cathedral Catholic, and Bonita Vista. Normally, scrimmages and the annual competition would take place in the San Diego Superior Courthouse located in downtown San Diego. This year, however, students participated virtually over Zoom.

“I think I did well; this was my first year in this class and my first year learning anything about the law and organized fashion. One thing that really helped me was our teacher coach and our attorney coaches, who unlike the rest of the class have years of experience with this system. This was very helpful in understanding how the trial would go and what to expect,” Abraham shared.

His biggest struggle during the event was learning the 17 different types of objections made in the courtroom, which are based on the Mock Trial Simplified Rules of Evidence on the California Evidence Code. Due to the strict and professional procedures adhered to in the courtroom, attorneys wanting to raise a formal protest had to follow specific, previously laid-out rules. 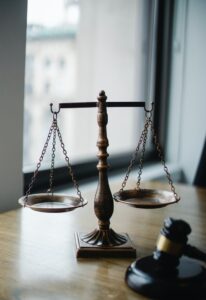 Chloe Schutt is also a freshman and a member of the CHS mock trial team. During the competition, her role was the prosecuting attorney for the prosecution side and she had to prepare the closing arguments. She defended the people against defendant Lee Croddy.

“My first competition was against a school that had won the whole entire mock trial competition last year, so they were a really good and polished team,” Chloe explained. “Our side did really well against them. We were neat and professional, and we did a great job examining witnesses.”

She also shared how despite her nerves in front of the judge, she acted professionally and confidently. “During my second trial, I had a really polished direct examination with our expert witness and was able to properly object the opposing counsel. That really boosted my confidence,” she shared.

Her biggest obstacle during the tournament was finding enough time for her rebuttal. As she was in charge of preparing the closing statements, Chloe’s job was to summarize all the evidence presented in the court in four to five minutes with one minute to respond to the defense attorney’s four to five minute closing. “Since there was so much to say with so little time, I ended up running out of time,” she admitted.

Mr. Balfour also reflected on this year’s experience, “Our kids did a wonderful job! They received many compliments from the judges and attorney scorers. We ended up winning two and losing two, an outstanding performance considering this is the first year mock trial was offered as a class.”

Islanders begin the school year knowing barely anything about the law, and by the end of the year they are acting like seasoned attorneys. This was was “one of the best teams we have ever had,” according to Mr. Balfour.

The CHS mock trial team seeks to provide students with a deeper understanding of the ways in which one’s perspective changes by arguing both the prosecution and defense. It also emphasizes respect for the United States Constitution and the legal system we abide by today.

Ms. Bice shared, “We feel fortunate to have been able to have the competition at all; the San Diego Mock Trial Committee is really wonderful and worked very hard to make this experience happen for students. I hope that students feel more comfortable with how a courtroom experience works and that they understand the complexities of trying a case.”

“From this competition, I’ve learned how to become a persuasive speaker, a better debater, and I actually understand how a trial works. Mock trial has also helped me to understand how laws are used and how both sides will use the law (or not) to defend their claims,” Chloe concluded.

With experience and determination come success and more motivation for the CHS mock trial team’s future lawyers and professionals who have a head start on their career in the courtroom.

Coronado students, teachers and administrators were in it to win it on Wednesday, March 24th at the 34th Annual Coronado Schools Foundation Telethon! It...
Read more
Education

It’s hard to argue with success. And that’s exactly what San Pasqual Academy (SPA) has built over the past 20 years, creating an innovative...
Read more
Education

Over 50 and Love Learning? Zoom Along with the Osher Lifelong Learning Institute at UC San Diego

Over 50 and a Lifelong Learner? Looking for stimulating lectures? Then the Osher Lifelong Learning Institute at UC San Diego is something you should...
Read more

During their fifth official week of matches as part of the CIF winter season, both the boys and girls golf teams celebrated hard-earned victories...
Read more
Crime

The information below is provided weekly from the Coronado Police Department and then summarized for publication. Crimes Reported: Burglary  on Orange AvenueVictim reported garage door lock...
Read more
Sports