In one of the most storied and longest running rivalries, the United States Naval Academy and the United States Military Academy met for the 121st time in the annual Army-Navy football game held on December 12, 2020. For the first time since 1969, the Black Knights of Army shut out the Navy Midshipmen 15-0 and have now won four out of the last five contests. First held on November 29, 1890 in West Point, New York, the event features deeply-rooted traditions, a chance for alumni to gather and reminisce, and has now become a symbol of American pride and military unity for all service members.

Long-standing traditions and memories have shaped the intense rivalry and is evident in the events leading up the game. The “prisoner exchange” is a pre-game activity featuring third-year Cadets and Midshipmen who have spent the semester studying at their sister academy. After living at the opposing school, the students return to their respective academies. Yet another unique tradition is the singing of the national anthem by the Navy and Army choirs. Most football games, including the Super Bowl, spotlight a notable singer or performer. The Army-Navy game centers around its own members instead.

Another custom of the Army-Navy game is the attendance of the current standing president. President Donald Trump was present at the event this year and participated in the pregame coin toss. Other notable attendees in the past include Theodore Roosevelt, John F. Kennedy, Bill Clinton, George W. Bush, and Barack Obama. At the end of the game, both teams’ alma maters are played and sung. The winning team stands alongside the losing team and faces the academy’s defeated students. The phrase “to sing second” comes from the fact that the winning team’s alma mater is played last. This represents mutual respect and solidarity for both teams.

The Army-Navy game has been televised nationally since 1945 and is played on the second Saturday of December. The event also typically marks the last regular-season game played in the NCAA Division I football. The Midshipmen’s greatest victory was in 1973 with a score of 51-0, and Navy’s longest win streak was from 2002 to 2015, an impressive fourteen consecutive years. The Midshipmen currently lead with 61 wins, 53 losses, and 7 ties.

The Corp of Cadets and Midshipmen usually face off in Philadelphia, Pennsylvania. In fact, the Lincoln Financial Field has held 89 out of the 121 games in history. Why? Because Philadelphia is about halfway between West Point, New York, and Annapolis, Maryland. 2020 was the first year since 1943 that the game was played at a home site. World War II was occurring then, but this year travel restrictions were in place and caused the academies to gather at Michie Stadium in West Point with no spectators. 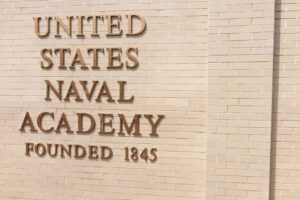 Longtime Coronado resident Joseph Rainey graduated from the Naval Academy with the class of 1982. His earliest memories of the fierce competitiveness between the two schools was when he was just four years old. His father, an academy graduate from the class of 1948, had been watching the game on television when Rainey declared, “I’m rooting for Army.” He soon found out that this was not going to be an option in his household. The rivalry became even more personal when Rainey’s brother followed his father’s footsteps and became a Midshipman. After attending the Army-Navy game in person in 1969, 1970, and 1971, he knew it would become a lifelong tradition.

In 1978, Rainey entered the Academy as a plebe (freshman). From day one, he and his classmates were drilled in the use of the most frequently shouted phrase: “Beat Army!”

“We yelled it when we ran down the halls of Bancroft Hall, we yelled it at every meal, and every day seemed like an emotional build-up to the rivalry game in Philadelphia. It was the centerpiece of every midshipman’s calendar and plebes were required to be the spirit leaders of the Brigade,” Rainey recalled.

When the week of the game finally arrived, Rainey described his classmates as filled with “fever pitch.” Midshipmen traveled to Philadelphia in buses, and Rainey emphasized the intense energy of his fellow midshipmen as they screamed themselves hoarse chanting the Navy’s spirit cheer – “NAVY… go Navy, FIGHT!”

Recounting his experiences watching in-person, Rainey proclaimed, “After you graduate from Navy, you never miss the game, usually sharing it with fellow alumni at gatherings as big as several hundred. Watching it alone this year was as disappointing as Navy’s loss.”

Despite the setback, Rainey prefers watching the game in-person rather than on television.

“There is no greater, in-person experience in sport than the Army-Navy game. TV doesn’t capture the march-ons, the spirit pranks, and the non-stop standing, jumping, cheering, noise, and enthusiasm from both the Corps of Cadets and the Brigade of Midshipmen during the game and through the TV timeouts,” Rainey described. “There are few sporting events, or events of any kind for that matter, that evoke a similar sense of pride in America and being American.”

For him, viewing the event without his fellow alumni was a different experience and somewhat disappointing. With the enthusiasm of the crowd taken out of the equation, it certainly was a unique ordeal. Despite the contrast, Rainey was still grateful that the Brigade of Midshipmen and the Corps of Cadets were able to attend.

“I’ll speak for myself, but I think anyone who attended either academy still sees this as the most cherished and important sporting event of the year. But nothing, nothing, will ever compare to the excitement and pride I was fortunate enough to experience watching the Army-Navy game in person as a Midshipman. It was, is, and always will be, the greatest sporting event in the world to me,” Rainey concluded.

Naval Academy class of ’61 graduate and Coronado local Bob Sheridan shared a similar experience of watching the game. Since retiring in 1986, he has celebrated the annual event in the company of classmates, shipmates, and friends. More recently, members of the class of 1961 in the general San Diego area would convene at the San Diego Yacht Club every year to view the game. Sheridan does not own a television, and was informed of Navy’s loss by a phone call instead. This was his first time since graduating that he missed following the event live, either in-person or virtually.

“The game is a big part of going to either academy. The Midshipmen took trains up to Philadelphia for the game while the Cadets rode buses down from West Point. It was always cold, and we stood stamping our freezing feet the whole game. The buildup was tremendous for close games of 1958 through 1961 while I was at Navy,” he shared. “There was great bonding between cadets and midshipmen around this annual test. Would we steal their mule, or would the army make off with Bill the Goat? But at the end of the game, we all stood together, Army and Navy, and sang our alma maters, winners last.”

The next Army-Navy game is scheduled to be held on December 11, 2021 at MetLife Stadium in East Rutherford, New Jersey. Although this year’s match was certainly one for the ages, Midshipmen and Cadets’ school spirit was not dampened by the impacts of COVID-19. The intense and long-standing rivalry continued again for another year, old memories were rehashed, and new ones formed.

Walk, bike, surf, or run. If you noticed more of your neighbors outside exercising last year, it wasn’t because the gyms were closed. Almost 3,000 people committed...
Read more
People

In the over 100 years that Coronado High School has existed, it has produced many NCAA athletes in every sport offered at the school....
Read more
People

Sports. For many, the games that we grow up playing as children help shape our lives and mold us as individuals. And for local...
Read more
Community News

The Princeton Tigers men’s tennis team has been staying at the home of Jennie Portelli on Glorietta Boulevard for the past three months while...
Read more

The information below is provided weekly from the Coronado Police Department and then summarized for publication. Crimes Reported: Disturbance at Brigantine on Orange AvenueGeneral disturbance reported....
Read more
Community News

‘Tis the Season for Pet Safety

In the midst of the holiday season, it is important for pet owners to keep the health and safety of their animals in mind...
Read more
Crime

The information below is provided weekly from the Coronado Police Department and then summarized for publication. Crimes Reported: Petty Theft on Palm AvenueVictim reported vehicle burglary...
Read more
Crime

The information below is provided weekly from the Coronado Police Department and then summarized for publication. Crimes Reported: Petty Theft on Orange AvenueSuspect shoplifted. Total loss...
Read more
Crime

The information below is provided weekly from the Coronado Police Department and then summarized for publication. Crimes Reported: Battery at Sharp Coronado HospitalPatient involved in a...
Read more
Crime

The information below is provided weekly from the Coronado Police Department and then summarized for publication. Crimes Reported: Vandalism Report on Silver Strand BoulevardBird sanctuary was...
Read more
Advertisement
Advertise Here (Get Rates)